With that, NVIDIA is introducing a new product line today that is aimed ONLY has the HPC market — these are not simply graphics cards with a higher price tag.  The brand will encompass three different form factors: a desktop add-in card, a deskside computer and a rack mount server. 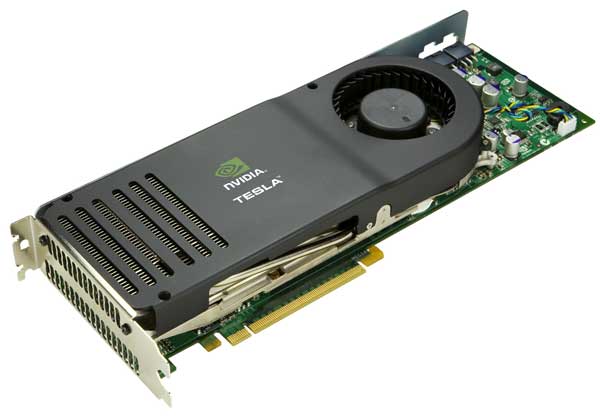 Here is the desktop card add-in for the Tesla line: the Tesla D870.  As you can clearly tell, this is basically the same form factor as the current 8-series graphics cards with a similar heatsink and fan combination though without any kind of external connectors.

You definitely won’t be using the Tesla D870 as a graphics card but without those connectors the card does have slightly improved cooling capability with two air vents in the same 2-slot cooler design.

The desktop cards will still use a PCI Express x16 connection for the data connection to your workstation, so you’ll need to have two x16 slots if you plan on adding one to your system as your primary graphics card will require one as well.  The power connections for the D870 include the same dual 6-pin PCIe connections we have seen on the 8800 GTX graphics cards. 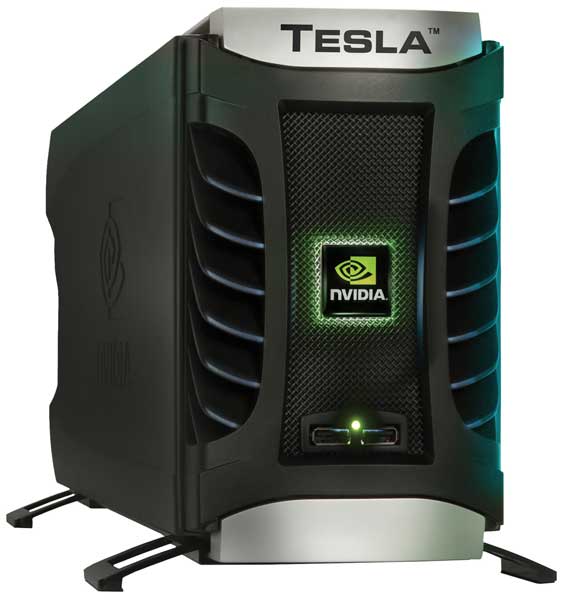 In a very similar vein to the NVIDIA Quadro Plex product that was released earlier in the year as an external graphics processing power house, the Tesla C870 is a deskside supercomputer.  This external unit will contain 1 or 2 Tesla D870 cards working together on HPC data and will connect with a desktop workstation or server through a PCI Express x16 adaptor card installed in the user’s main system.

While the desktop/workstation parts are definitely interesting in their own right, NVIDIA knows that to really make a dent in the HPC market they need to have a killer product in the rack mount form factor that IT professionals know. 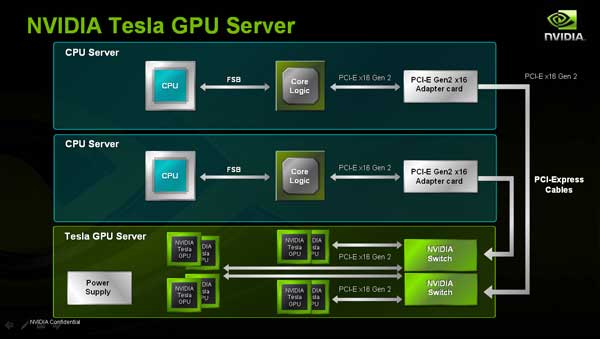 This diagram shows how the Tesla server configurations will work – one or more Tesla rack mount solutions working with one or more standard CPU-based servers that have PCI Express 2.0 x16 cards in them for communication with the Tesla servers.  NVIDIA has said that to get the best efficiency out of these Tesla servers, there should be one CPU core per GPU core; that would mean a 4×4 server (16 cores) could support up to 16 GPUs (2-4 servers). 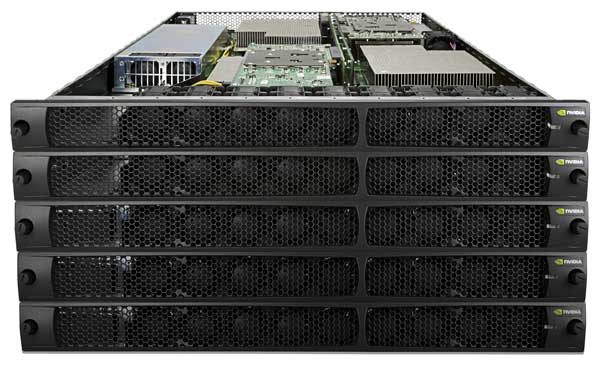 Here are a couple of combinations of NVIDIA’s actual rack mount hardware – a 3U and a 5U unit. 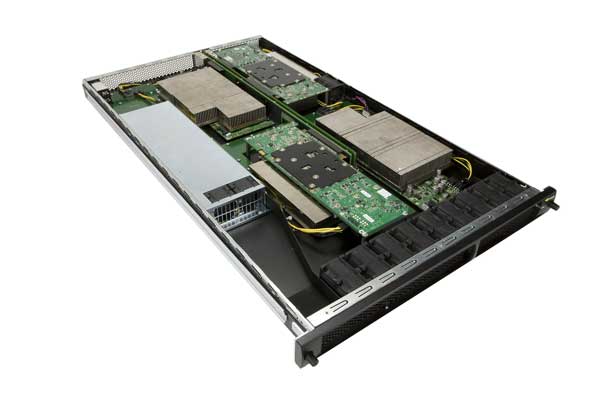 Here is a single 1U break down of what is actually inside these servers; a power supply, GPU cards and fans.  Not much to it really.  The separate GPU cards feature just heatsinks on them and the bank of small fans along the front of the server are responsible for air flow to keep them cool.  NVIDIA has integrated fan state and temperature management via an on-board controller so IT can monitor their status remotely and that the GPUs can slow down in case of overheating.

These 1U units will support either 4 GPUs or 8 GPUs; the 8-core version will be using dual-GPU boards that are not yet available but will be soon.

The rear of the server has a single power connection and two connections – one data connection can support up to 4 GPU worth of data.

There isn’t much located on the front of the Tesla S870 units but you can bet that bank of fans is going to be loud!

What GPU are the Tesla Products Using?

If you are under the assumption that the GPUs inside the Tesla servers and on the add-in cards were identical to current generation 8-series GPUs, then you’d be right; the Tesla cores are based on the G80 architecture.  This new GPU has 128 shader processors that run at 1.35 GHz and an 800 MHz memory clock.  Those SP specs are the same as those on the 8800 GTX graphics card, though the memory speed is a bit lower.  NVIDIA claims that the HPC computing data is not as sensitive to memory speeds as graphics processing, thus NVIDIA was able to lower the speeds slightly but double the memory per card to 1.5GB; yep 1536MB.

While the current Tesla solutions based on G80 are only capable of single precision floating point (32-bit), NVIDIA understands that double (or full) precision calculations are the bread and butter of high-performance computing where the most minute details and round-off errors of calculations can compound upon themselves almost indefinitely, and subsequently the company has double precision parts scheduled before the end of the year.

Interestingly, looking at the NVIDIA forums themselves for data on GPUs and 64-bit floating point support revealed a thread where an NVIDIA rep says double precision parts will be available in late 2007:

A: CUDA supports the C “double” data type. However on G80
(e.g. GeForce 8800) GPUs, these types will get demoted to 32-bit
floats. NVIDIA GPUs supporting double precision in hardware will
become available in late 2007.

Obviously we can expect new GPUs from NVIDIA this year that will add double precision floating point math into the GPU and thus Tesla will see a similar upgrade then as well.

Pricing Schemes – save your pennies!

Of course, none of this new technology is free; but NVIDIA does seem to have a significant price/performance advantage over other HPC solutions.

This table breaks down the different Tesla options that NVIDIA is introducing today, their pricing and their pure floating point performance.  Each GPU is capable of approximately 518 Gigaflops of processing power with 170 watts of max power usage.  Those GPU cards will sell from NVIDIA for approximately $1500 each and the deskside supercomputer will sell for $7,500 with a pair of the cards.

The Tesla S870 servers are the most impressive in terms of performance as they are able to push 2 Teraflops with four GPUs and theoretically as much as 4 Teraflops when they release their 8-GPU version of the Tesla server.  These compact processing power houses will come at a cost of $12,000; while that might seem like a very high cost to consumers, for the HPC market the amount of processing power for that price will be very appealing.

One interesting note here is that all of these products will be sold by NVIDIA and branded as NVIDIA parts; at least initially.  They hope to allow system builders in the server market to license and sell these HPC components eventually, but for now, NVIDIA is on their own.

If you are looking to acquire some of this unique hardware yourself, you’ll have to wait just a bit as this isn’t one of the traditional NVIDIA hard launches.  Both the add-in card and the deskside supercomputer should be available in the August time frame; for the servers you’ll have to wait until November or December to place your orders.

Many have wondered where the future of NVIDIA rested now that AMD has gobbled up ATI and Intel has made it clear they are going to enter the massively-parallel processor market very soon.  Theories of NVIDIA’s demise have been greatly exaggerated, it would seem, at least if NVIDIA’s push in the HPC market is successfully.  Make no mistake, NVIDIA will continue to push the envelope in the world of graphics for the gamer and developer, but they know that alone will not keep their business model alive for years down the road as the competition evolves.  The Tesla line of products is an attempt to wedge their foot into a market of billions of dollars where high-performance computing is needed and where they see their product line can offer an advantage.

If you have comments on this article, please join in our discussion in the forums!!

Be sure to use our price checking engine to find the best prices on the ATI Radeon HD 2900 XT and NVIDIA GeForce 8800 GTS 640MB, and anything else you may want to buy! 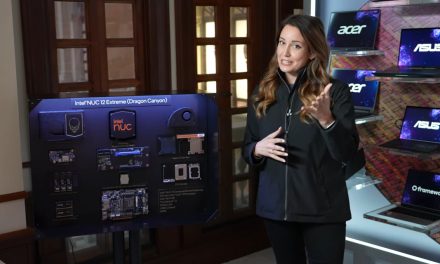