Focus from both NVIDIA and ATI on the world of video processing has been heating up since early 2000s and we are seeing more and more of their marketing pushes going towards video features rather than gaming features.  Why?  Video processing is big business, big money and big opportunity!

With the advent of Windows Vista, that requires a GPU to function completely, and the ineptitude of modern processors in handling decoding of next-generation movie disc (like HD-DVD and Blu-ray), all computers in the near future are going to require a decent graphics chip in them for the first time.  Note I said ALL.  All equals a lot of sales and money that AMD and NVIDIA are competing for. 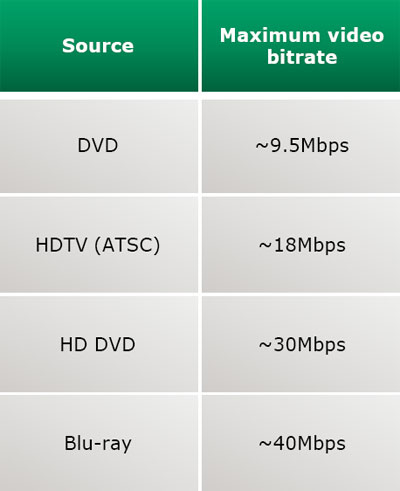 These are some typical bitrates that you might find on video available today: the higher the bitrate, the more processing it takes to decode it and display it to the user.  ATI’s Avivo technology has typically been on the leading edge of video processing and post-processing, but NVIDIA’s PureVideo technology has been countering and leading in some cases.  The world of HD video is the most recently battleground, and now that standard definition video is about as good as it can get; HD content is getting all the glory.

If you read over my look at NVIDIA’s recent GeForce 8600 series launch, this diagram is going to look familiar to you.  This is a breakdown of the various steps required to decode and playback an HD-DVD or Blu-ray disc and what parts of it are handled by CPUs and GPUs.  At the very top is the system that ONLY has a main CPU to handle HD decoding while the second row shows the GeForce 7-series of GPUs and the 8800 cards support for off-loading decode work.  The problem is that the most straining part of the decode process is in step one: bitstream processing and entropy decode — previous generations of Avivo even touch it.

The new Avivo HD though is able to handle the decode process from start to finish, just like the GeForce 8600 cards.  This will give users lower CPU utilization and lower power usage while playing back HD content. 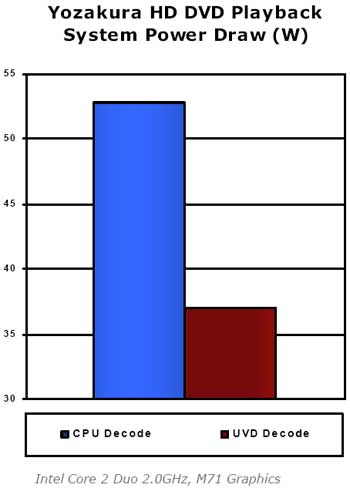 Here is an example of the power usage savings you’ll see with the new HD 2000 series: when the CPU is decoding the entire process the system pulls over 52 watts while with the new UVD (unified video decoder) in the HD 2000 the power consumption is just over 35 watts.  That means less heat, less noise and longer battery life (for mobile units).

Update!!!  The HD 2900 GPU does not actually have the UVD login on it, as Tech Report first found out; instead, AMD claims that the powerful SPs on the HD 2900 are fast enough to handle all the decoding for HD-DVD and Blu-ray titles.

Another great feature that the HD 2000 series of cards is bringing is support for integrated HDMI connections.  HDMI (high definition multimedia interface) is a single cable interconnect that can transmit both video and audio, supports all current HD resolutions and is on nearly all modern TVs.  We have seen HDMI support on some past AMD and NVIDIA cards but there has always been one problem: audio. 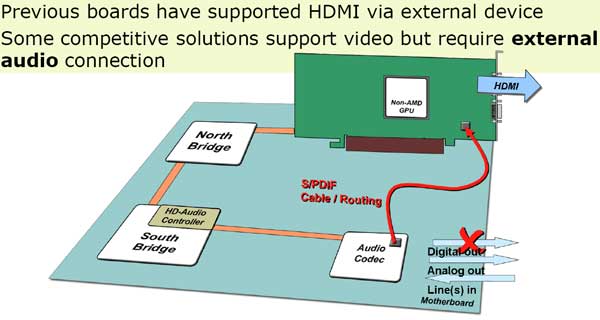 Even though one of HDMI’s best features is support for both audio and video on a single cable, the trick has been getting the audio and video together inside a PC in order to have a single source output.  In current systems that use HDMI you are required to run an optical cable from the audio output to an optical input on the video card that can be combined into one HDMI output.  This is a hassles, adds to clutter and was prone to not working. 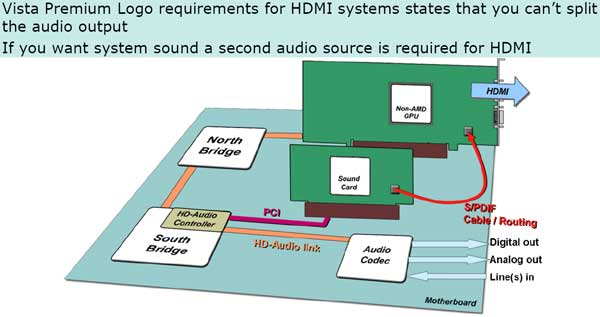 With Windows Vista and its native support for HDCP (copy protection) even that wasn’t an option and you were forced to use a second audio source if you wanted any kind of HDMI support. 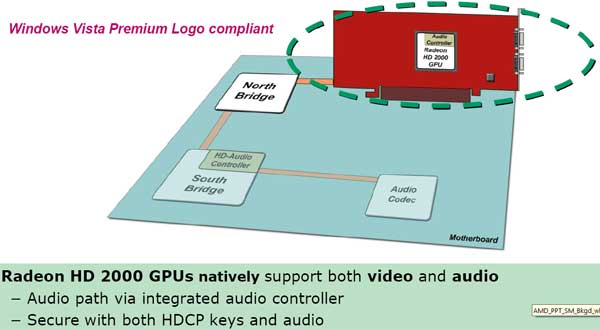 AMD decided to solve that problem by integrating an audio controller directly into the GPU to act as the pass through for digital audio output over HDMI.  Their solution is HDCP compliant as well as Vista compliant as it supplies an encrypted path for the audio data across the entire pathway.

This new audio controller installs a new driver and works with both Windows XP and Windows Vista with support for AC3 (5.1) compressed audio streams like Dolby Digital and DTS; just don’t expect support for the NEW codecs like TrueHD, etc. 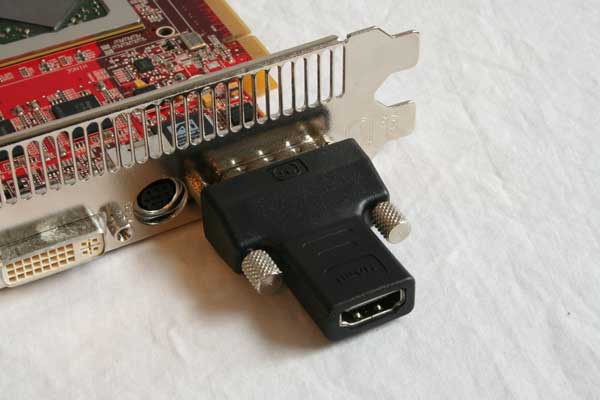 Here is the HDMI adaptor that comes with all the supporting HD 2000 series cards; looks simple enough.  You might wonder though where the audio comes into play??  It actually is sent over the DVI port and simply pin-out-converted to HDMI via this included adaptor.  I was told that you’ll still be able to hit the highest resolutions the graphics card supports in video output when audio data is also being sent though with current HDTVs maxed at 1920×1080, that shouldn’t be a problem for a LONG time.

This will surely help the adoption of HDMI for PC users as ALL of the Radeon HD 2000 series will support these HDMI features.  Add that to the fact that card vendors won’t have to spend the time to specifically develop an HDMI version of card and you have a happy ecosystem.