XFX sent along their nForce 680i SLI to show off the support for Intel’s new 1333 MHz FSB processors — of course we had to overclock it and see how it performed. Should this be your next upgrade motherboard?

Intel’s latest 1333 MHz processors have been all the rage lately — take our review of the new Core 2 Extreme QX6850 processor for example.  Sure it’s expensive, but it’s also the fastest desktop CPU we have ever tested.  If you were looking for something more on a budget, the Intel Core 2 Duo E6750 might fit the bill with its under $200 price tag.  If you have plans of building a new Intel-based PC today, there is no point in NOT getting one of the 1333 MHz FSB processors; done and done.

In all of our initial testing of the 1333 MHz FSB CPUs from Intel we used Intel’s own P35 chipset as the platform.  NVIDIA was quick to point out that their own nForce 680i SLI and 680i LT chipsets have had support for Intel’s 1333 MHz FSB processors since day one.  In fact, XFX sent along a 680i SLI motherboard just to prove the point, with an updated BIOS for overclocking testing as well.  Let’s see how impressed we are.

The layout of the XFX nForce 680i motherboard might look pretty familiar to you — it is identical to the EVGA and BFG motherboards that sport the same chipsets. 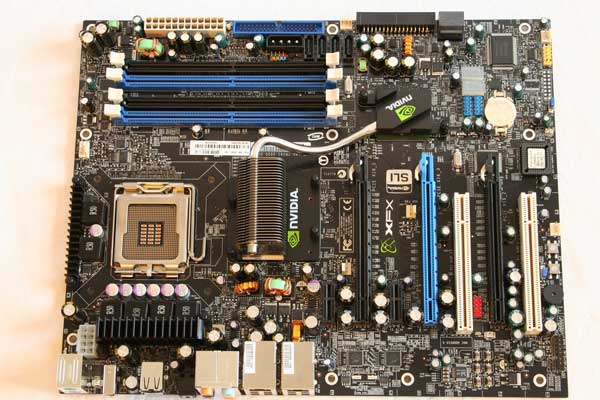 These motherboards are actually designed and built by NVIDIA, then re-badged and sold to the consumers buy NVIDIA board partners, like XFX. 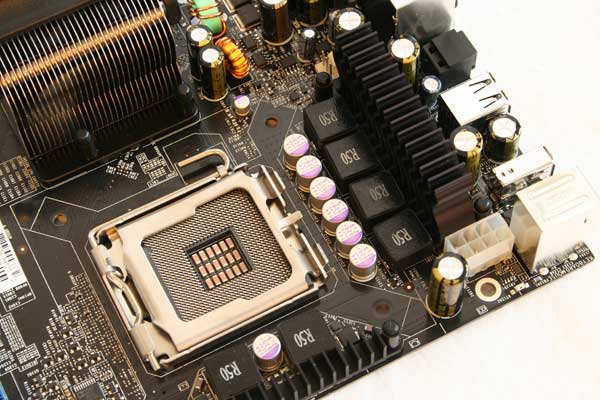 The CPU socket has plenty of clearance for various cooling solutions including larger heatsinks than stock as well as water cooling, which we traditionally use on our test bench for noise concerns.  The 8-pin ATX CPU power connector seen here is still in what I would consider a bad spot as it is difficult to get to being as surrounded as it is. 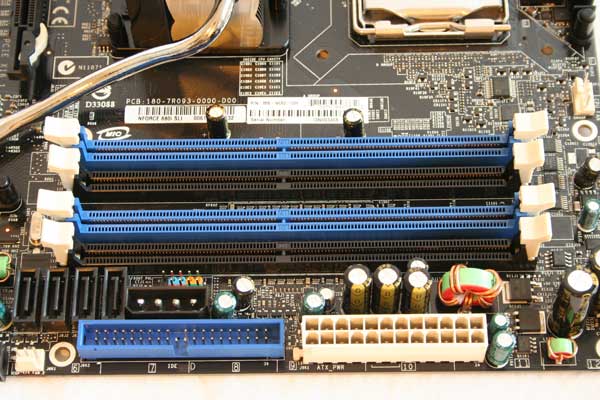 The four DIMM slots here support DDR2 memory at up to 800 MHz officially, though NVIDIA pushes the claims of support for DDR2-1200 memory with their “SLI Memory” technology.  Basically, the BIOS on the board can auto-overclock memory modules that have SLI Memory technology on them and set it to top speeds without user intervention.

You can see the single IDE connection here as well as the 24-pin ATX power connector for primary board power. 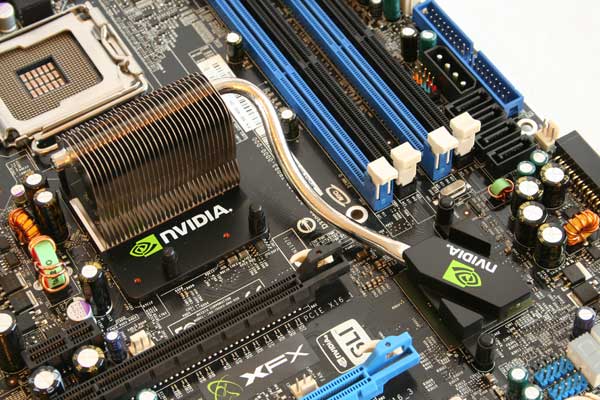 The nForce 680i SLI chipset is covered by a connected heatpipe cooler that sports the NVIDIA brand.  While NVIDIA is confident that the chipset can run just fine in this passive cooling mode… 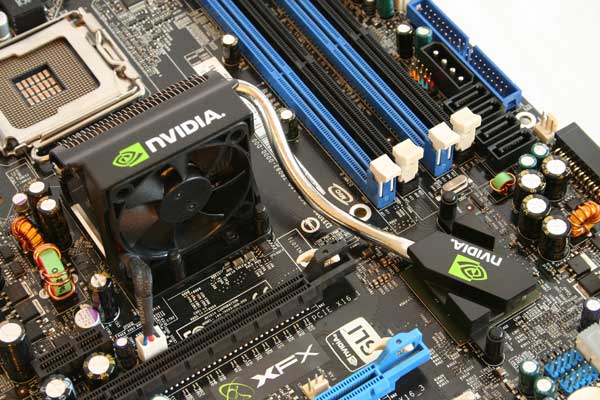 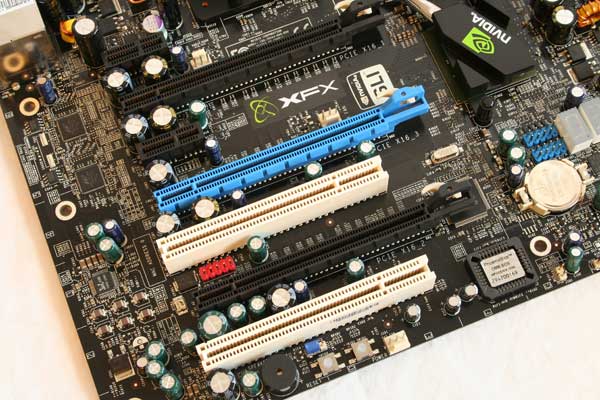 The expansion configuration of the motherboard consists of three PCIe x16 physical slots, though only two of them (the black ones) actually have full x16 PCIe bandwidth.  The third, blue connector runs at a x8 PCIe speed and is supposedly going to be used once NVIDIA’s 3x SLI configurations come out support physics and what have you.  We’ll see…

The board also has two x1 PCIe connections and two legacy PCI slots for other accessories though you should note that have dual-slot coolers on the graphics card (or cards if you run SLI) will cut out both a PCIe x1 slot and/or a legacy PCI slot. 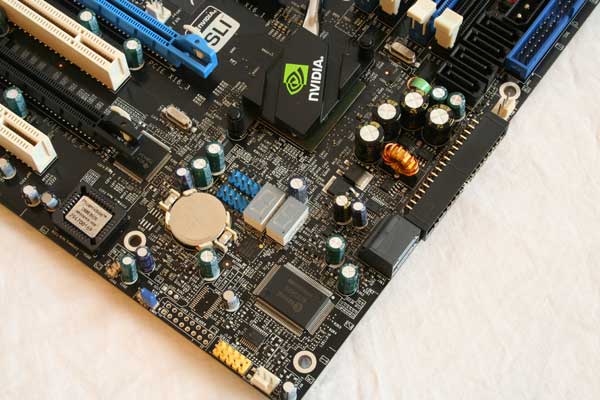 The bottom of the XFX nForce 680i SLI motherboard holds some nice features including additional USB and Firewire headers (to add extra ports to the computer) as well as the LED POST indicator lights for help with boot up trouble shooting.  Though you can’t see it in the picture, under the last legacy PCI slot there are dedicated power and reset buttons already on the motherboard for users that have either open cases or prefer to setup the hardware in an open environment before installation. 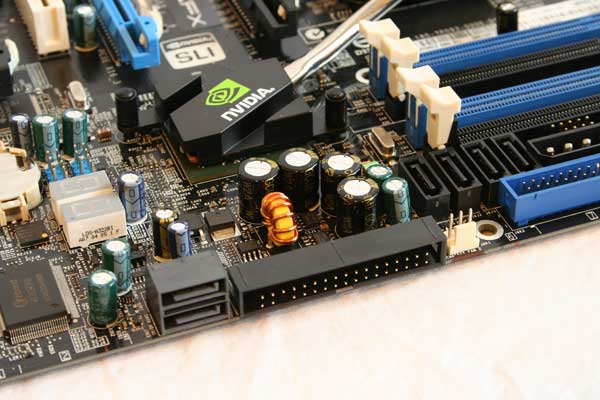 The storage options on the board are rounded up in this shot that shows the floppy connector and six total SATA 3.0 Gb/s connections, two of which face OUT from the motherboard to avoid conflicts with longer PCB-based graphics cards that might go over them. 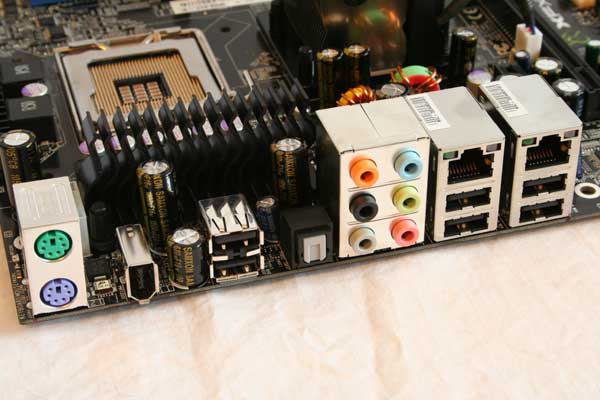 The back panel connections give away the rest of the features the high-end XFX nForce 680i SLI motherboard sports including dual Gigabit Ethernet, 8-channel analog audio and optical digital outputs, six USB 2.0 connections and a single Firewire connection.  Legacy PS/2 ports are included as well, mainly I think for KVM support. 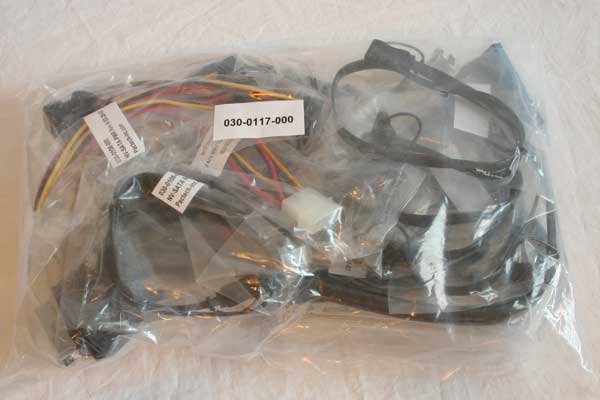 The massive back of cables you get in the box with the XFX nForce 680i SLI motherboard is impressive! 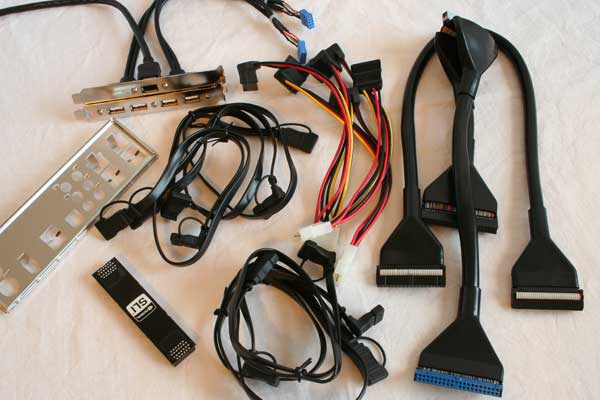 You get pretty much everything you need right out of the box including and IDE and floppy cable, six SATA cables, six SATA power adaptors, a USB and Firewire dongle for extra ports, back panel plate and SLI connector. 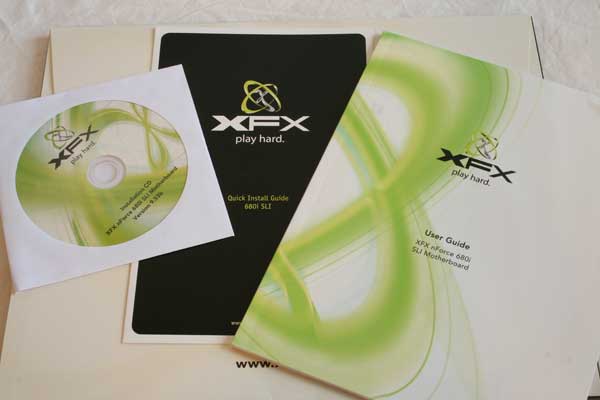 The drivers, manuals and installation material is standard across all the NVIDIA-built 680i motherboards and is of good quality — you won’t have to worry about poor translation from Chinese with these books.