AMD’s Barcelona launch is today and they are holding press events at several places across the world. We got a hold of their presentation early and have posted here for you to see along with our comments and theories about the processors.

While we aren’t attending the upcoming Barcelona processor launch events throughout the world today, we still were able to the presentation that is going to be shown before hand.  This isn’t much more than marketing speak as the technical details are often considered “too much” for national press to digest; hopefully we’ll get some time to play with the processors and get the more detailed information soon.

For now though, I’ll let you browse through what AMD is making public today and leave my comments where I feel they are applicable. 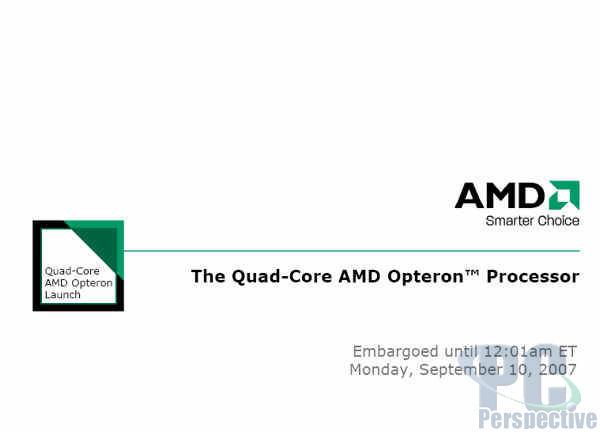 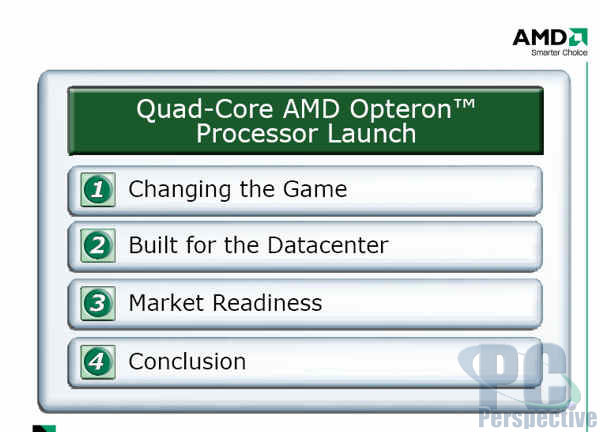 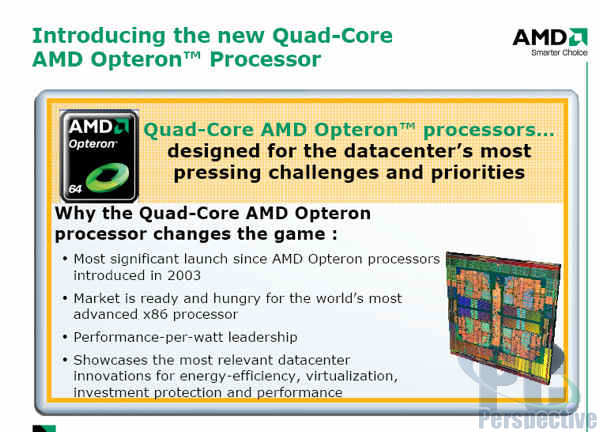 There is no doubt that the new Barcelona, native quad-core design launching today is key for AMD’s future — maybe even more so than the original Opteron launch due to AMD’s current finances.  The only interesting note on this slide though is that all of the quick bullet points avoid claiming any kind of performance superiority. 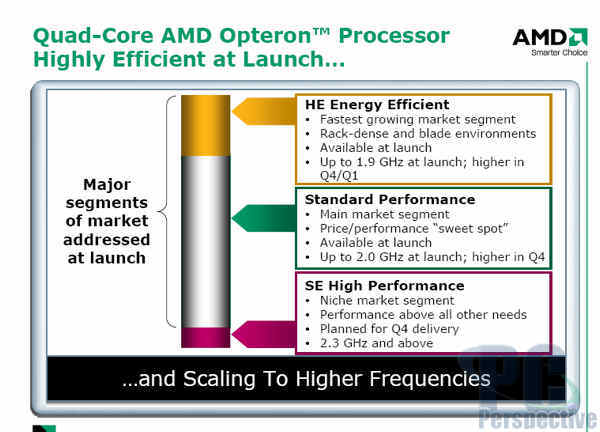 There are going to be three different types of Barcelona-based Opteron processors: those focused on low power consumption, those focused on higher performance (frequencies) and those that fall in between.  You can see in the slide that the SE models are not going to be available today but instead will show up at the end of calendar year and should be clocked at around 2.3 GHz.

I am curious to see why AMD calls this a “niche market” — is the power consumption of CPUs at this speed going to be THAT much higher than the HE or standard models? 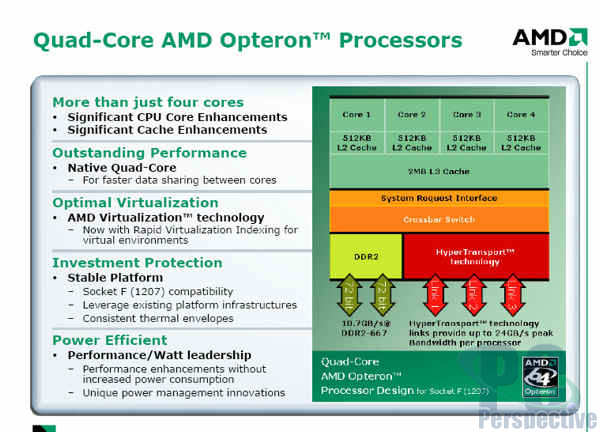 This slide sums up the technical changes in the new native quad-core Barcelona core design including core changes, cache enhancements and more.  The diagram (though a bit blurry) shows four cores each with 512KB of L2 cache and a shared 2MB L3 cache connected to the Crossbar and a DDR2 memory controller. 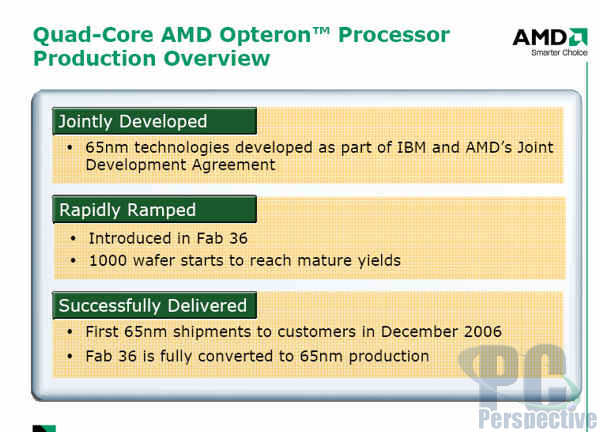 All the upcoming Barcelona processors are of course going to be built on the 65nm process technology developed by AMD and IBM. 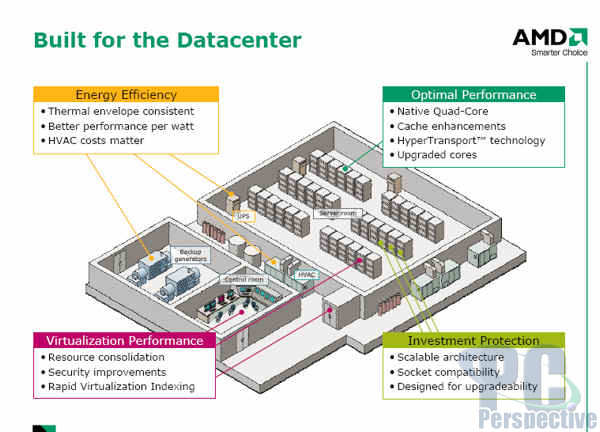 Showcasing the advantages that AMD claims the new Opteron processors are going to have in the business data center; pretty self explanatory self promotion. 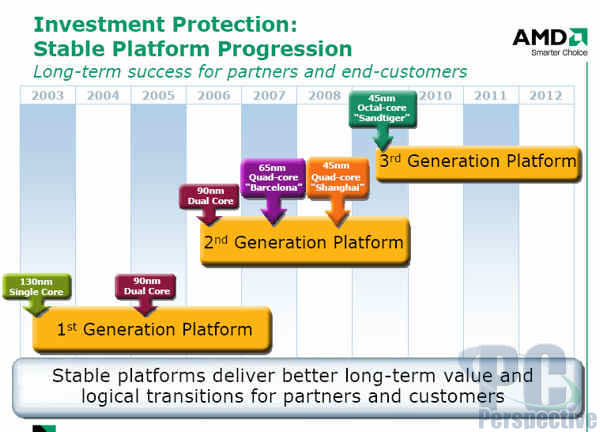 AMD toots their horn on the stability of their platform, currently in the 1207-pin derivation.  What you can gather here is that we’ll see 45nm updated to the Barcelona core sometime in late 2008 and then a new architecture coming in 2009 called “Sandtiger”. 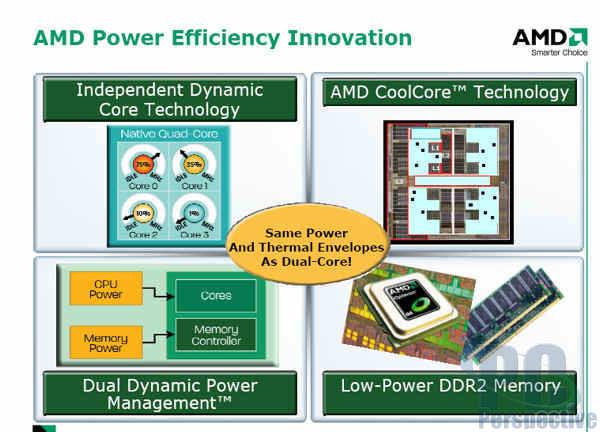 AMD’s Barcelona core has the ability to dynamically adjust the power going to the CPU and memory power of the CPU cores and each core can be dynamically used as performance is needed. 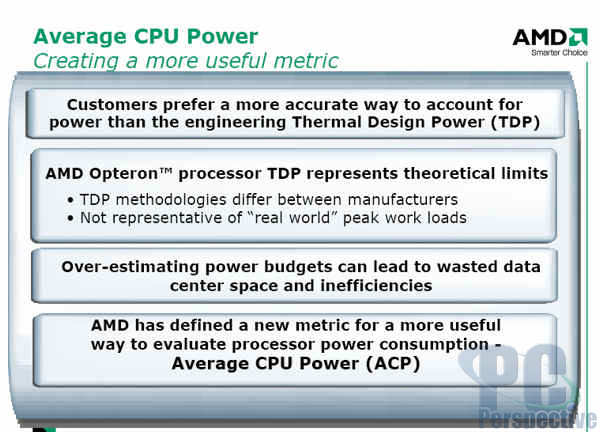 This is pretty interesting information here — AMD is again attempting to create a new metric for processors called ACP: Average CPU Power.  Instead of basing decisions on TDP, AMD wants customers to use this ACP that combines power consumption models and real-world benchmarking results.

I can’t help but assume this is another one of those “standards” that’s going to not be adopted by other major players in the market.  There is more detail on the ACP model at the end of the slides we’ll show you.