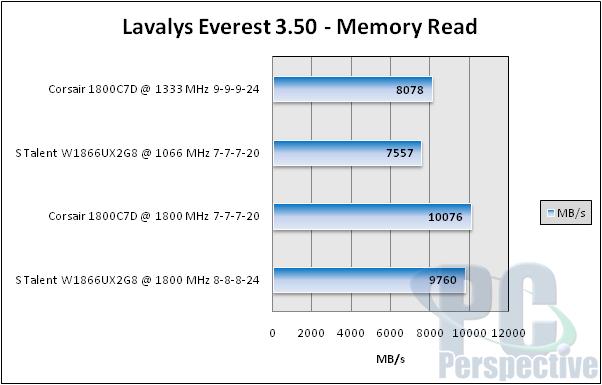 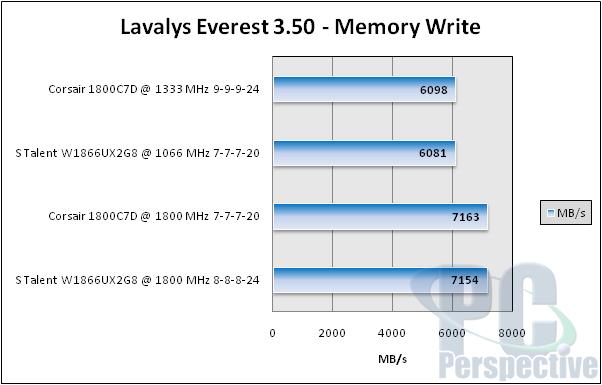 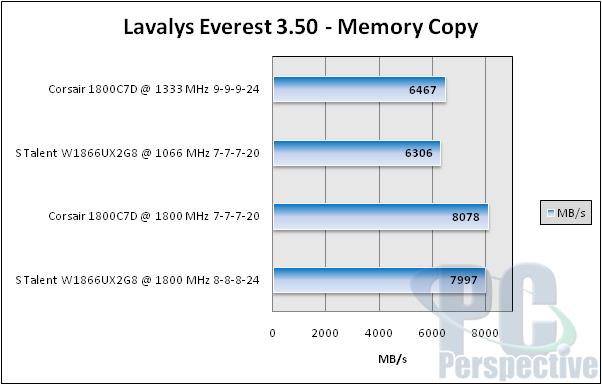 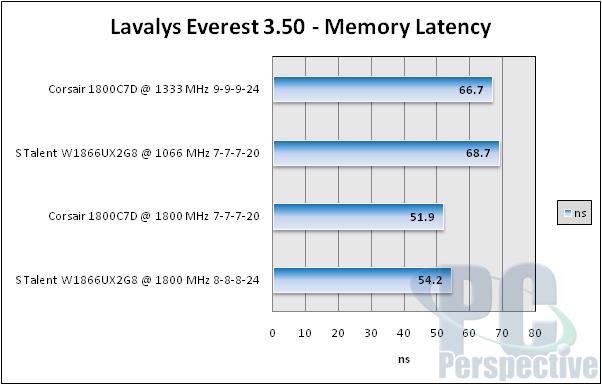 The read, write, copy and even latency tests in the Everest suite show the same results that SiSoft Sandra did with the Corsair Dominator 1800C7D modules taking the win at stock speeds and in their overclocked state.  The Corsair modules did cross the 10 GB/s barrier at 1800 MHz too – a first for us!

Memory testing is a world all in its own; the benchmark results we showed you with SiSoft and Everest could pretty much have been predicted fairly accurately after we completed our initial memory settings testing.  We KNOW that memory that runs at a faster frequency is going to perform better and we know that two memory setups at the same frequency where one has a lower latency levels will differ as well.  So what good was the testing then?

First, we know now that both Corsair’s and Super Talent’s high speed memory kits are able to outpace the latest DDR2 memory setups when they are run at the 1800 MHz+ speeds they are rated at.  The deficit that is accepted by increasing the latencies on the modules to reach these speeds was less than we expected and allowed the memory to run at such high speeds.  The latency results showed that even in the random access cases that the higher speeds with slower latencies is the highest performing setup for the time being.  That might change in the future when the ultra low latency modules finally show up. 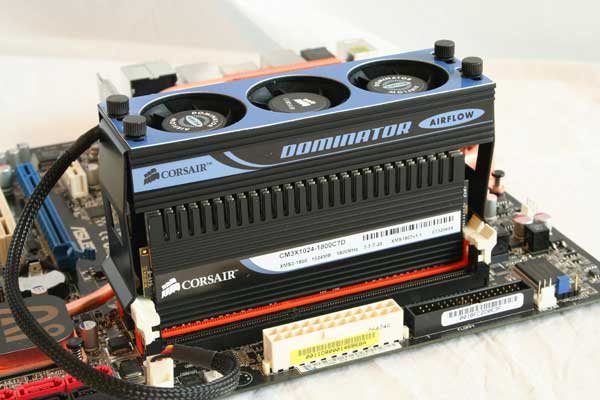 The only let down in my testing was the inability of the Super Talent modules to reach their stated 1866 MHz clock speed at the settings that they claimed it would.  Yes, we did test these on different motherboard than Super Talent uses for their memory validation, but I think that actually makes MORE sense for the media in a testing configuration.  The Corsair modules didn’t have any difficult at all and setting the BIOS options the first time resulted in a successful system boot.  I will not try to insinuate anything else from these results other than the modules we received performed in this way – you’re mileage will vary.

Pricing is a different matter altogether and is the bane of new technology introductions like this.  When DDR memory first was released, it was markedly more expensive than SDRAM; same for DDR2 and now DDR3.  But has the pricing started to level out yet?  Though currently out of stock, the Corsair 1800C7D memory (with cooling fan) has a selling price of $645 for a 2GB kit – that is well over what you would pay for top of the line DDR2 modules.  The Super Talent 1866 memory we tested is going for a very similar $599 price right now as well.  For comparison, what I consider to be one of the top of the line DDR2 2GB kits, the Corsair Dominator PC2-9136 kit is selling for about $375.  Obviously, the premium on the DDR3 market continues for a while longer.

In the end, my experiences in the last several days with these DDR3 memory kits has definitely improved my outlook for DDR3 memory and its future acceptance by the enthusiast crowd.  Until this article, I was still behind the push of DDR2 memory at 800 MHz being the best overall solution for the consumer, but if you are indeed looking for the best performing option for your system, DDR3 looks like the way to go.

If you have any questions, comments or want to see what others are saying about this review, head into our memory forum to discuss!!!

Be sure to use our pricing engine to find the best prices on the Asus Blitz line and anything else you might need: 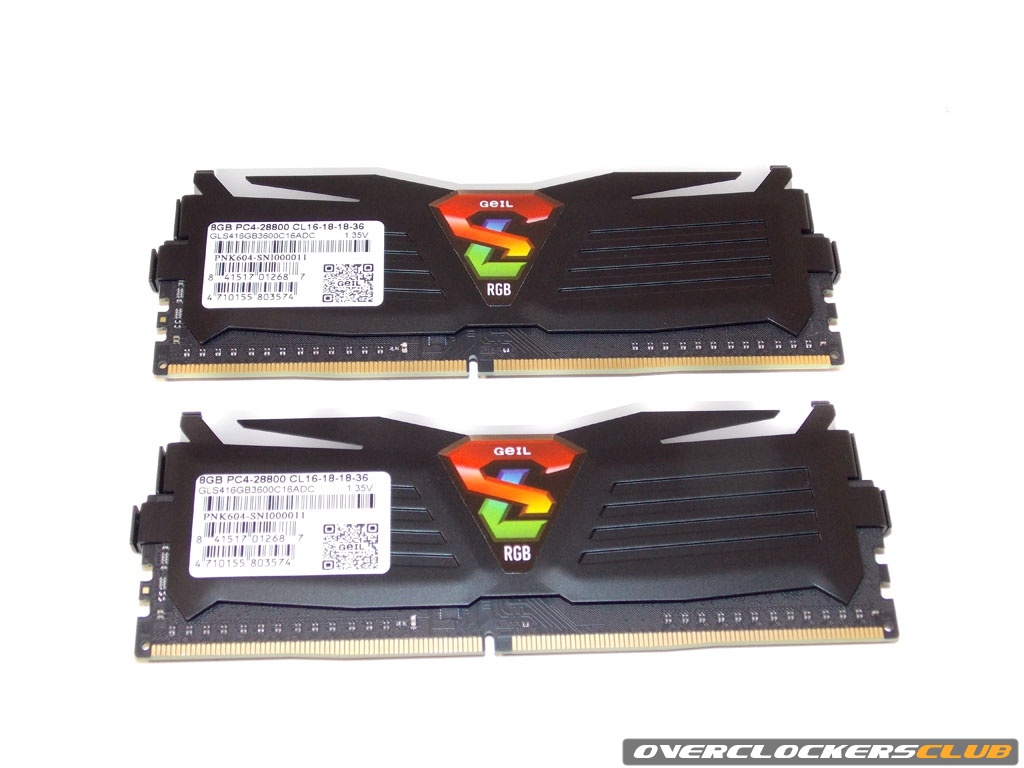 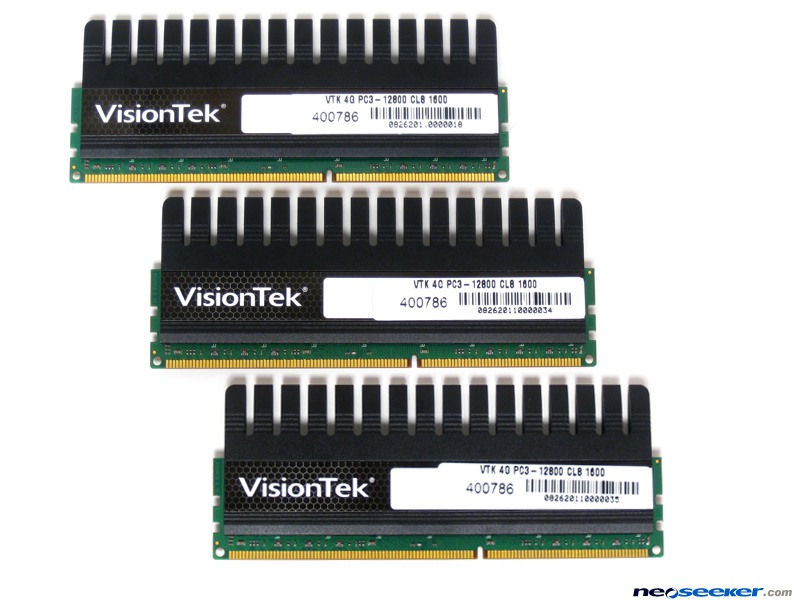 VisionTek wants you to meet the Ultimate RAM series