Check in here for live blogging of the Intel IDF Keynote! Information on Penryn, Nehalem and even the many-core Larrabee project is revealed!

Note: This is being typed during the keynote so you can get the information as soon as it is announced from the IDF show.  There may be some typos and errors in formatting but we’ll get it fixed, thanks!  Join in the forums discussion here to see what others are saying: http://forums.pcper.com/showthread.php?t=445755

The most prominent news from this year’s IDF will be the Penryn core and it is due sooner than we all thought.  Paul Otellini said now that the high end desktop and server products would be launching on November 12 of this year with another 15-20 product SKUs coming in Q1 2008.  In fact, as I type this and you read it, 45nm Penryn processors are moving through the fabs in full production for the launch in just under two months. 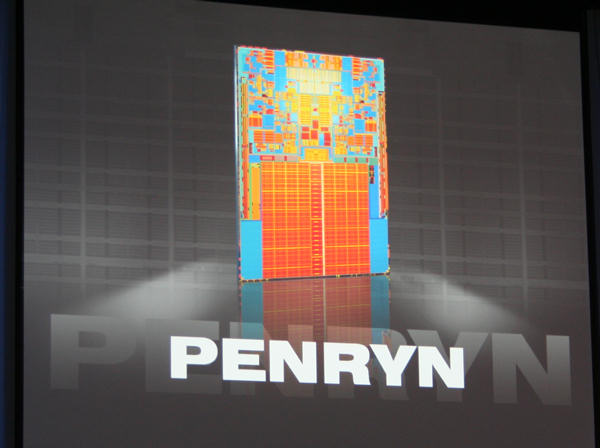 Penryn will be a 410 million transistor die and will only be the first of over 20 unique microprocessors being built on Intel’s new 45nm technology.

While Otellini was discussing the overall view of the upcoming process technology advancements at Intel, some additional information came out about Intel’s plans for graphics. 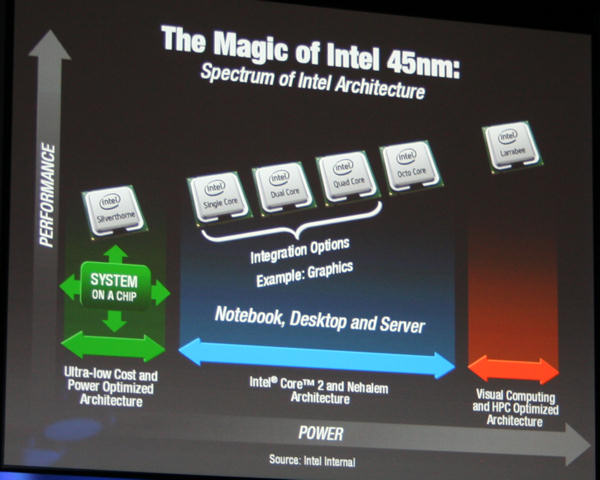 Larrabee on the right, Silverthorne on the left

First, Intel shows a slide that mentioned on-die graphics for the first time on an Intel processor.  With the move to 45nm technology, Intel now has room on the die for additional logic and in much the same way AMD is doing with Fusion, and adding intregrated graphics is now on the table.

Otellini also shows Larrabee on the slide deck as the super high end part and calling it a “many core” product.  More will be given on the Larrabee project later in the keynote – so stay tuned!

Also, Intel showed off the first wafer built on the 32nm technology that will be used in the next iteration of Intel microarchitecture update after Nehalem. 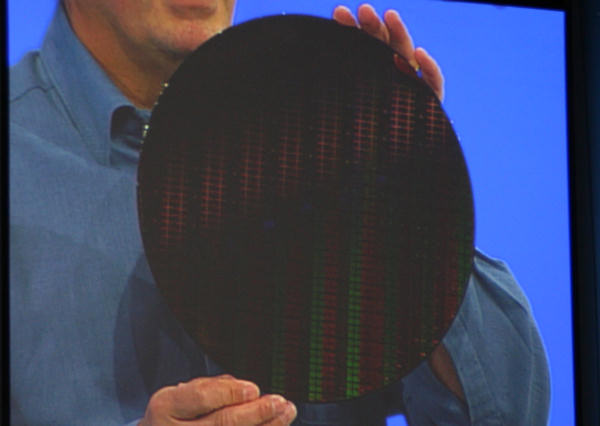 32nm wafer on display – each core you see has 1.9 Billion transistors (yes, with a B)

Nehalem has been confirmed as “hyper-threaded” device and each 8 core processor will support 16 threads simultaneously.  Each die is a total of 731 million transistors (huge!) and was developed nearly exclusively by the Intel team in Oregon. 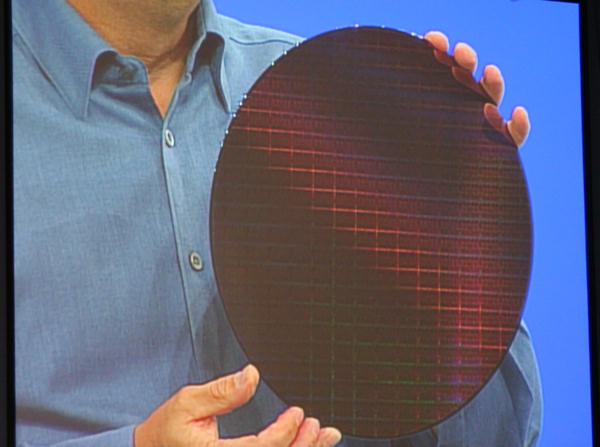 Of course the other big news in Nehalem is the integrated memory controller that will finally put Intel on the same level as AMD in terms of memory latency and high memory bandwidth.  There was no mention as to whether the memory controller would DDR3 or future DDR4, but I imagine that will depend on the state of the memory field at the time.

Nehalem will also include a new technology Intel is calling Quick Path that will allow for a more robust socket to socket communication for multi-CPU systems.  This new CSI will be used to allow Intel’s new Nehalem processors to scale more dramatically in multi-CPU servers.

Next, Intel brought up one of the notorious NDA breakers from XtremeSystems.org to show off their overclocking abilities on the new Yorkfield processor.  Long story short – he was able to break numerous standard benchmark records while on stage and was claiming to have hit 5.6 GHz frequency on the system without voltage modding the motherboard.  Of course, refridgerated systems were used and the CPU was running at 120 degrees below zero.  Go figure.  Benchmarks included 3DMark06 CPU, 3DMark05 CPU, PCMark05, Super Pi 1M, Aquamark 3 and Cinebench 10. 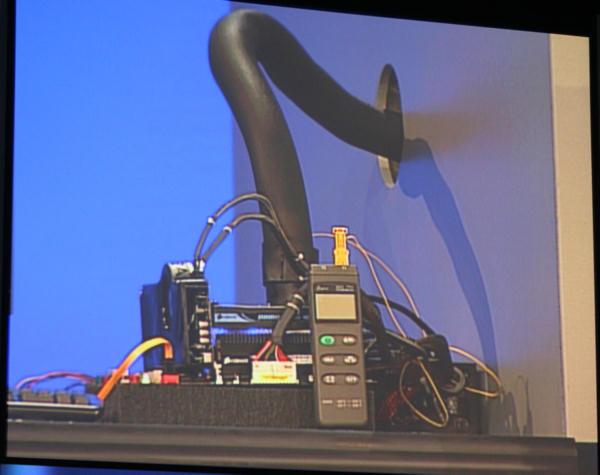 Intel did mention that the new Yorkfield would have an unlocked bus clocking ratio, though I imagine it will be a feature that is only found on the Extreme line of CPUs.  They also mentioned plans for a new software utility that sounds like NVIDIA’s nTune that will allow the users to adjust their system settings typically only found in the BIOS while in Windows.

Otellini showed their plans for the future of integrated graphics that starts with mild performance enhancements and then moving into CPU/GPU combined parts with the 45nm process technology as the building block. 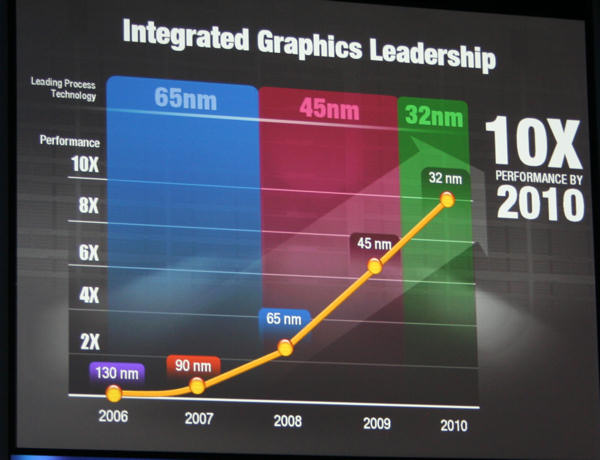 Intel plans to see a much larger jump in performance with their integrated graphics parts year to year than we have seen in the past.  By 2010 Intel wants to have a 10x performance leap over what you have in the current G33 chipset; that’s a good jump but what about the high GPU world?

One of most exciting products from Intel, and also one of the most secretive, is the Larrabee project that many in the industry have theorized will be Intel’s entry in the world of high-end graphics. 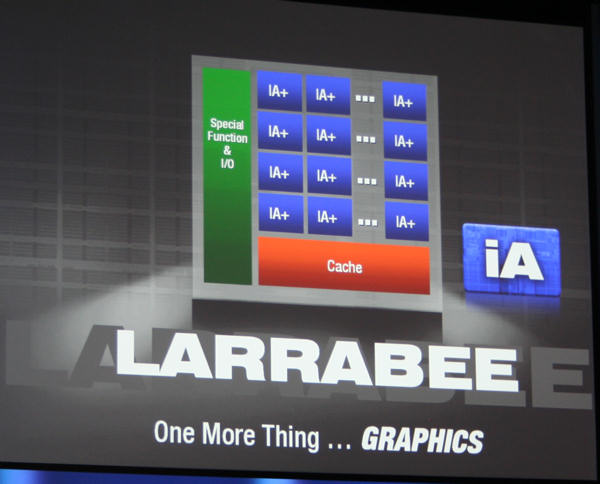 While the presentation is short on details there was some new information for us to bring to you.  The chip architecture is well into development and will be showcased for the first time working in 2008 — though when in 2008 they didn’t say.  My guess would be about this time next year.  Intel plans to make in-roads at the high performance visual computing space by bringing teraflops of raw processing power to the hands of developers.

These developers should also appreciate the architecture that Intel will present by keeping the programming very familiar and including a shared and scaled cache across all the cores on the processor.  This is already a requirement of DX10 specifications but I am guess Intel may be leaving more under the table than they shared here today.  Otellini also predicts that the Larrabee project will find uses in the worlds of super computing, physics and health applications — all areas that AMD and NVIDIA GPUs have been targetting recently.

Finally, Otellini brought out Jeff Yates of Havok, the physics programming company recently acquired by Intel.  He then brought out someone from Pandemic, the developer of Mercenaries 2. 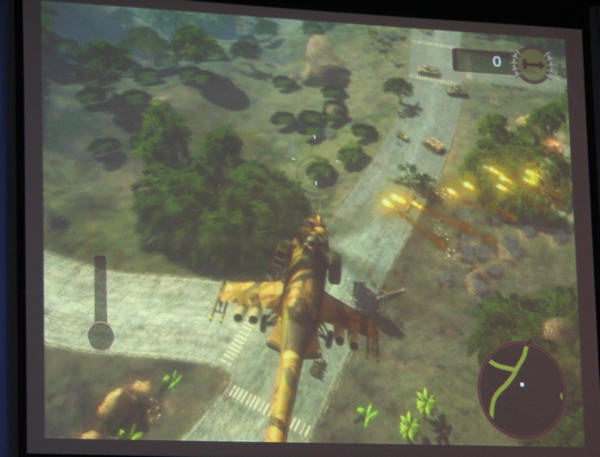 None of this was running on Larrabee at all, but instead of showing the power of Intels upcoming quad-core processors for in-game physics.  Obviously with the purchase of Havok, a company that was once working very closely with NVIDIA, Intel is serious about taking control of the PC gaming market in both the world of CPUs and GPUs.

Sing along with Jen-Hsun 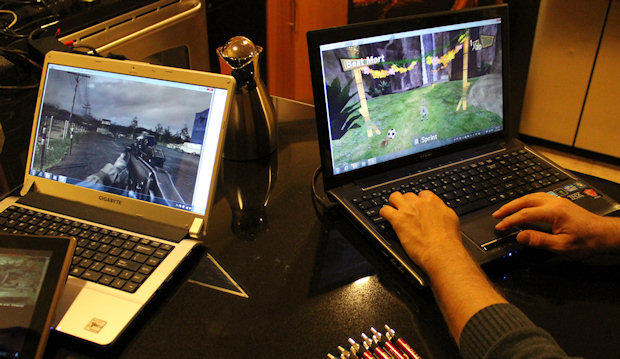