There is no consensus amongst the overclocking community as to what tests, successfully completed, qualify an overclock as “stable.” I’ll highlight my personal testing method which has worked very well for me over the years. First, let’s run down the list of tools you’ll need:

When you visit the MemTest86 site, you’ll find that there are several versions available for download. I would recommend getting the latest MemTest86 ISO image. Once you’ve burned the image to a CD, you can boot up directly to MemTest86 to conduct RAM testing.

With the MemTest86 boot CD in your optical drive, reboot your PC and either manually set your PC to boot from the disc using the bootloader of your PC or set the optical drive to the first boot drive in BIOS.

As soon as the MemTest86 is loaded, it will begin running its battery of stress tests on your system memory. If the RAM settings you have chosen in BIOS are stable, MemTest86 will complete its battery of tests, indicating successful completion by incrementing the count under the “Pass” column, as highlighted below: 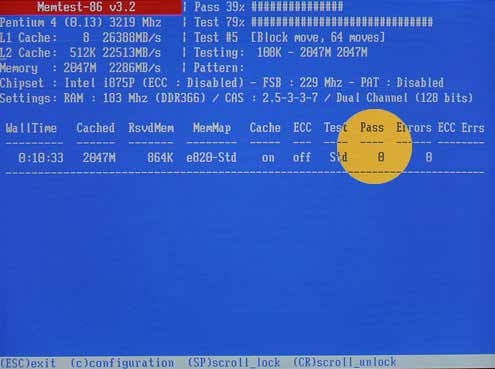 If the RAM settings you have chosen in BIOS are not stable, or you have increased the actual RAM speed beyond the capabilities of your RAM, you will see a list of errors in red, as seen below. Press the “Esc” key to exit MemTest86 and reboot the PC. 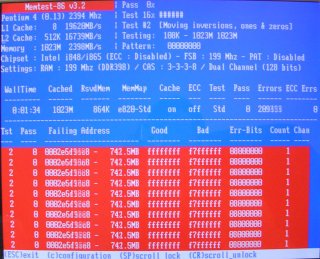 Upon reboot, enter the BIOS and try to “undo” the last changes you have made to the RAM subsystem. If the last settings you applied increased the actual RAM speed, try decreasing the frequency; if you last lowered Tcl, Trp, Trcd or Tras, try increasing them by one cycle or more. You’re just trying to ease up on the RAM subsystem until you return the system to stability.

If you’re finding that the RAM seems to produce errors particularly near the end of testing, an increase in DDR2 Voltage may return the RAM to stability. “Juicing” the RAM is not always the answer however: if the manufacturer has set a limit on the VDIMM (RAM voltage) do not exceed it – you could kill the RAM altogether.

Once you’ve found a group of settings that do not error out immediately, I would suggest allowing MemTest86 to complete two full passes. This could take a couple minutes so this would be a good time to complete some errands around the house or grab a bite to eat.

Once you’ve got your RAM subsystem stable (i.e. completing at least two passes of MemTest86 without errors), remove the CD, press the “Esc” key to exit and reboot the system. We are now done with memory stress testing, so you can boot into Windows to begin CPU stress testing…

I am reminded of one of my early overclocking endeavors: I took an AMD Duron from 600MHz to 900MHz (yes, I was there when dinosaurs roamed the earth). From the time I saved the overclocked settings in BIOS, I waited anxiously to hear the glorious beep of a successful POST.

Not only did I manage to get the PC to POST, I was soon staring at the Windows desktop. Success! I had achieved a 50% overclock without any problem. What the heck were all these guys complaining about on forums? Overclocking was a piece of cake.

Not twenty minutes had passed when, feeling confident about my overclocking prowess, the PC blue screened. I patiently rebooted. Another blue screen, only a little quicker this go round. I rebooted once more, becoming slightly more agitated. Yet another blue screen. I suspected everything in my PC except for the CPU overclock, after all, the darn thing booted into Windows – if that wasn’t an indicator of stability, then what was?

Well, thankfully I’ve learned quite a bit since that time, and in the process, have come to learn that there are better indicators of a stable overclock than being able to load Windows (although NOT being able to boot into Windows is an indication that an overclock is problematic).

Before we get into the stability testing procedure, it is important to introduce two utilities that serve a vital role in monitoring your CPU as you conduct stress testing. The first utility is a temperature monitoring utility, aptly named Core Temp. Go ahead and open up the Core Temp.exe application. You will see a screen similar to the one below: 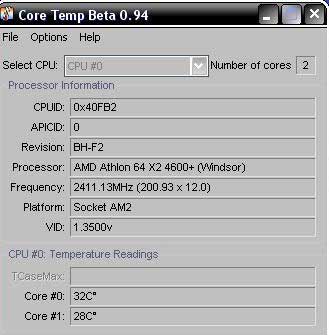 The key figures to note in Core Temp are the reported temperature readings at the bottom of the screen. Again, you’ll want to be sure that they are as low as possible, and ensure that the temperatures reported never exceed the safe operating range indicated by AMD.

The second useful utility is CPU-Z, a diagnostic utility that provides a wealth of information about your CPU including stepping and cache information. Go ahead and open the cpuz.exe application. You should see a screen like this: 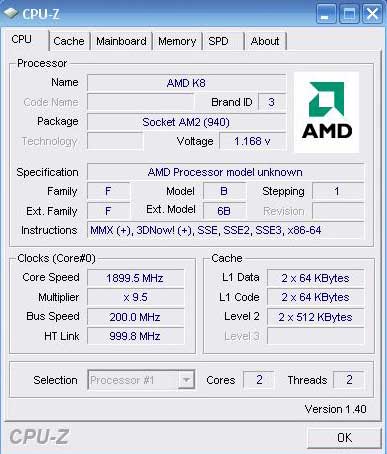 You’ll want to ensure that the Core Speed indicated is exactly as expected (i.e. CPU Frequency x CPU Multiplier in the BIOS). You’ll also want to make sure that your HT Link is operating at the expected speed (i.e. CPU<->NB HT Speed x CPU Frequency). Finally, check to see that the Voltage displayed nearly matches the CPU Voltage you set in BIOS earlier.

With these two utilities open and running, go ahead and open up the stress testing software, Stress Prime 2004 for Dual-Core CPUs (Orthos), you should see a screen as follows: 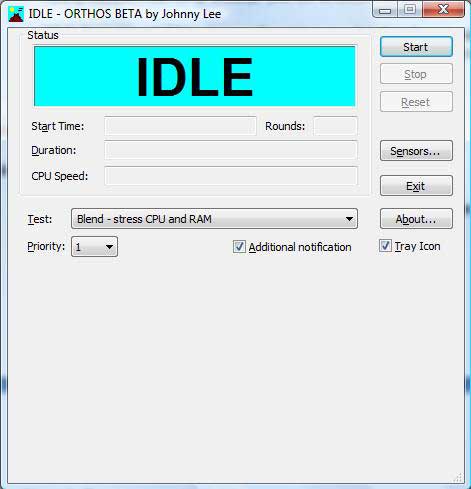 Once you’ve made the “Blend” test selection, go ahead and push the “Start” button leaving all other settings at their defaults. Stress Prime 2004 puts quite a strain on the CPU, and as such, you should note in Core Temp that your temperature readings increase quite fast. Make sure that these readings don’t exceed the maximum operating range specified by AMD.

Again, because Stress Prime 2004 places such a tremendous strain on the CPU, if your overclock is not stable at all, it can immediately cause the test to fail, in which case you will see a screen similar to the following: 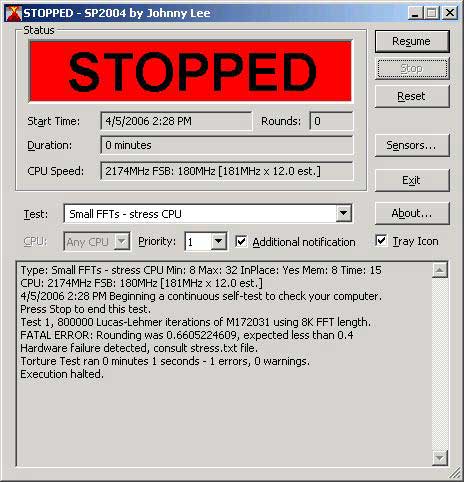 If you are met with this failure immediately, it is likely a sign that you’ve pushed your CPU too far in overclocking. In this case, restart your computer, enter the BIOS once more and significantly ease up your overclock, then repeat the stress testing procedure.

If your overclock is semi-stable, you may be able to complete the first and quite possibly second test without incident. You’re not out in the clear yet, as execution may still halt in the early phases of the stress test. If Stress Prime 2004 reports a “Hardware failure” after completing several tests, this likely means that your overclock is close to stable but slightly too aggressive. In this case, restart your computer, enter the BIOS once more and reduce your overclock slightly, and/or increase your CPU Voltage by the smallest increment available. Once you have made these changes, repeat the stress testing procedure.

Once your overclock is able to make it past the first four tests or so, you may wish to leave your PC unattended. Reason being: to really ensure that your CPU overclock is stable, you should allow Stress Prime 2004 to run uninterrupted for a minimum of twelve consecutive hours. If you can afford to leave it running uninterrupted for twenty-four hours, that would be best, but I rarely find the time to allow for such an extended testing period myself.

Once your system has passed twelve rigorous hours of Stress Prime 2004, it is ready for the next phase of testing, 3DMark06…

3DMark06 is a popular 3D benchmark that really taxes the graphics subsystem of your PC. Still, the test involves a fair amount of CPU involvement and is an effective stress test if for no other reason than testing the entire system.

I don’t go too crazy with 3DMark06, and instead just choose to run the benchmark at all its default settings two times back-to-back. In order to do this, run the benchmark, wait for it to complete (it will take a couple minutes) and report your score. Click “Close” on the results window and then re-run the benchmark.

If your system is able to successfully complete 3DMark06 (the score is not particularly important here in as much as successful completion of the benchmark) two times through, then you are ready for the final stage of stability testing…

So far, we’ve run a gamut of synthetic tests to tax your system. While these tests are an effective way to push your system, the best check for stability is to see if your overclocked CPU can handle the rigors of running the applications you will be using on a day-to-day basis. If you experience lockups or crashes, this may be an indirect plea from your PC to ease up on the overclock.

At the end of the day, you need to deal with the reality of overclocking: sure, an overclocked CPU will earn you accolades from your MySpace Friends, but who cares about accolades when your unstable CPU craps out when as you submit an assignment at its deadline? 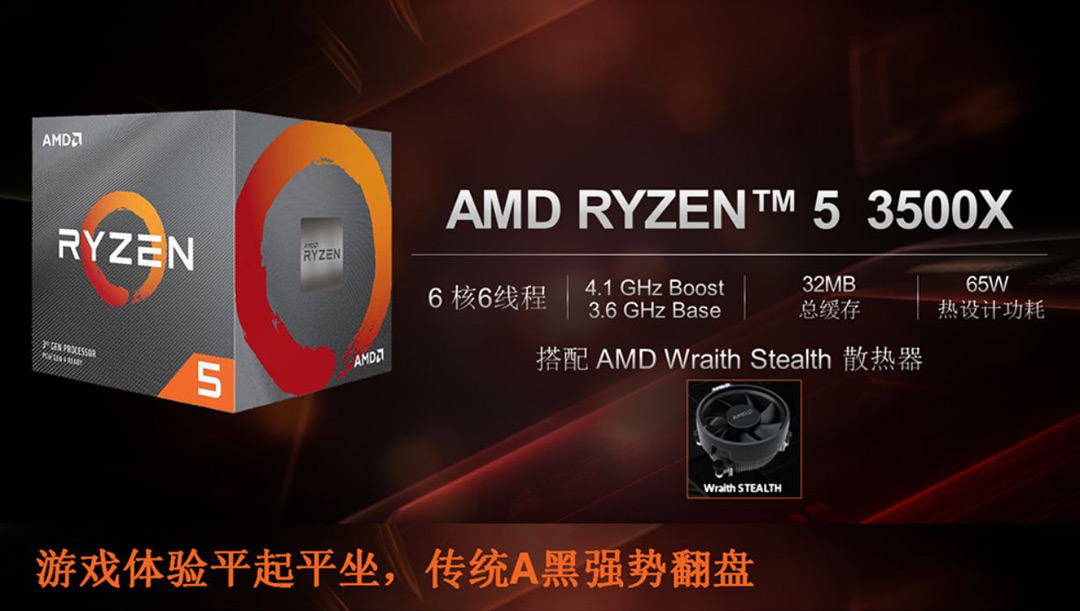