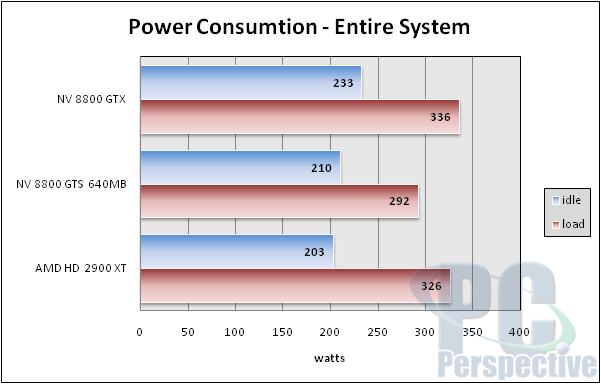 First, you need to understand that the nForce 680i chipset does use more power than the Intel 975X chipset, and thus the NVIDIA graphics cards are going to get a slight handicap because of that fact.  Looking at the single card tests, the idle power consumption of the AMD HD 2900 XT card is the lowest — by 7 watts compared to the 8800 GTS 640MB card.  I think that difference is made up by the chipset power consumption rates but that all comes with the territory of picking your platform.

The load power consumption is a different story though with the 8800 GTX and the HD 2900 XT using quite a bit more power than the 8800 GTS 640MB card.  Based on the performance results we saw in our benchmarks on the preceding pages, it’s easy to see how both the 8800 GTX and GTS offer a significant power/performance ratio advantage while gaming. 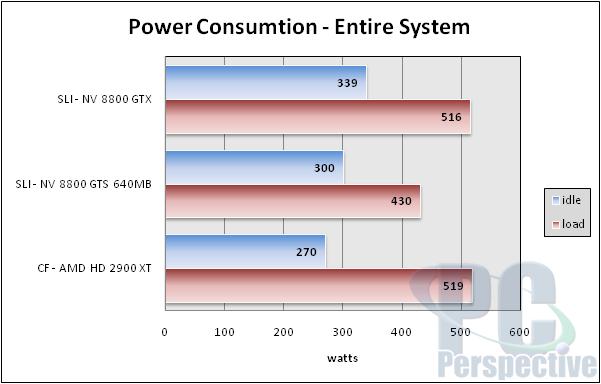 Looking at the power consumption on the SLI and CrossFire configurations we see again that though the HD 2900 XT has the best idle power consumption at just 270 watts, at full load the system chugs along at 519 watts even on the Intel 975X chipset.  The 8800 GTS 640MB has a big advantage over the comparable AMD card and uses 89 watts less power while gaming.

One thing I didn’t do here is provide you with screen shots comparing the NVIDIA-based DX10 gaming to the AMD-based DX10 gaming.  The reason behind it was simple enough: I was never able to find any differences in the rendering of ANY of these games between the NVIDIA and AMD graphics cards.  It would seem that the much more strict guidelines in the DX10 specifications are doing what they were supposed to do and provide a uniform gaming experience across all hardware brands.  At least in terms of individual frame image quality…

Gaming in Windows Vista has definitely been a struggle since the operating systems release in January.  We even ran an early Vista gaming benchmark article (though all DX9 titles) that contained more frustration than anything else and followed it up with detailed driver improvement guarantees from both AMD and NVIDIA.  Both companies promised improvement in their performance and compatibility and they have slowly but surely gotten DX9 performance about on par with Windows XP.

Our DX10 titles show a slightly difference scenario though, one that hasn’t been in the public eye long enough to get the full attention of both parties.  In our single GPU testing, the NVIDIA 8800 GTX was by far the best performer in the DX10 titles that are currently available.  The GeForce 8800 GTS 640MB card, closer to the actual price competitor to AMD’s HD 2900 XT card, was also a strong performer and out matched the AMD card in just about all of our tests.

The AMD HD 2900 XT had some difficult times as a single card; it came in last in our 3-way comparison in all of our tests with the exception of Call of Juarez where it had a slight lead over the 8800 GTS 640MB.  In our initial review of AMD Radeon HD 2900 XT back in May I concluded that the card was mediocre for current DX9 titles but that “real test on these cards will come later this summer and into the fall as the first Direct X 10 titles are finally released.”  Well that time is now, and AMD let us down again.  This could be an issue with the hardware design or clock speeds but it also is definitely an issue with driver development.

If the single graphics card performance of the HD 2900 XT made NVIDIA’s 8800 cards look good, then the SLI versus CrossFire comparison puts NVIDIA on cloud 9.  NVIDIA has done a great job improving the SLI experience on Windows Vista and has been able to produce some impressive scaling numbers.  In Call of Juarez adding a second 8800 GTS 640MB card got us an 86% improved frame rate and in Lost Planet we saw an 81% improvement.  Other titles like World in Conflict and Bioshock had smaller performance advantages in SLI but the fact is that there were improvements across the board. 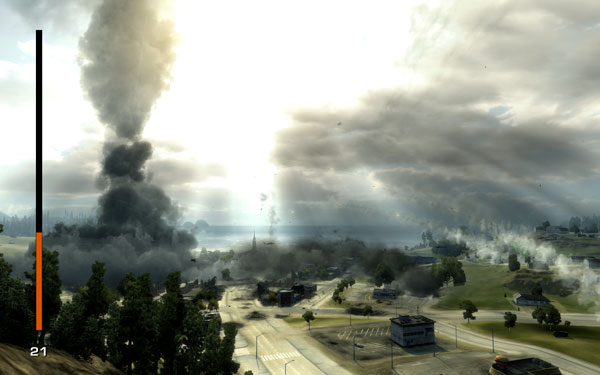 
The same cannot be said about AMD’s CrossFire technology; the only games that saw any kind of positive scaling were Call of Juarez and Lost Planet.  Those two titles actually did pretty well as the second HD 2900 XT card provided a 53% and 43% improvement in average frame rate respectively.  The other three games, Bioshock, Company of Heroes and World in Conflict, actually saw negative performance when adding in the second card for CrossFire mode and user’s that had actually shelled out the cash for a pair of them would no doubt be disappointed with those results.

NVIDIA still has room to improve, and they have admitted as much, but their Vista multi-GPU experience is worlds above what AMD’s is currently providing.  Logic says that AMD should be able to address both single and dual card performance with driver updates but when and by how much is up in the air.

Will AMD’s drivers be able to aid their DX10 performance enough to make up these differences or will the upcoming hardware refresh be required before we some kind of performance normalization with NVIDIA?
Stability

One thing that I was surprised to find on both the AMD and NVIDIA test platforms was a very stable gaming experience with both single and dual GPU configurations.  With the youth of the OS and drivers still in question, I wouldn’t have balked at seeing some crashes or some bluescreens or lockups but instead all I got was a smooth experience with installation and playing the various DX10 titles.

There is something to be said for that — maybe this new Vista driver model is worth a damn after all…?

Availability of the NVIDIA 8800 GTX and 8800 GTS cards isn’t an issue at all these days, and you can find them at some great prices too.  If you are looking for a low cost option, we have seen 8800 GTX cards for as low as $510 on our pricing engine and the 8800 GTS 640MB card for as little as $355.  If you want the factory overclocked models that run at higher than reference clock speeds though, you will have to pay a premium for them.  Overclocked and water cooled, high end 8800 GTX cards can get as high as $700 or a more reasonable $590 and you can get overclocked 8800 GTS 640MB cards from EVGA or BFG for around $410-$440.

The AMD Radeon HD 2900 XT cards are also well stocked across the web and prices for them have dropped as low as $390.  Unfortunately, that is still more than the 8800 GTS 640MB cards can be found for and with the performance wins going to the NVIDIA card more often, that puts the HD 2900 XT in a very tight spot.  If you want to splurge for some reason, you could also get 1GB models of the HD 2900 XT or even slightly overclocked models for under $500.

At the outset of this review I wanted to help you decide which of the high end graphics cards currently available were the best for playing the first wave of DX10 game titles and I think we have easily done that.  The NVIDIA GeForce 8800 GTX is our pick for anyone looking to play the likes of Bioshock, Company of Heroes, Call of Juarez, Lost Planet or World in Conflict in DX10 modes.  The power of the G80 GPU and the time NVIDIA’s driver development team has put into Vista are evident in our benchmark and gaming experience results.

The NVIDIA GeForce 8800 GTS 640MB makes a great second option though for users with a slightly smaller budget.  This card still does very well under Vista with the DX10 games and keeping another $150 in your pocket never hurt anyone.  The let down for me here was the Radeon HD 2900 XT from AMD; the card was only able to get off the bottom post in our results in a single test (Call of Juarez) and the multi-GPU results of CrossFire were abysmal when compared to what NVIDIA’s SLI was able to accomplish.  AMD needs to put some work into the GPU segment if they want to maintain any kind of technological level with NVIDIA’s products, whether that would require software fixes or hardware re-spins.  And there is no time like the present…

With other HUGE titles like Crysis and Unreal Tournament 3 just over the horizon, DX10 gaming is going to rocket-jump this holiday season.  Let the fun begin!

If you have any questions or comments on this article or our testing, please drop into a thread I started in our forums to discuss!