AMD has been in a difficult situation in the graphics market for some time now but their new RV670 graphics core is going to change all that, at least according to AMD. Stop in and see how the new HD 3850 and HD 3870 perform against NVIDIA’s best of breed!

This fall has already turned out to be one of the best times to be a PC gamer as we discovered and discussed in our most recent GPU review, the XFX GeForce 8800 GT.  A new wave of competitively priced and powerful graphics cards is hitting the market and a slew of great PC titles have already started their onslaught onto shelves and into our free time.  If you were wondering when would be a good time to stick the proverbial tongue out at your console-gaming buddies: that would be now.

Of course, as PC gamers know, the stigma of gaming on this platform is the need to upgrade.  Fair enough; but most of us have fun doing it.  With games like Call of Duty 4, Crysis and Unreal Tournament 3 already in your collection (they are, right??) many of you will find your system lacking in the GPU area.  We have already seen NVIDIA’s holiday bargain deal in the 8800 GT released a couple of weeks ago and now AMD is throwing their hat into the ring with a pair of new products previously known as RV670 and now known as the HD 3800 series.

In its most simple form, the new RV670 architecture is a die shrink of the R600 architecture we saw released earlier in the year as the HD 2900, 2600 and 2400 graphics cards.  The changes in the GPU go further than that of course, as we saw with NVIDIA’s G92 revision of their G80 architecture, and we’ll dive into those alterations below.  If you want more information on the R600 architecture that is the core of the RV670 refresh, then you should check out my previous review of the HD 2900 XT that will tell you all about the stream processors, texture units and ROPs that power these cards.

The most important change for this new mainstream graphics card is the move from a slightly problematic 80nm process technology to a new 55nm process that is proving to be the savior of the R600 design. 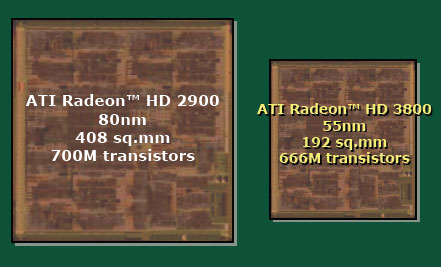 This single slide could really be titled something along the lines of “TSMC saves Radeon” and I wouldn’t balk at the thought.  The move from 80nm to 55nm technology is saving AMD where it really matters today – in the pocket book and on the power meter.  Coming in at less than half the total die size and using 34 million fewer transistors the RV670 cores are going to be much more cost efficient for AMD to have made at TSMC.  Just to clarify, none of these are actually being made by AMD’s fabs. 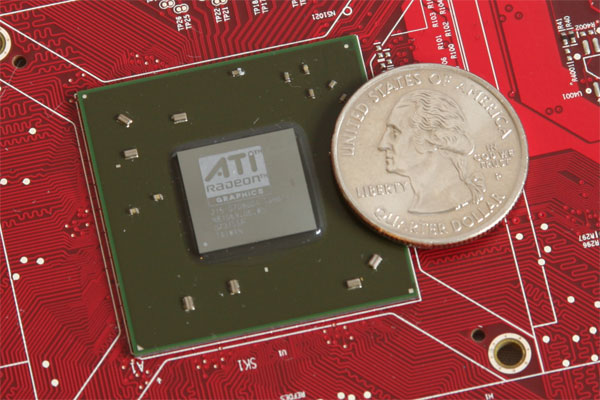 Where this move also helps AMD’s GPU department dramatically is in the power savings department.  Remember that the AMD Radeon HD 2900 XT was a power guzzler, sucking down more juice than the top end NVIDIA graphics boards while performing considerably slower; it required a completely new PCIe power connector as well!  The new GPU is much more green-friendly and as we’ll see in our performance and power consumption numbers later on, the new HD 3850 and 3870 cards can get about the same performance as the HD 2900 cards using only half of the peak power. 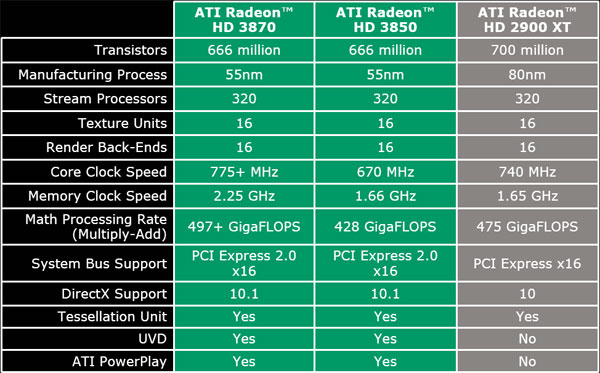 This table shows the differences between the RV670 GPU and the R600 HD 2900 XT graphics cards.  We noted the move from 80nm process to 55nm process above, but we didn’t mention that the underlying graphics architecture is the same.  AMD still has provided the 320 stream processors along with the 16 texture units and 16 ROPs.  The clocks speeds vary, with the 3850 running slower than the HD 2900 XT while the 3870 runs a little bit faster and the resulting GFLOPs from each GPU reflects that as well.  320 SPs at 777 MHz (where our HD 3870 was clocked) with a pair of MADD operations per clock results in 497.28 GFLOPs of raw processing power.

There has been a reduction in the memory bus width – going from the 512-bit interface that the HD 2900 XT had to a new 256-bit bus.  This change helps cut down on the die size and transistor count making the RV670 a better financial bet for AMD.  Not only that but you’ll find that the reduction hasn’t affected performance at all.  The memory clock is running quite a bit faster on the HD 3870, at 2.25 GHz of GDDR4 memory.  This is a noticeable jump over the 1.65 GHz of GDDR3 that the HD 3850 and the HD 2900 XT cards and should give the 3870 an advantage in places where large texture swaps are frequent.  The 3870 will come with 512MB while the 3850 will come in both 512MB and the more common 256MB versions.

An architectural shift for AMD in this refresh of the HD 2000 series architecture is a move to DirectX 10.1.  AMD will be the first company with at DX10.1 compliant graphics card, though the benefits of this move are hotly debated by both AMD and NVIDIA, no to mention developers and Microsoft’s DirectX team as well.  We’ve heard from separate people at Microsoft that DX10.1 is a minor change and also that DX10.1 is an evolutionary necessity for the DirectX architecture.  I bet you can’t guess which MS rep was at which vendor’s presentations, can you? 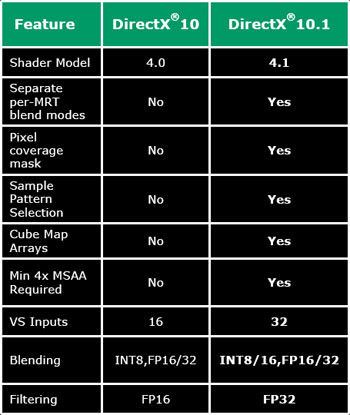 In reality, it would appear that DirectX 10.1 is a compression on the freedom that hardware and software developers have in their DX10 implementations.  Basically, there will be less and less ability for both sides being able to skirt by the specifications.  The table above, provided by AMD, gives us some insight into what changes in the new 10.1 revision though most of this is a repeat from what we posted several days ago in our RV670 leaked documents editorial.

Gamers will be happy to see some of the changes including the requirement that game developers include the ability for at least 4x antialiasing and developers will be happy to see that sample pattern selection is a requirement for hardware vendors.  This will give the devs the ability to customize their MSAA sampling patterns if they find their own image quality improvements to be better or more efficient than what AMD or NVIDIA implement in their technology.  Other improvements include the ability to use global illumination for easier dynamic lighting as well as a move to 32-bit floating point filtering.

The inclusion of DX10.1 probably shouldn’t be a key selling point for you in comparison to NVIDIA’s current competition though the added technology support might do well to put your mind at ease for this current upgrade.

Another important addition to the RV670 architecture is AMD’s UVD, or unified video decoder, that was included in some of the R600 parts but not the high end HD 2900 XT cards.  Similar to what NVIDIA pulled with their inclusion of the much better VP2 processor in their 8600 series of cards but not the 8800 series (originally at least), AMD left the full UVD technology out of the HD 2900 XT to save on die space and probably heat as well.  The move to the RV670 architecture addresses this and includes it in both of the HD 3800 cards.

The UVD technology is used to offload the entirety of decoding high definition video from the CPU to the GPU where it can be addressed much more efficiently.  This frees up your CPU for doing other tasks like background work without causing your frame rates to drop during video playback.  Though both sides claim that theirs is the best, at this point I am calling the AMD UVD and NVIDIA VP2 technologies a tie in this area.