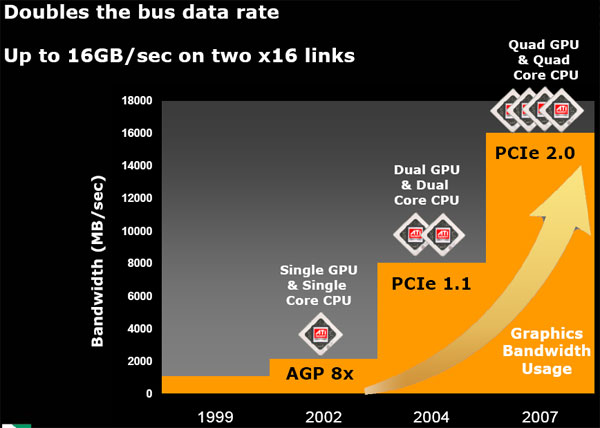 The RV670 is also the first AMD GPU to implement support for PCI Express 2.0 technology, the next evolutionary step in interconnectivity.  Total bandwidth increases to 16 GB/s compared to the 8 GB/s that current PCIe 1.0 would support though the benefits of this move are pretty slim in single or even dual card graphics implementations.  AMD claims that the move to 4-way CrossFire will actually be able to take advantage of this large amount of bandwidth and even that games like Call of Juarez see significant performance boosts in 2-way CrossFire because of the move to PCIe 2.0.  We will be doing some testing of our soon to see how that works out. 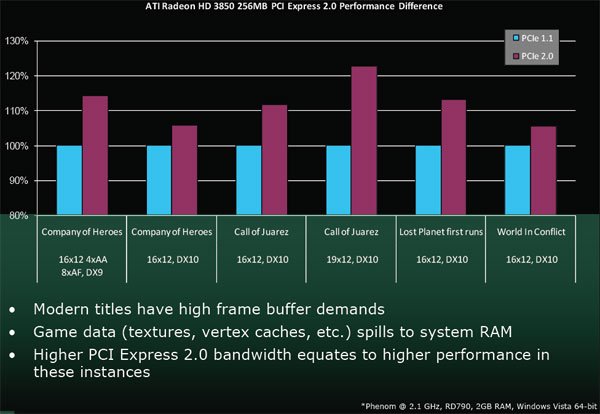 It is important to note, just for those that don’t keep up with all of our content here, that the HD 3800 PCIe 2.0 cards that we are reviewing today are still compatible with existing PCIe 1.0 motherboards – no need to upgrade that part if you don’t want to. 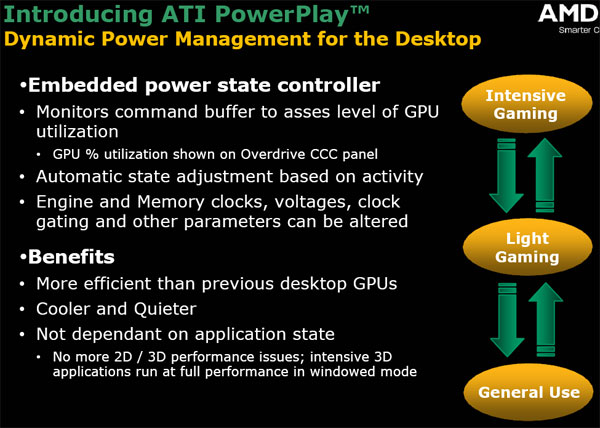 The final major architecture shift that we found on the RV670 core is the inclusion of a new AMD PowerPlay functionality that is at least a first to my knowledge; I haven’t heard of anything similar on NVIDIA’s cards thus far.  Basically, the new RV670 core is self monitoring in terms of GPU utilization and can dynamically clock itself down to one of three levels depending on current usage.  The first “step” is the most basic level where the clocks are set relatively low and would primarily be used for 2D applications.  The second and third “steps” increase the clock rates and performance levels with that third and final spot being the all out 3D performance mode you’d expect.

AMD claims that this functionality will rid their cards of the various problems associated with 2D and 3D clocks including being able to run windowed games and benchmarks without affecting GPU performance at all.  This change will also allow for some better power consumption numbers while at idle and users will be able to see their estimated GPU utilization in the control panel windows. While the usefulness for the average gamer here is questionable, for some this could be a handy feature.

As I alluded to above, CrossFire is going to be seeing a significant pair of upgrades timed with the release of the HD 3850 and HD 3870 graphics cards. One we have already mentioned and that has been floating around the rumor sites for months is for CrossFire X – this will allow three-card and four-card CF configurations in addition to the dual-card modes we are used to now. 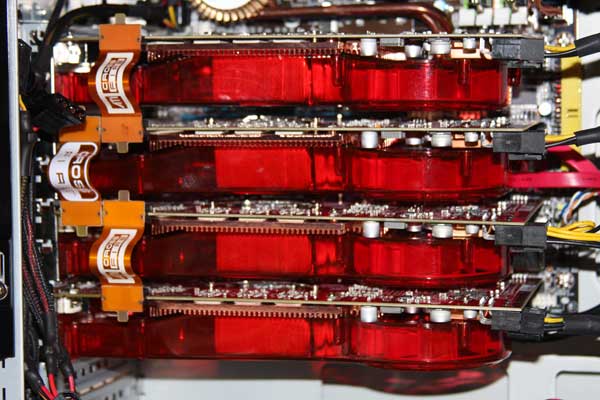 The issue here will be scaling and if adding a third or fourth card into the mix will actually improve your gaming performance enough to warrant the extra cost.  AMD seems more active in promoting their Quad CrossFire to us right now than NVIDA is their 3-way SLI so it would seem AMD might have a leg up in terms of software implementation.  But in truth, this is something we won’t have any way to know until we actually get our hands on the hardware from both vendors.

An even more impressive step forward for me in the world of multi-GPU graphics is the ability to use more than one monitor.  No seriously, I’m excited about this.  And it’s sad.  After years of SLI and CrossFire from both NVIDIA and AMD, it looks like AMD is going to be the first to allow you to run multi-GPU accelerated graphics while maintaining your multi-monitor configurations!  AMD is marketing this both as a way for multi-monitor gaming and as single-monitor gaming with standard windows on the other screens – both of which are exceptional in my book.

On the next pages we’ll get to the meat of the article including a look at the new AMD ATI Radeon HD 3870 and 3850 graphics cards.