Obviously with all the attention on the new 55nm process technology of the HD 3800 series of GPUs we need to spend some time looking at how these cards perform when it comes to power draw on your system. 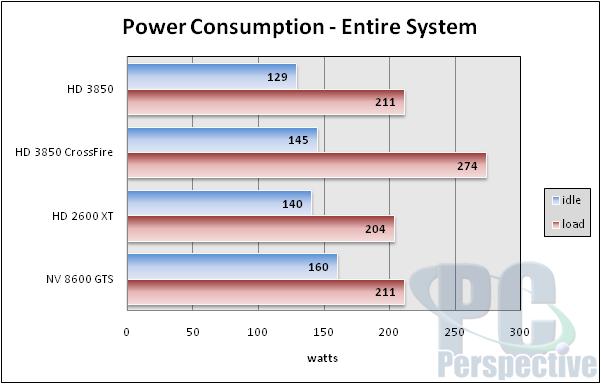 Starting with a look at the HD 3850 comparison, the new GPU is definitely the best performance-per-watt leader on the market at the coveted $170-ish price point.  It actually uses less power at idle than both the HD 2600 XT and 8600 GTS while using the same power under load as the 8600 GTS and only 7 watts more than the HD 2600 XT.  Considering that the performance of the HD 3850 was nearly double that of the previous generation cards in some cases, even when compared to a card of its own architecture just a few months removed, the HD 3850 is a hand down winner. 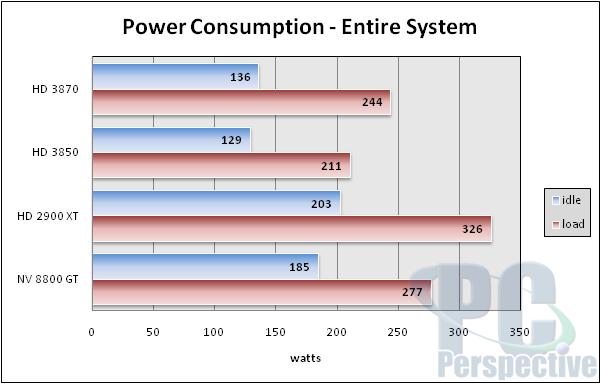 The results with the HD 3870 appear to be just as impressive with an idle power usage that is nearly 50 watts less than the NVIDIA 8800 GT system.  I specify the “system” here because while the AMD cards were tested on an Intel 975X motherboard the NVIDIA cards were on an nForce 680i motherboard and the 680i chipset is known to use a bit more power than Intel’s own.

The other revelation comes when we look at the load power consumption numbers where the new HD 3870 draws 33 watts less than the NVIDIA 8800 GT card does.  But where the new RV670 GPU shines is compared to the HD 2900 XT where it is able to out perform the original R600 while using 82 watts less power!  The performance delta between the RV670 and G92 make that power margin a little less impressive, but the generation to generation gap on the AMD parts is impressive.