Can NVIDIA Revolutionize your PC?

NVIDIA is attempting to introduce a new standard for communications between your system and devices like your power supply, water cooler and even your chassis! What for you may ask? The Enthusiast System Architecture looks to help you get the most from your system.

You have a problem — you probably didn’t really know it, but you do.  You want to monitor the health and status of all your PC components with ease but you can’t and are instead forced to use countless other less-than-reliable programs from motherboard vendors, chipset vendors, third-parties and sometimes from system vendors.  But even those can’t give you the WHOLE picture, right?  What about your power supply?  Your case?

This is how NVIDIA pictures the system monitoring environment as it exists now.  You can check certain aspects of these items while in your favorite OS (we’ll call it Windows) like memory voltages, frequencies or GPU temperatures or even CPU speeds.  You depend on readings like this to test and monitor your tweaking and overclocking attempts.  This can be a pretty time consuming process, if you can do it reliably at all, by keeping all these applications open and forming them into a workable environment.

Wouldn’t it be nice to consolidate all these things and maybe even add in the ability to monitor things like your chassis air flow or even the current on your power supply rails?

Don’t worry, says NVIDIA, there is a solution and it is known as ESA: Enthusiast System Architecture.  (see logo as article icon)

Using ESA, NVIDIA hopes to see things like cooling devices for liquid systems, power supplies and even chassis themselves have the ability to report pertinent information and maybe even modify settings in a way to make the enthusiasts life easier.  The slide above gives some examples on what the ESA could possibly provide including examples of water temperature, fan speeds, light controls and even PSU voltage monitoring. 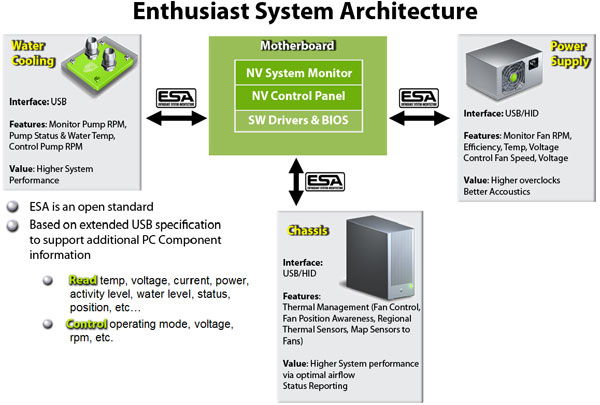 Besides showing similar examples to above, this slide shows you some more technical details on what exactly we are talking about here.  First, ESA data, transmitted between the device with ESA support and the motherboard, would run over a standard USB connection.  This means that ESA devices can either connect directly to a USB slot or to a 5-pin connection that is custom made for ESA applications.  ESA chassis could also come with an integrated, internal USB hub that would allow a user to attach all their ESA-ready devices to it and then run a single cable from the hub to the motherboard for easy software control.

The second interesting point about ESA on this slide is that it is an open standard.  This means that NVIDIA is not going to charge any licensing fees or logo fees to use the ESA technology and would thus not be shutting out other motherboard chipset vendors for adopting these “standards”.  NVIDIA has gone so far as to submit the specification to the USB organization to be an official superset of the USB standard.

It is important to note a couple of things about ESA and what it actually is.  ESA specifications do NOT decide what data an ESA device provides to the software applications that will monitor it.  Nope, instead ESA is simply a communications standard on how data is sent down the USB connection and how to read it.  The slide above demonstrates that and a possible implementation method on a power supply with an integrated microcontroller for converting analog signals to digital signals to be transmitted.  The box on the right shows how the data is organized into collection zones and reports with device class information as a container for it all. 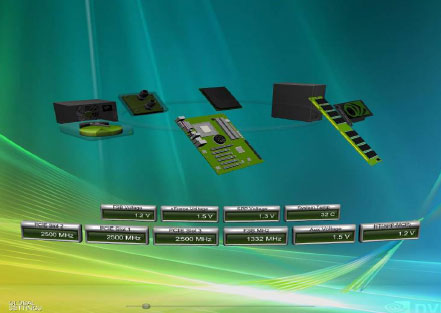 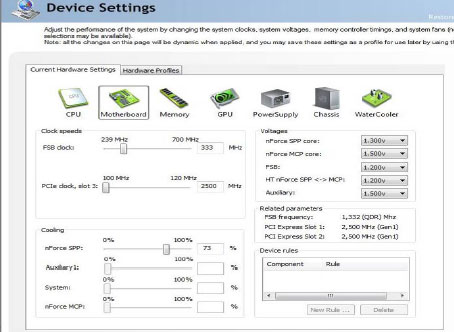 These two shots are from upcoming NVIDIA software that they will release with their 7-series chipsets to take advantage of the ESA standards.  You might consider this a combination of the current nTune software and extra section to read ESA information coming from all of the components.  There are all kinds of customizations that are possible with NVIDIA’s implementation but what is even better is that ANYONE can write a program to communicate with the ESA standards.  I would expect several enthusiast communities to find their way towards ESA development and we’ll have apps much like ATITool.


It really is a pretty simple idea that is ingenious because no one has attempted something similar before.  Even amateur programmers should be able to work with the ESA standard to write software for it.

As I stated above, the ESA standard doesn’t really specify what data is sent over to the ESA monitoring software from any ESA-compliant devices, so the implementation of useful and accurate information is really dependent on the product vendor.  NVIDIA had several examples on display at their Editor’s Day though we aren’t allowed to talk about them because of some disclosure scheduling rules or something.  But let’s brain storm and see what we can come up with… 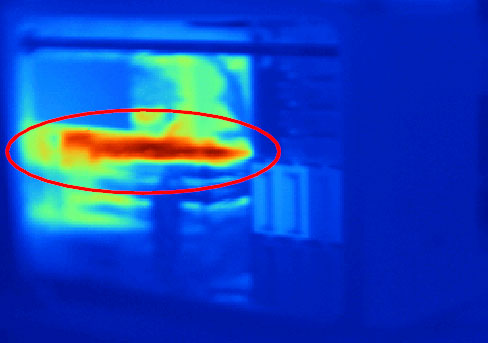 This simulated screen shot, provided by NVIDIA, shows what a chassis vendor could create with an ESA compatible product.  Imagine a case that has thermal probes all over the interior that feed data back to the motherboard and ESA software in real time.  The software could then use these temperature readings to create a diagram like the one above showing “hot spots” in the system.  Look pretty damn cool to me and you should easily see how helpful this information could be to an enthusiast.  While this is great theory, we have no information on any cases implementing anything like this yet…

Other ESA implementation ideas are easily derived from the previous slides including lots of data on power supplies.  Wouldn’t it be nice to get reliable voltage, wattage and amperage numbers per rail on your PSU while using it?  This could definitely help users improve the stability of their system and find problem areas before they cause major catastrophe.  PSU makers could take it a step further and allow the ESA software to adjust the fan speeds or even the voltages of the power supply lines depending on the PC’s current status.

The possibilities of the ESA standard are interesting for sure: water cooling status and control, changing chassis lighting on the fly and much more can be implemented if the standard catches on.

What’s more is that NVIDIA wants to have this standard continue on past this implementation into a more robust architecture into 2008 and 2009.

Imagine a scripting language that uses the bi-directional ESA standard to control all your fans and components easily and thus improving your experiences in performance and reliability.  Another step NVIDIA has listed is a pre-OS implementation of ESA on the motherboard itself that will allow ESA controls to start working before Windows starts allowing manufacturers to really build “smart” PCs that adjust, monitor and report their issues and problems before they cause major concern.

According to this slide and NVIDIA, the response for the ESA standard is pretty convincing.

While I really have hope for the ESA technology, at this point I have to take the entire idea with a grain of salt.  The few component vendors that I spoke with (that didn’t want to be quoted) said they were less than excited to add the extra costs of ESA technology into their hardware for fear that it will be wasted when users ignore it or OTHER component vendors don’t implement.  Basically, nobody wants to be the only want left holding the bag if the standard flops horribly.

NVIDIA has a very long road ahead of themselves trying to get the ESA standard adopted on a large enough number of components to make the platform idea viable to consumers.  After talking with NVIDIA’s employees on the topic, as well as power supply, cooler and chassis vendors, I do believe that there is a lot of potential for what ESA could become and I certainly hope that we will start getting components in-house with ESA implementations that impress.  However, I know how well other standards created by individual companies that aren’t Intel (like say…EPP, nTune) fare in the enthusiast market and don’t have a 100% positive outlook on this one.

Once we start getting hardware and software implementations of ESA we’ll be able to get a better idea how viable the Enthusiast System Architecture can be. 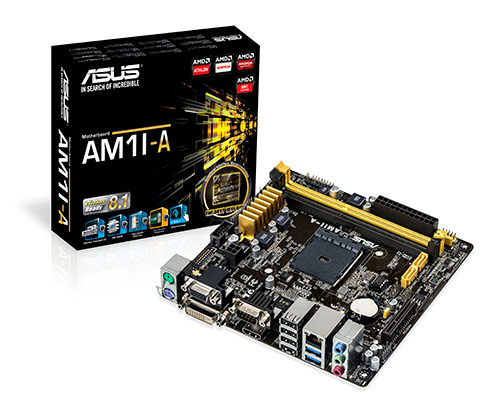