The Thermalright IFX-14 was tested on a red-hot Pentium 4 EE based test rig consisting of the components listed below.  The ambient room air temperature was maintained at 23?C +/-0.5?C.  Four instances of CPUBurn were executed at the same time (two to load both physical cores, and two to load the two virtual HyperThreading cores), which resulted in 100% CPU usage.  Tests were conducted with two different 120mm fans at four different speeds to see how the cooler performed with varying degrees of airflow.  A small bench power supply was used to control the speed of the Panaflo L1A fan: 12V hi speed, 9V medium speed, and 5V low speed. 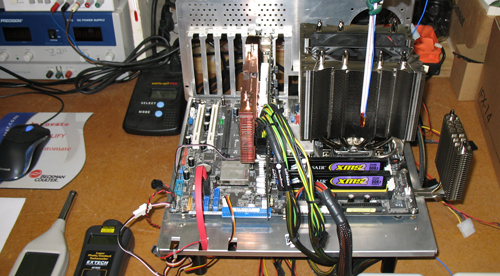 As expected, the Thermalright IFX-14 CPU cooler did an outstanding job of keeping the fully loaded CPU cool.  It turned in the best numbers of any air cooler we have tested to date.  When used with a single 120mm Panaflo L1A fan running at reduced voltage, the IFX-14 is virtually silent, but the cooling performance is still excellent.  The large surface area provided by the two main heatsinks allows this cooler to perform extremely well with reduced airflow.

When fitted with the big high-speed Delta air turbine, the IFX-14 performed only slightly better than the SI-128 SE down-draft cooler from Thermalright (possibly due to the added backside cooler?).  Actually this isn’t too surprising as the base and heat pipes of the two coolers are essentially the same.  Only the fin surface area is much larger on the IFX-14 primary cooler.  With the big Delta fan pumping out over 100 CFM of air, the difference in surface area between the two coolers has little affect.  The overall heat transport mechanism appears to be maxed out with a full load CPU temperature only 9° to 10°C over ambient.

Because the IFX-14 provides for several different fan mounting locations there are numerous options available for many different fan configurations; one, two, or three fans in push and/or pull.  Each user will have to decide for themselves what the best combination of fans is for their application; silent cooling performance or maximum overclock? 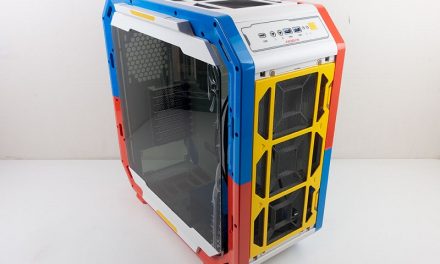 The In Win Explorer And Airforce, New Flat Pack Enclosures