So you’ve seen what new game play aspects the use of PhysX technology can give you, but what does it do for your performance?

For our testing I used the following system:
You’ll also see three sets of benchmark results for our testing, which was done on the Tornado map.  The blue lines labeled “Non-PhysX Map” show performance on a regular CTF map without added PhysX effects.  The red lines show results from a PhysX map, but without having a PhysX PPU installed and the green lines show performance of the PhysX map with a PhysX PPU in the system. 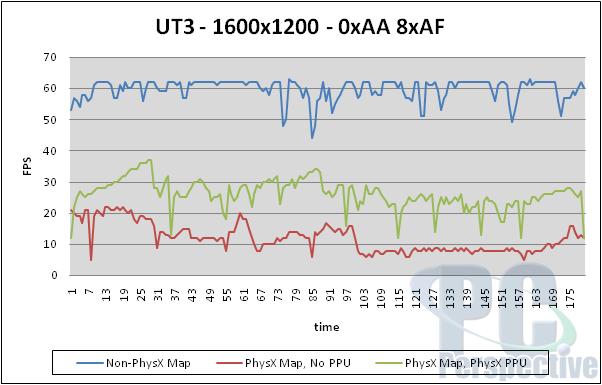 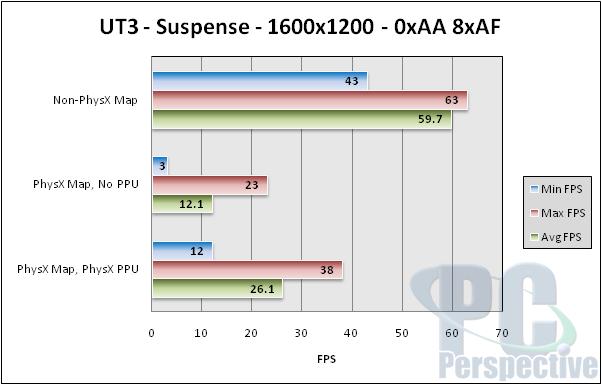 The results here are very interesting — the non-PhysX map performs more than twice as fast as the PhysX enabled map with the PhysX card.  The Tornado map was still playable at those frame rates with the PPU, but taking the card out of the system slowed it down tremendously.  With an average FPS of 12.1, playing on these maps without a PhysX card is just out of the question.  Even with a PhysX card though, the performance was lower than we’d have hoped.

After contacting AGEIA about it, they said that putting in a quad-core CPU would help things out quite a bit.  This got to wondering about the CPU utilization in our own system.


You can see that on a standard map without using the PhysX mod pack the CPU is just about pegged but there areas where you can see the utilization is less than 100%.  Looking at CPU utilization without a PhysX card on the PhysX maps shows both cores locked in at 100% and even with the PPU installed the CPUs are only slightly eased up on.

Obviously from these results, if the PhysX engine is multi-threaded along with the UE3 engine, then adding a quad core CPU would have a positive result on performance.  But not all gamers that might be considering an AGEIA card have quad-cores and thus this performance hit is a bit of a letdown.

In timing with the release of the UT3 mod pack as well as the Warmonger game release, AGEIA has worked with their partners and resellers to start selling PhysX cards for as low as $99 after mail-in rebate.  The BFG PhysX PPU is going for $144.99 with a $45 rebate at Newegg.com getting you to that magical <$100 price point.  Considering the initial price of these cards was $250, this new price level should be a BIG plus for AGEIA as they fight for what’s left of the PC physics market after Havok’s purchase by Intel.

The UT3 PhysX mod pack is a big win for AGEIA and their hopes of getting PhysX hardware in as many PCs as possible.  The two levels that AGEIA released aren’t the most amazing things we have ever seen out of the mod community and the performance hit our test system took even with the PhysX card installed definitely raised an eyebrow.  Overall though, the additions to real-world game play were interesting enough to warrant a call to arms for creative level designers.  The idea of releasing a tool kit that will allow gamers to easily create their own content that utilizes the technology is also a brilliant idea and will hopefully get some of the more diligent AGEIA fans off their butts making some even more inventive and original content based on UT3.

AGEIA is still a long way from convincing the masses that they need a discrete physics card, but lower prices and higher-quality content are the steps required for its adoption.

If you have any questions, comments or want to see what others are saying about this review, head into our forum to discuss!!!

Be sure to use our pricing engine to find the best prices on the AGEIA PhysX products and games: