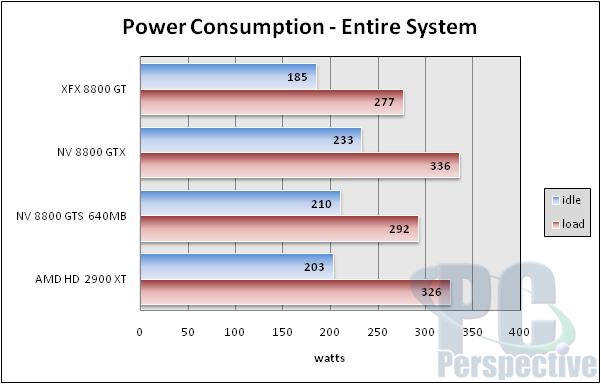 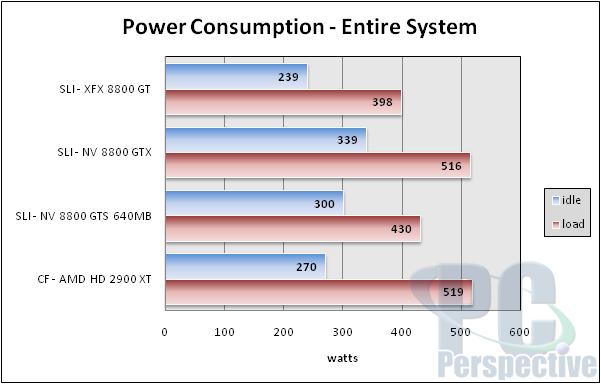 The multi-GPU power consumption is equally impressive on both sides as the 8800 GT uses less power at both idle and load compared to the 8800 GTS 640MB card — its most direct competitor.

Along with the power consumption we usually find the heat and noise to be related.  The card did get hot, as ALL modern graphics cards do these days, but the luckily the cooler that NVIDIA designed for the 8800 GT is able to cool it while remaining pretty quiet.  During initial boot up, and usually before you get the correct drivers installed, the fan on the card does get quite loud but I never actually heard it get that fast during testing or hours of game play.  Obviously the fan has the POTENTIAL to be obnoxious but in the entirety of our review it didn’t happen.

The new NVIDIA GeForce 8800 GT is one of the most impressive graphics card launches in years.  Even though this isn’t a new flagship card that beats all other GPUs on the market as we saw with the 8800 GTX or Ultra cards, the fact that we are getting incredible performance for a cost that is lower than where many other competing cards were at just a few weeks ago brings the 8800 GT into exclusive company.  NVIDIA’s CEO actually was quoted as saying that G92 could be the best chip they have made since the GeForce 4 TI 4200 — and I am sure many of you have fond memories of that card.

By “incredible performance” I am of course referring to the many benchmarks I showed you on the previous pages.  In all of the games that I tested, including Bioshock, Company of Heroes, Lost Planet, World in Conflict and even the UT3 demo, the XFX 8800 GT card was able to perform as well as or better than NVIDIA’s own 8800 GTS 640MB card.  The GTS was previous one of the better price/performance contestants in the world of desktop GPUs because the 8600 series lagged so far behind.  The new 8800 GT GPU bridges that gap by bringing performance on the same level as the GTS cards while keeping the prices, and even power consumption, lower. 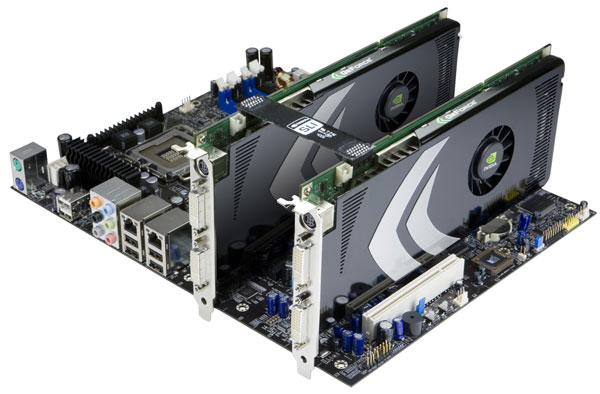 Simply put the 8800 GT is the card I’d recommend to anyone looking to play PC games, period.

Despite how impressed I was by the results of the single 8800 GT card, when I paired them up for SLI testing the results weren’t nearly as tantalizing.  While it doesn’t have anything to do with the G92 architecture at all, the fact is that multi-GPU configurations are an order of magnitude harder for NVIDIA to optimize for and because of that performance gains fluctuate from 0% to 80% on a game to game basis.

In this round of testing, some games saw very poor scaling including Bioshock, Call of Juarez and World in Conflict.  I was having problems with the UT3 demo as well.  Most of these are driver issues and COULD be fixed as NVIDIA issue newer revisions down the line.  But users are expecting to get the performance they pay for 100% of the time and that just isn’t going to happen with any multi-GPU solution right now — be it SLI or CrossFire.

If you remember when we first reviewed 8800 GTS cards last December they were priced at around $430.  Prices eventually settled in the $350 range for the card as the months went on but have remained pretty constant if only because there was no real competition for NVIDIA or their partners.  In the last several weeks we saw inventories of the 320MB versions of the 8800 GTS dry up and 640MB inventory also seems to be doing the same now.  Obviously, these moves are made to help prevent too much overlap in the NVIDIA line up when this 8800 GT was released.

You’ll be happy to know that today, you can find several 8800 GT 512MB cards for sale today for prices as low as $260.  Unfortunately this is still higher than the expected MSRP of $199 that NVIDIA bragged about during our discussions with them and even higher than the $249 that NVIDIA said would be the MSRP for vendor-overclocked cards.  Even at that higher price the 8800 GT is a GREAT option for gamers, but I’d be lying if I didn’t say that you should wait 10-14 days for stock to increase and prices to drop before making the plunge.

It should be pretty obvious by this point that I really like the NVIDIA GeForce 8800 GT.  It’s hard to find ANY fault in a graphics card that cuts $150 off the price of another GPU that it performs as well as.  And it uses less power.  And it only takes up a single slot.  And it’s not a paper launch.

The only caveat to NVIDIA or XFX’s 8800 GT card is that their competition is making noise as well.  They have made little effort to quiet the rumors about the upcoming RV670 revision of their R600 architecture.  It is indeed a great time to be a PC gamer.

Please join us in the PCPer graphics card forum to discuss the NVIDIA GeForce 8800 GT!