AMD let a few members of the press get some hands on time with upcoming technology that will allow entry-level gamers combine the power of an IGP chipset with a low-cost discrete graphics board. Will this new hybrid CrossFire turn into something great?

The idea of hybrid multi-GPU technology has been discussed with me by both ATI (now AMD) and NVIDIA over the past years and was actually one of the “imagine if” features discussed with SLI was first reintroduced back in 2004.  Using the integrated graphics that might come your desktop or notebook PC to improve your gaming performance with another discrete graphics makes sense in a lot of ways: you aren’t “throwing away” the purchase cost of the IGP and you are improving your gaming experience without adding power consumption or cost to your system.

In theory at least having two different GPUs talk to each other shouldn’t be too difficult.  AMD’s Radeon series of graphics cards actually did this in the X1000 series, though with some specific rules to keep variable in check.  The problem comes with balancing the work load between two GPUs that are potentially of very different speeds and not forcing one GPU to continually wait.  AMD seems to have found a good solution to these issues and will be rolling out hybrid CrossFire early next year.

AMD demonstrated this new technology to me yesterday and the configuration used all unreleased hardware.  The motherboard was an RS780 chipset that AMD has made no secret of that features an R600-based DX10 IGP core with the north bridge.  AMD estimates that the new graphics core in the RS780 is about four times faster than that in the AMD690G chipset.  Interestingly, we learned that AMD will offer the option to board makers to include on-board memory in sizes of 16MB up to 128MB in the form of single chip to use for local IGP frame buffer.  Any additional memory will use the UMA architecture that utilizes your main system memory for graphics memory.  The on-board option should definitely help reduce memory access times though, so we hope to see it integrated across the board.

The motherboard sported a 2.2 GHz AMD Phenom processor and 2GB of DDR2 memory and was running on Vista, but not in 64-bit mode. 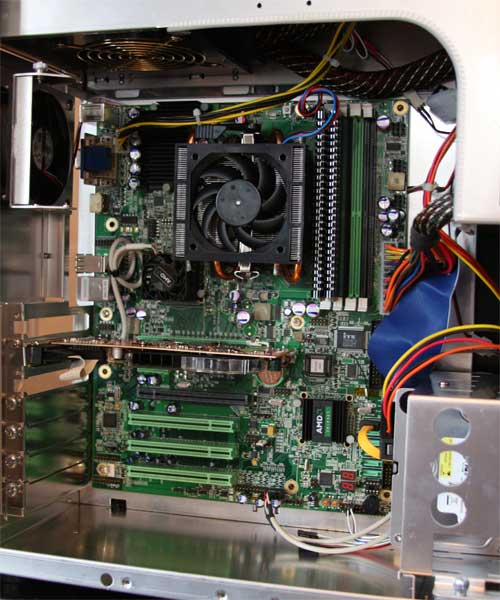 For this new Hybrid CrossFire to work you need a discrete graphics card as well and AMD was using an upcoming RV620-based card called the HD Radeon 3450 that features 256MB of on-board memory.  The expected price point of this is card is about $50 – definitely less than enthusiast grade parts but something that IGP-users would be willing to pay for a valuable upgrade.

Interestingly, in this case, the discrete and integrated GPUs are very similar in design – both use the same number of stream processors and are DX10 parts.  This is the first time I can recall having feature-equal parts in both IGP and discrete parts from either AMD or NVIDIA.

For hybrid CrossFire to work reliably there are definitely going to be only certain combinations of GPUs and IGPs that will work together.  Since the RS780 chipset will come in a few flavors with different amounts of GPU performance and the RV610-620 will be offered in various configurations as well.  Hybrid CrossFire performance is limited to LOWEST performing card times two, if we could get 100% efficient scaling.  So buying a discrete card that is more than 1.8x faster than your integrated graphics card would be overkill and a waste of money.  That is up to the system vendor and AMD to work out which combos will work best and to make sure the unknowing, non-enthusiast buyers don’t make the wrong choice.

Here’s what AMD expects a typical hybrid CrossFire sale and system would be like.  You are a non-enthusiast PC gamer and are buying a new PC from Vendor.com.  When it comes time to pick your graphics setup, it tells you about hybrid CrossFire and that it will make your system a much better player in the world of 3D graphics and gaming in general.  Oh, and since the upgrade is only $50, a lot more people would be picking it than you would initially think.

The best part of this for a non-enthusiast end-user is that the CrossFire implementation is seamless – they don’t need to worry about enabling or disabling CrossFire when they want to play games versus using a multi-monitor setup.  So the PC market gets a new gamer which helps us all – more gamers means more developers, games, driver fixes, etc.

To demonstrate the performance of hybrid CrossFire, AMD let us play Call of Duty 4 and Unreal Tournament 3 on the system without the technology enabled and with it enabled.  The differences were fairly apparent and produced a surprisingly good result that casual gamers would probably find acceptable.

In CoD4, playing at 1024×768 and with somewhat decent quality levels set in the menus, we saw the frame rate of the IGP-only configuration over around 30-35 FPS on average.  When we enabled the hybrid CrossFire mode that took the power of the RV620 chip and utilized it, the frame rate was jumping into the 55 FPS area.  That is a pretty good scaling percentage, though of course our testing results are very scientific this early in the game.

For UT3, we saw a similar change in performance when playing a non-CTF level, or something that was less CPU-limited and indoors.

To be clear, these are going to be quality levels that the majority or our readers demand for the gaming rigs but I would fully expect some of you to build secondary machines using technology like this to have a second gaming system for your friends or family.  LAN parties could be setup pretty inexpensively using setups such as this one.

There are some other potentially exciting product developments to go along with the hybrid CrossFire technology we saw this week.  First, as we first talked about during the HD 3850 and 3870 review, AMD is going to be tweaking the CrossFire driver to allow you to run in CrossFire mode while using more than one monitor.  FINALLY!  This will be a requirement for any big OEM to accept hybrid GPU technology on their builds so we get the benefits as well.

AMD also talked about the future ability to feed the power of a discrete GPU directly to an IGP and pass it through to a monitor.  What’s the benefit of this?  Say you have a high end HD 3870 graphics card installed in your RS780 motherboard.  Now these two GPUs can’t really work together in hybrid CrossFire mode because the HD 3870 is so much faster than the RV620-based GPU in the IGP.  However, if you have your monitor plugged into the DVI output on the motherboard rather than the HD 3870, the HD 3870 could render your games and feed that through the PCI Express bus, to the north bridge and out to the monitor through the IGP output.  The benefit that gives you is that the HD 3870 can then be completely powered down to its lower power consuming state when you are not gaming.  This would give the user a more power efficient system without sacrificing GPU performance.

AMD is the first out the gate with a demonstration of their new hybrid CrossFire technology though I know that NVIDIA is also working on a similar offering.  No doubt trying to impress their investors at today’s analyst meeting in New York, AMD is presenting plans for their immediate future and wanted to demonstrate something that could make them some money.  If major OEMs like Dell and HP see this as a beneficial upgrade to their systems then AMD could make this a success.  So while enthusiasts won’t be satisfied with the performance of hybrid CrossFire anytime soon for their main gaming PC, maybe it can find a home in a secondary or family computer.  We’ll be eagerly awaiting more information on this and a chance to test it in more detail soon.