Josh wasn’t the only one spending his holiday break with some AMD Phenom processors — I spent a few days trying to overclock my new Phenom 9600 Black Edition processor as well.  I saw “trying” because that’s what it did to my patience…

Let me start by pointing you to Kyle’s quick overclocking write up at HardOCP — he was able to reach 3.0 GHz with his 9600 BE by pushing the CPU voltage up to 1.50v and running it on some pretty basic Koolance water cooling.

I then read the report that Josh submitted to me, that you read on the previous pages, and saw his identical processor refuse to overclock higher than 2.5 GHz.  A 500 MHz different, 25% of the processors speed, is a pretty big gap so I set out to see if my Koolance water cooling setup would provide me with enough cooling to get something closer to what Kyle saw in his results.

It was not to be.  If anything, my overclocking results are WORSE than what Josh described.

For my test bed I am using the MSI K9A2 Platinum motherboard with the latest BIOS provided by AMD and the Overdrive Utility version 2.0.12 as provided by AMD for use in Vista x64.  When running at the stock clock speeds of 2.3 GHz, the Phenom 9600 was completely stable and seemed to be relatively cool under the collar. 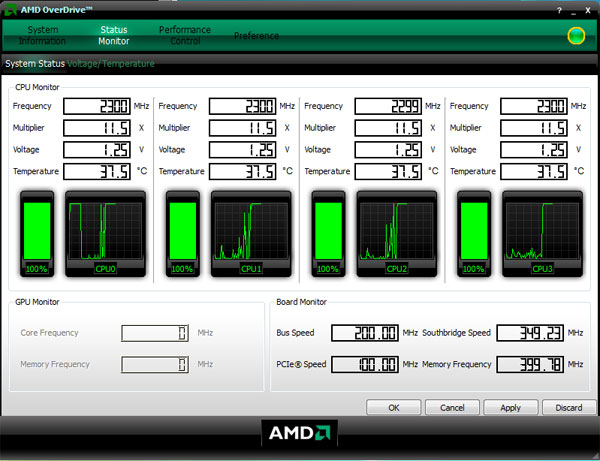 At only 39C or so when under a full load for an hour, the Agena core is running without a drastic heat issue and that would lend itself well to good overclocking potential.  Well, since others were able to hit 2.9 GHz and 3.0 GHz, let’s just jump up to 2.6 GHz to get started… 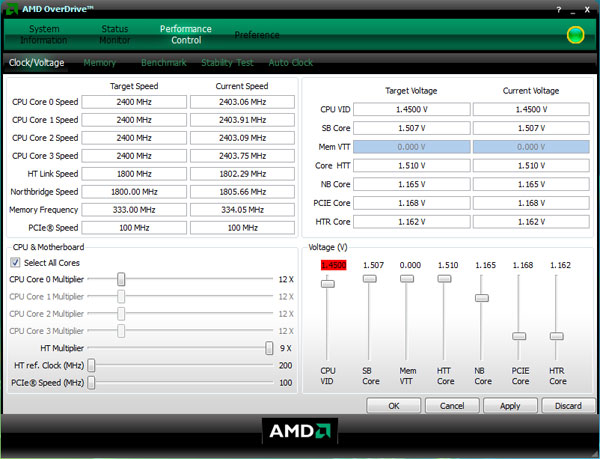 
But 100 MHz overclock isn’t all that impressive, so after several more hours of the above scenario, I decided to switch motherboards.  AMD recommended the new Gigabyte MA790FX-DS5 to me so I used that and the latest F3B BIOS to try overclocking this Phenom 9600 Black Edition again.

My next several hours seemed like a rerun of a bad TV sitcom with my fiance wandering in trying to figure out why I was cursing at the Lord the day before his birthday.

I don’t want anyone to think that I simply tried using the AOD utility a couple times and gave up either: I tried upping the voltages higher, upping the HTT voltages and DIMM voltages, I tried pushing the HTT up but couldn’t get it to boot past 210 MHz, I tried applying both voltage changes and frequency changes at the same time and at different times, I even tried setting all these options in the BIOS directly rather than in the AOD software and instead of blue screens I got black screens as the OS refused to load.

Now look, I’ve never claimed to be an overclocking genius, and you won’t see me on stage with Intel’s CEO showing off my OC results ever, but I’m no n00b here.  I’ve been overclocking for 8+ years and know a thing or two about and I would fully expect to be able to push my hardware to its limits.  After going through two motherboards and three BIOS revisions, I am pretty sure the I found the upper peaks to this particular Phenom.

There are some other questions we have for AMD and the performance of their Phenom parts that will be addressed in the near future such as:  what is ganged versus unganged memory and what are the advantages of each?  Why is the TLB fix in the AOD software a friggin’ button that isn’t labeled??  Why is the HyperTransport 3.0 bus so limited in its scaling?

Josh’s conclusion sums things up pretty well but I will add that there is apparently a large swing in terms of overclockable parts out there.  As I already told you, HardOCP was able to get 3.0 GHz out of their 9600 Black Edition, but most of the other overclocking results I have seen are on engineering sample CPUs.  I think it will be quite some time before we can fully grasp how well these unlocked processors are going to fare in enthusiast’s hands.

(We now return to the previous author…) Conclusion

There is a reason why AMD was unable to release a Phenom above 2.3 GHz at this launch, and it simply is because they do not appear to be getting the speed bins in the power envelopes they were hoping for.  2.3 GHz is the highest speed Phenom that will be available for some time yet, and the average overclock of one of these processors will likely mimic my findings.  2.5 GHz is about the best that can be expected with standard type cooling.

It is very nice that AMD is giving enthusiasts the ability to clock up these processors with the unlocked multipliers.  Especially considering that HyperTransport overclocking on the Phenom is essentially a bust at this time.  If a user is hoping to overclock, then getting a BBE 9600 is really the only option. 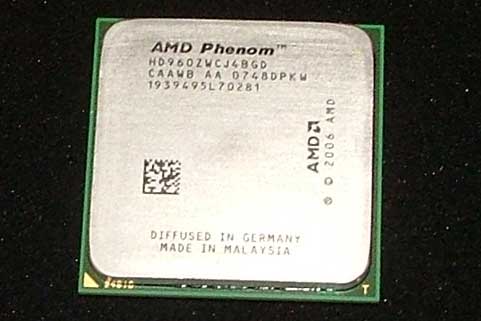 
Performance at 2.8 GHz with my engineering sample is very good and is faster than the Q6600 from Intel.  In single and double threaded performance it is probably a little faster than the older X2 6000+, but when more than two threads are used then the Phenom really excels.  The 9600 at 2.5 GHz is also quite competitive with the Q6600.  Considering that the 9600 in both flavors is now cheaper than the Q6600, it does make it a viable option for those interested in the price/performance bottom line.

Overclocking for the Phenom is still in its infancy, but AMD has helped us out by offering this unlocked processor, as well as a very solid overclocking utility with OverDrive.  Most of the major motherboard manufacturers have released BIOSes for their boards that include the TLB fix.  The latest version of AMD OverDrive does allow the user to disable the fix for greater performance.

Getting an extra 200 MHz out of the BBE Phenom 9600 is not a tremendous feat, but it does offer the user extra performance for very little extra work.  Things will get better as AMD sorts out their 65 nm process and the upcoming revision B3 of the Phenom.  Until then, the Phenom 9600 is an interesting and well performing part for its price.