Even though we all know it’s what’s on the inside that counts, we can help but gawk over the outside of these gaming machines as well and that is where we’ll start with the Digital Storm Twister Extreme. 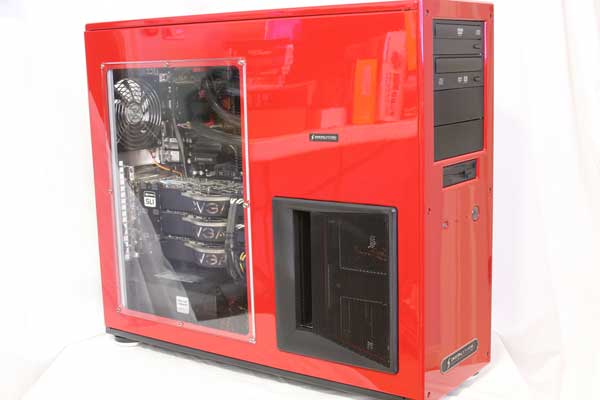 The first thing you notice about this VERY red case is that it doesn’t have a typical computer case finish to it.  Somewhat similar to what you find on an automobile paint finish, the Twister Extreme case has a glaze over the red coloring is very attractive and shiny — notice all the components yet to be reviewed on the table facing the system!  This makes it very hard to take pictures of, but very easy on the eyes.

The case window gives us a peak of the beast inside including the three 8800 Ultra GPUs and water cooled processor while the black vents on both side panels allow for cool air access to the components inside. 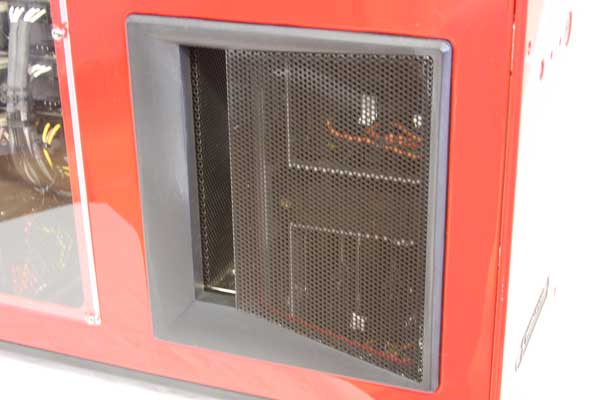 These grates cover the hard drive trays and permit cooler air to reach the fast turning 10,000 RPM Raptor drives and the smaller duct behind them is for more air coming inside the main case bay. 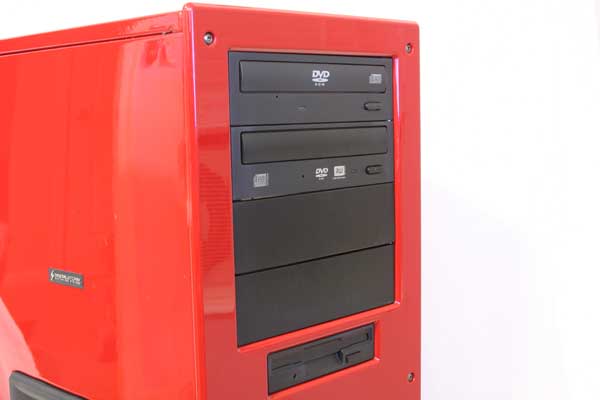 Obviously they weren’t going to use beige colored or white optical or floppy drives in a system that has been painted this bright a color and the black components aren’t anything special but definitely add to the appeal.  They could have painted the front of these drives to match the case coloring and it would have looked MUCH nicer but if you upgraded your drives or added another component it would have broken up the look anyway. 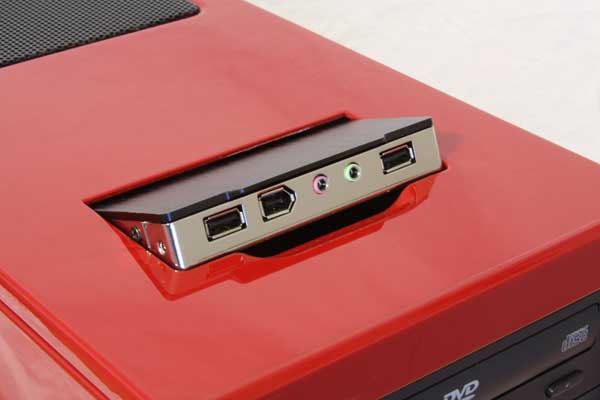 On the top of the case is a flip-up section that reveals a set of connections including two USB ports, a single Firewire connection and headphone and microphone connections.  These are definitely very handy for any type of system user whether they be a gamer or just casual user and the ability to fold it back down into the chassis makes it more visual appealing. 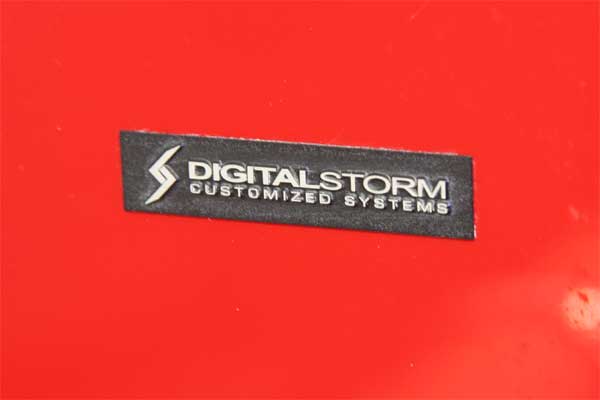 Unlike some other PC builders, the Digital Storm branding on this system is very minimal and that is well appreciated.  Just like I don’t want “Joe Schmoe Car Dealer” on my new wheels I don’t want a big logo plastered on my new high-end PC build.  The logo seen here is small and classy enough to fit in with the rest of the system styling. 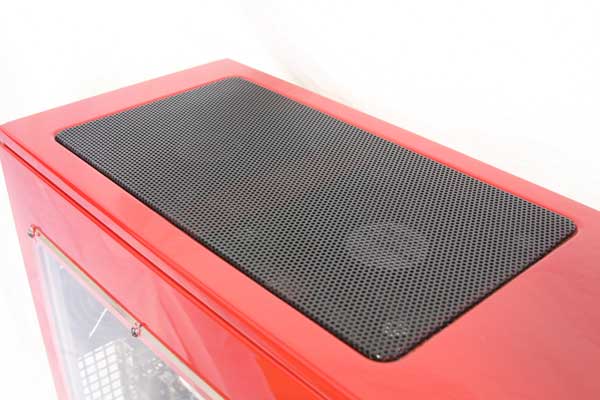 On top of the case there are two large 120mm fans from Zalman that pull all the air up out of the system as well as cool the radiators used in the water cooling configuration for the CPU.  These large fans can move a lot of air without a lot of noise, and that’s a big positive for enthusiasts trying to avoid going deaf. 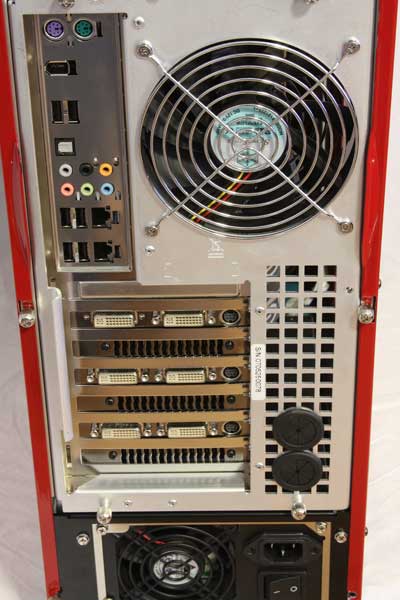 The rear of the case shows us the power supply is mounted at the bottom of the chassis which we prefer for thermal reasons.  The two black circles over the power supply are rubber gaskets for same insertion of water cooling tubes should you decide to add an external water cooling kit but they are not used in the configuration by default. 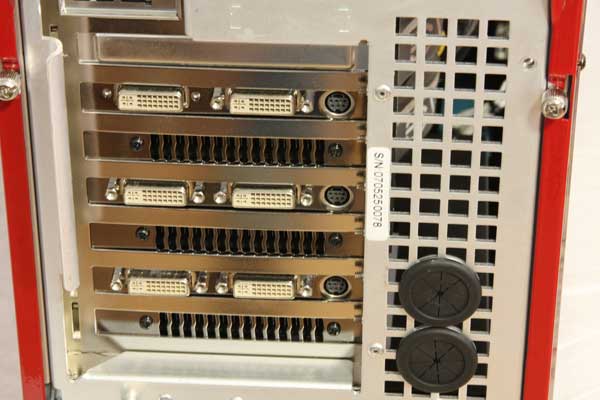 The expansion bays seem somewhat…repetitive.  With three 8800 Ultra graphics boards, each of which uses two slots for their large coolers, the back of this case is essentially full. 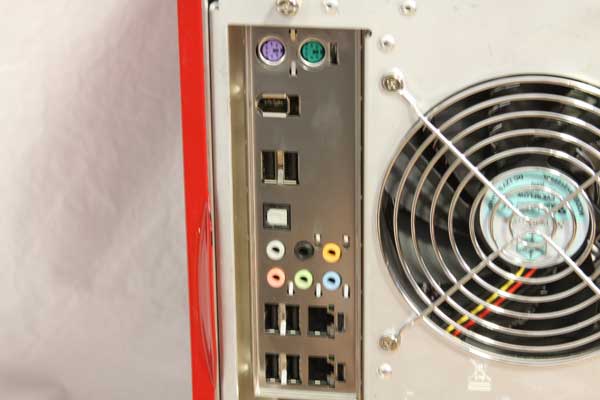 Finally we see the external connections on the rear of the case — pretty standard from what we know of EVGA’s 680i SLI motherboard.  There are two legacy PS2 connections, six more USB 2.0 connections, another Firewire connection, dual Gigabit networking connections and 8-channel audio support either with analog connections or the optical output above it. 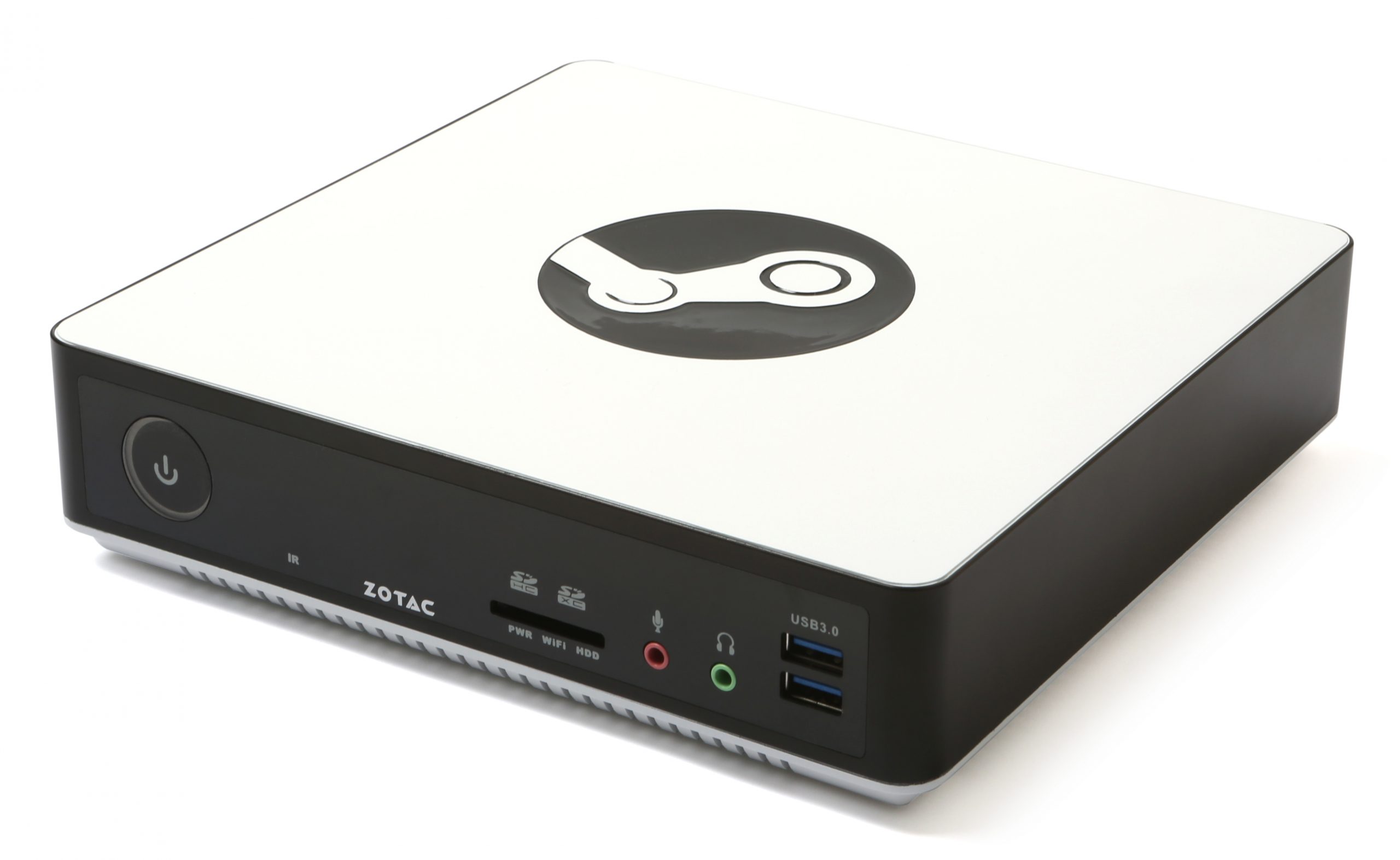 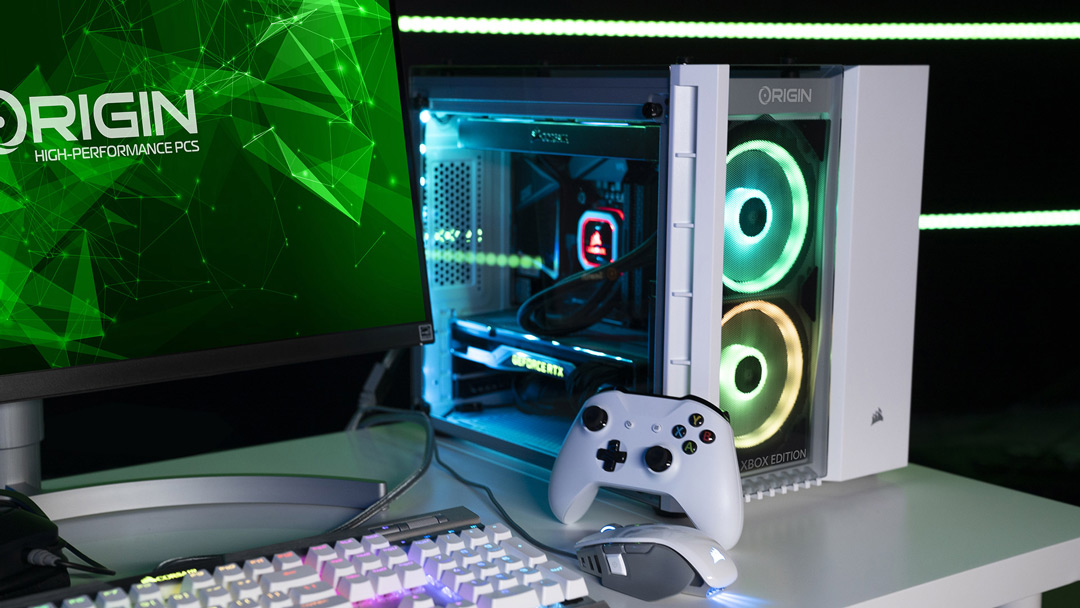 CES 2020: The Origin BIG O Returns With Choice of Liquid-Cooled PS4 or Xbox One