We saw some impressive power results from the 8800 GT but does the new GTS live up to the same potential? 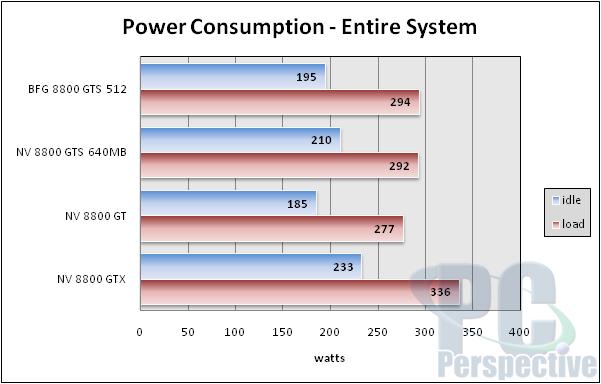 Well, kind of.  The idle power consumption on the new G92-based 8800 GTS 512 is good, coming in just 10 watts higher than the 8800 GT and 15 watts lower than the original G80-based 8800 GTS card.  The power consumption under a full load is about even-steven on the two GTS cards but both are less than we see from the GTX.  But considering that in a few cases the new 8800 GTS 512 was out performing the 8800 GTX cards, the difference in load power usage between those two GPUs shows how well the G92 design can function under the right conditions.

Let’s see…take an already impressive chip with the 8800 GT, add some more stream processors and up the clocks a bit…and it’s no wonder that the new 8800 GTS 512MB card is a great performer.  The 8800 GT cards definitely hit a sweet spot in the balance of price and performance (if you can find them that is) and the 8800 GTS based on that same G92 architecture is also a winner, just a slightly higher price point.

Obviously where the 8800 GTS 512MB has the most success is in areas where its 128 stream processors can work their magic.  Numbering as many as the 8800 GTX and 8800 Ultra cards, but clocked higher, the SPs on the 8800 GTS give it the potential to perform better than the higher priced 8800 cards but only in such a perfect storm.  The slightly lower fill-rate performance and the smaller memory bus (and of course just MORE memory) give the GTX and Ultra cards a bit more room than they would otherwise have though I would again have to claim that NVIDIA is screwing up their product stack.  The 8800 GT surely put a spin on things when the G80-based 8800 GTS cards were around though now that they are gone, the new 8800 GTS 512MB more properly fits into the positioning NVIDIA N-visioned. 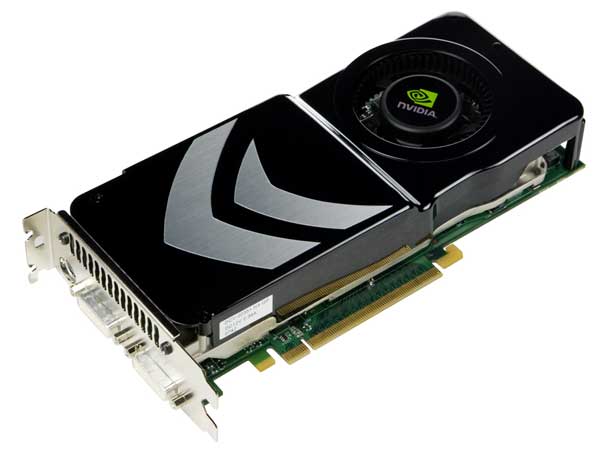 Overall though, in our various game tests, the 8800 GTS 512MB was a screamer and was actually able to outperform the 8800 GTX in a couple of instances and remain close in a few more.  The 8800 GT setup a high target for new products from NVIDIA and the 8800 GTS 512MB is able to meet it.

As this story will seem to tell you, the G80 cards will soon be gone from store shelves as they are no longer going to be produced.  It only makes sense of course, what with the stock of 8800 GTS 640MB and 320MB cards dwindling quickly.  What is more interesting here is that if G80 goes away, so does the existing versions of the 8800 GTX and 8800 Ultra — its possible that what remains in the channel now is all that will be made.  This isn’t a big surprise seeing as we are more than 13 months into the products life cycle, but since AMD still hasn’t had a competitor to G80 that has stood up to the flagship parts, one has to wonder why bother?

Smaller dies = more profit basically is what it comes down to.  I guess if you had planned on getting that second 8800 card for an SLI system you MIGHT want to start hunting for it soon.

This is a sticky area for NVIDIA right now after the botched 8800 GT release.  Over the past 12 months NVIDIA had been getting wide acclaim for having product available at launch and in enough quantity that you could actually buy them.  However, as we saw last month with the 8800 GT being released and then sold out for nearly 3 full weeks, they have a hiccup in their system somewhere.  Were they having problems making the chips?  Were they prioritizing the wafers for this GTS launch?  We can’t say for sure really, but a lot will be answered in the coming days.

The pricing on the 8800 GTS 512MB cards is expected to be between $299 and $349 according to NVIDIA documentation.  Seeing as the original pricing on the 8800 GT hasn’t been met yet, I would expect the prices on 8800 GTS cards to spike here at launch until we see the true availability sink into the channel.  Seeing as though you can find 8800 GT cards for well over the $299 mark, you would be forgiven for taking the initial pricing data with even less than a full grain of salt.

Check back in this section throughout the day and week to see updates as we get them.

The new NVIDIA GeForce 8800 GTS 512MB is an outstanding performer and proved to more than up to the challenge in our tough array of gaming tests.  Combining the energy efficient design of the G92 architecture and the pure processing power of the 8800 GTX/Ultra cards creates a new product that is cheaper yet performs surprisingly well against its G80 elders.  If you can find these cards for $299-$349 price point that NVIDIA claims you will, then it would be one of the best deals in graphics cards today.