GIGABYTE Online Overclocking Contest Honor Hardcore PC Enthusiasts at Overclocking Hall of Fame –    Over $12,000 in Cash & Prize to be Awarded –


City of Industry, CA, December 19, 2007 – GIGABYTE United, Inc., a leading Motherboard and Graphics Cards manufacturer, today has proudly announced its highly anticipated online overclocking contest kick off at http://oc.gigabyte.us/ , from December 19, 2007 to January 20, 2008. Winners will be awarded with $12,000 in cash and prize at GIGABYTE Overclocking Hall of Fame.

GIGABYTE Intel® P35 and Intel® X38 Series Motherboards are one of GIGABYTE’s greatest triumphs in the year of 2007. This remarkable success is attributed to its innovative design of Ultra Durable 2, engineered in the spirit of pushing computing performance beyond the extreme. To actively engage hardcore PC enthusiasts in all its glory and express appreciation to those helping build GIGABYTE into the powerhouse it is today, GIGABYTE will be awarding over $12,000 in cash and prizes to its overclocking contest winners. Participants will be competing with hardcore PC enthusiasts on tweaking GIGABYTE Intel® P35 and Intel® X38 Series Motherboards to unleash exceptional performance of GIGABYTE Motherboard, adding a record-breaking score to Overclocking Hall of Fame. In addition to its over $12, 000 cash and prize, Hall of Fame Champion will be awarded with GIGABYTE Dream Machine GA-X48-DQ6 to experience the next generation Intel® X48 chipset right after its first debut. Overclocking video will be published at YouTube to show off one’s ability to overclock PC beyond its limit. The top 10 video winners will also take home GIGABYTE wind breakers. OMEGA pen and laptop protectors are also given out to add excitement to the competition.

For more information to get into Overclcoking Hall of Fame, please visit GIGABYTE Online Overclocking Contest and register now at http://oc.gigabyte.us/ . 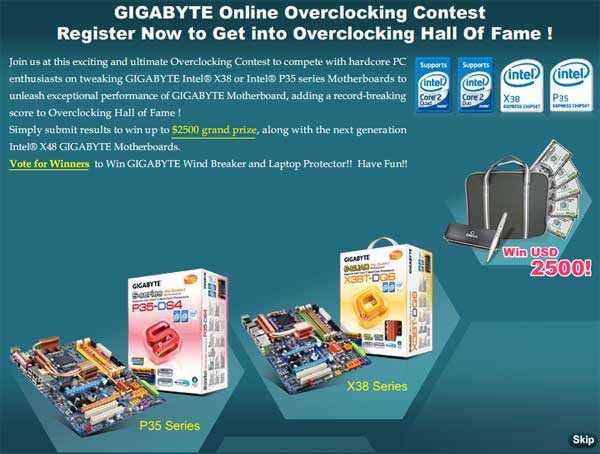