Corsair shows us another DDR3 Dominator installment: this time using Intel Extreme Memory Profiles to overclock to 1800 MHz on a CAS 7 latency. Sure DDR3 is still expensive, but now it’s also fast and easy to overclock!

Early in 2007 Corsair introduced the new Dominator line of up enthusiast memory modules and since then we have seen a remarkable adoption rate of the technology.  Not only were we impressed with the modules in our initial review of them, back in February of last year, but the Dominator modules have shown up just about everywhere we looked.  They were in numerous test systems we were provided, launched in the new Dell XPS H2C water cooled system and also showed up in both the Digital Storm Twister and HP Blackbird 002 systems we recently reviewed.  Obviously we aren’t the only ones impressed.

The Corsair Dominator modules offered the first real upgrade in passive memory cooling features in some time.  To quote our initial technology preview: 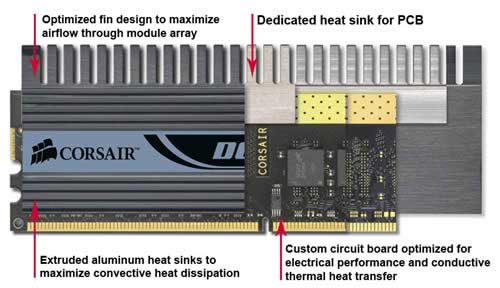 Here is a Corsair-supplied breakdown of the innards of a Dominator module.  There are actually two heatsinks on the module to help get heat away from the module itself and into the air.  One actually contacts the PCB circuit board while another makes contact with the memory modules themselves.  The fins along the top of the module make them quite tall; more so than any other module was have used but their objective is to allow airflow between them to cool the metal off more effectively.

This side-diagram shows how the exterior black is able to take the extreme heat from the memory chips to the top fins while the small silver makes contact with the specially designed PCB to get the heat off of it as well.

There is also an optional fan that Corsair offers that rests over the modules for a very direct current of air. 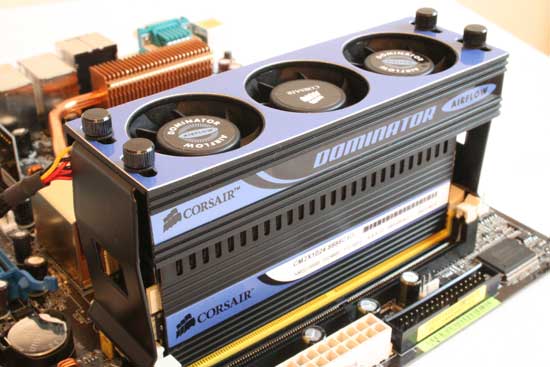 This an optional accessory for those users that want to push the memory to its overclocking limits.

For this review we are looking at a new set of Corsair Dominator modules that feature Intel Extreme Memory Profiles, a.k.a. XMP.  If you are familiar with SLI Memory technology from NVIDIA, you can think of XMP being basically the same thing but with the power of Intel behind it.  XMP is only supported on the Intel X38 chipset and the upcoming X48 chipset for now and is only offered on DDR3 modules; DDR2 users are out of luck.  More on XMP on the following page. 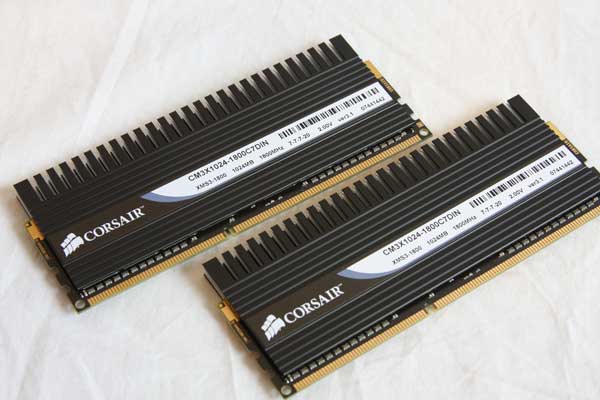 
The modules themselves still look the same as the previous Dominator’s we have reviewed and tested.  The only indication that these are XMP-capable memory modules is the “IN” after the product name. 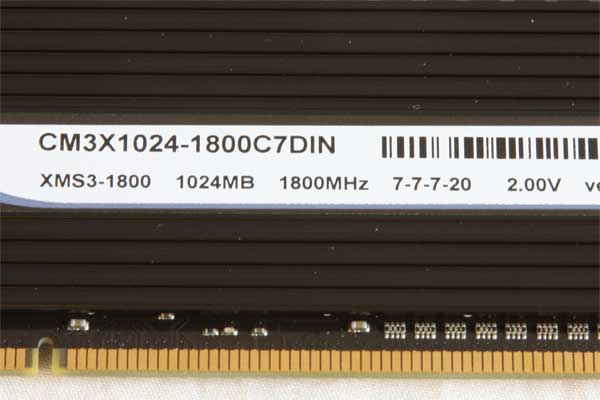 Coming in a 2GB kit, the Corsair memory modules are CM3X1024-1800C7DIN sticks; roughly translated to 1GB DDR3 modules capable of running at 1800 MHz with a CAS latency of 7.  The finer print on the label tells the rest of the story: 7-7-7-20 timings at 2.00v.  The power requirement is higher than standard DDR3 modules but Corsair uses that extra voltage to run these modules at very high clock speed and relatively low timings for DDR3 memory.

Double the memory, double the fun?

MetaRAM and Nehalem combine for up to 288GB of memory

Pick up some nice kit for your DDR3 system