Last month AMD showed off its Hybrid CrossFire technology, which allowed the motherboard GPU of the AMD 780 work in conjunction with an upcoming Radeon 3400 card.  It improved overall performance by about 50% over the motherboard GPU alone.  Now NVIDIA is finally unwrapping its competing technology, but with a slight twist.  Not only will their technology improve performance at the low end of the spectrum, but they will also greatly improve the power utilization in high end platforms using 780a SLI motherboards.

The GeForce Boost subset of Hybrid SLI is the cooperative use of the mGPU with a discrete GPU (dGPU).  This is only possible with a GeForce 8400 or 8500 discrete card, as well as an upcoming next generation mainstream offering to be announced later.  NVIDIA claims that overall performance is improved by about 40% overall, which is enough to make a fairly unplayable game into a smooth experience (assuming we stay at moderate levels of detail and resolution).

The mGPU will be the primary connection for monitors in this case, but is limited to a single digital and analog connection (either HDMI or DVI combined with VGA).  It cannot however power two digital outputs at once.  In GeForce Boost the CPU sends commands to each GPU, but they are set to render different frames.  The frame buffer information in the dGPU is then BLT over to the mGPU for output.  This is essentially Alternate Frame Rendering, but without the use of the Over The Top (OTT) connection that regular SLI utilizes. 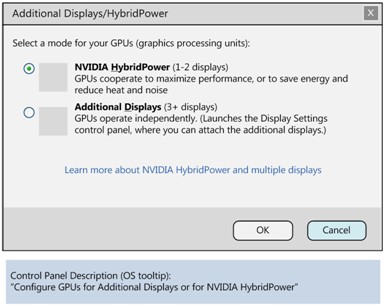 NVIDIA will initially have a toolbar icon that will allow users to quickly change Hybrid SLI modes.

Hybrid Power is the second major technology announcement with the new 700 series of chipsets for AMD (and eventually Intel).  Most desktop applications do not require major graphics power, and even Vista’s Aeroglass runs perfectly fine on integrated parts supporting SM 2.0 functionality.  It makes little sense for a user with 2 high end cards in SLI to run them at full power when just doing desktop application work or surfing the internet.  The only downside to Hybrid Power is that it requires that the discrete card supports that functionality, and currently no GeForce card features that quite yet.

By using the GeForce 8200 chip in the enthusiast platform, NVIDIA now has a nice way to reducing the power consumption of a high end system running multiple cards.  The PCI-E 1.0 and 2.0 specification includes SMBus support, which can power down or power up an attached graphics card.  So when a user is only in a desktop environment, the system can shut down the standalone graphics cards and use the mGPU for most tasks.  Initially the user will have to use a toolbar application to change modes, but eventually NVIDIA will make the switching transparent to users.  This functionality will only work in Vista, and not in Windows XP. 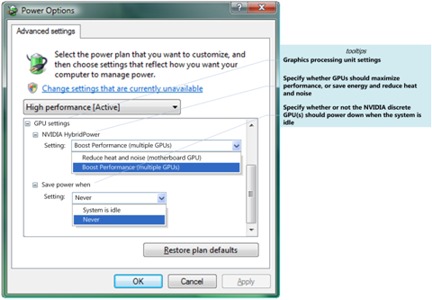 Eventually support for Hybrid SLI will be transparent for users, and it will intelligently choose the mode most suited for the application at hand.


By turning off the dedicated graphics cards during use, NVIDIA is allowing the user to save not only power, but also turn down the noise emanating from their computer during regular use.  Two 8800 GTs are not exactly silent in operation, even at idle.  High Definition playback can also be exclusively handled by the GeForce 8200 part, so decreased fan noise during movie playback is also a big positive.

Hybrid Power is not only aimed at the enthusiast space, but also at the mainstream and budget platforms as well as notebooks.  The notebook area is probably the one which will see the greatest impact from the decreased power consumption.  Quite a few upcoming notebooks will feature the 8200 mGPU bundled with a standalone card that can utilize both GeForce Boost and Hybrid Power.  In this instance users can have their cake and eat it too.  Not only do these notebooks feature outstanding power life when using integrated graphics, but performance can be improved by using GeForce Boost or just using a higher end discrete card in the notebook.

The one slightly disappointing aspect about Hybrid SLI is that it does not support the use of heterogeneous combinations.  The 8200 will only work with the 8400/8500 series of cards (as well as the unannounced next gen mainstream part).  So those with 8600 GT parts and above will not be able to use their cards in conjunction with the 8200.  With Intel buying up Havok, we also do not expect GPU powered physics to take off.  So using the mGPU as a dedicated physics processor along with the dGPU handling rendering duties is nothing but a dream at this point.  A nice dream though.

Hybrid SLI is not a knee-jerk reaction to AMD’s Hybrid CrossFire, as NVIDIA has been planning this for quite some time.  It is in fact a logical solution to issues that have increasingly become major nuisances for PCs… namely power consumption, heat production, and noise.