The 780a, 750a, and 730a will all utilize the base GeForce 8200 part.  This is a surprising turn as most enthusiast platforms shun the idea of an integrated part, but in this case they may actually embrace it.  NVIDIA will be implementing their Hybrid SLI technologies to improve both the performance and power consumption of systems from top to bottom.

The 780a will be the enthusiast offering, and the GeForce 8200 will be paired with the nForce 200 chip to provide an extra 32 PCI-E 2.0 lanes for support of SLI and Tri-SLI.  I will detail the nForce 200 shortly, as it offers some interesting new technologies to help improve communication between the GPUs in SLI applications. 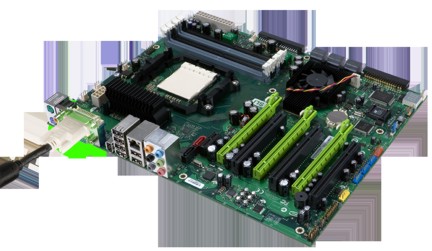 The mighty 780a will be the enthusiast’s choice when it comes to AMD motherboards supporting SLI.  Note the digital PWM that NVIDIA has implemented in the reference design.  Also of note is that it will be the first enthusiast class board with built in video.


The 750a SLI is the GeForce 8200 mGPU with the 16x PEG connection split into two 8x PCI-E 2.0 lanes.  This will still support both GeForce Boost and Hybrid Power, but again only with the compatible graphics cards.

The 730a is the most basic offering with one 16x PCI-E 2.0 slot that is non-splitable.  This will be the bread and butter chip for budget ATX boards, replacing the current nForce 520/550/560 chipsets.  It is slightly different from the others in that it supports GeForce Boost, but does not support Hybrid Power. 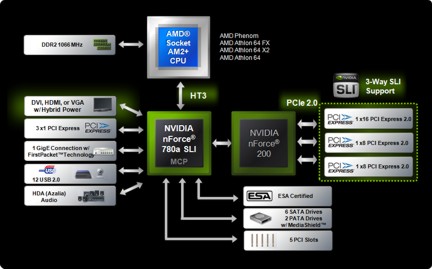 The block diagram of the 780a shows that it is essentially the GeForce 8200 attached to the nForce 200.  In this case, the “one size fits all” philosophy actually works out quite nicely.


The final SKU will be simply the GeForce 8200 which supports both Hybrid Power and GeForce Boost.  This will be used in the majority of micro-ATX boards powered by NVIDIA for AMD processors.

We have seen this chip being offered with the latest 780i chipsets from NVIDIA, but it was treated more as a sidenote than something of distinct interest.  When NVIDIA released this number it still had not been awarded several patents for technology included in the chip.  Now that the patents have been awarded, NVIDIA decided to let us all in on the secrets of the nForce 200 chip.

The primary function of the nForce 200 is to act as a PCI-E 2.0 switch for the graphics cards residing in the PEG slots, but it now does a couple of extra tricks to increase performance and cut down on CPU usage.  The nForce 200 is connected to the 780a chipset through the 780’s native PCI-E 2.0 16X connection.  It then turns those 16 lanes into 32 lanes to attach up to 3 cards in SLI.   It runs the slots as 1 x 16 and 2 x 8.  It also can do 4 x 8x PCI-E slots, but oddly enough not 2 x 16.  NVIDIA figures that 8x PCI-E 2.0 lanes are more than adequate to feed current and upcoming graphics cards.

No need to go all the way to the CPU when one GPU needs to write to the others!  Nothing to see here Mr. Phenom, please move on.


The second feature is a broadcast functionality that also is designed to take much off the load off of the CPU.  When the CPU needs to send a write to all of the GPUs, it typically has to individually send that write to each one.  With the broadcast feature the CPU only has to send one write, and the nForce 200 then handles the delivery to each individual GPU, again offloading work from the CPU.

Issuing one command is far easier than issuing four.  We are all for offloading tasks from the CPU.

It is certainly about time that NVIDIA has added a bit of excitement to the chipset scene with the release of the 700a series of chipsets.  The Hybrid SLI and Hybrid Power functionality will also be very welcome by a lot of users of desktops and notebooks alike.  In a time where consumers are becoming much more power conscious (cost of energy, Green movement, etc.) NVIDIA is hitting the right chord.

If there was one complaint about this release it is the lack of forward looking “new” features at the very chipset level.  When NVIDIA announced the original nForce chipset in 2002, it was truly a turning point in the industry as they had included everything except the kitchen sink into the product, and really started along the “distributed computing” paradigm.  While NVIDIA has improved their chipsets when it comes to speed, compatibility, and integrating new features such as SATA 2.0, in many ways they haven’t really moved beyond what they introduced all those years ago.  In fact, with the deletion of the original SoundStorm DSP, we can argue that they have in fact gone backwards in ways.  With the latest 700 series they have also taken away the second Gig-E port (though honestly it was a feature that was hardly used by anyone) and DualNet with teaming.

It is good to see that NVIDIA is still focusing on the AMD platform as well as their latest Intel based parts.  There will be a lot more competition from AMD this time though, as they already have their AMD 700 series of chipsets on the market and will soon be releasing their DX10 based AMD 780 chipset.  Initial word is that the GeForce 8200 is going to be slightly slower than the competing AMD part, but the differences will likely be far less than what we saw with the AMD 690G vs. NVIDIA 7050 PV.  The inclusion of a full DX10 integrated part will win NVIDIA some business, and will honestly help AMD sell more processors because of the quality of the integrated parts as compared to what Intel has to offer.