Alienware is pretty good about making the purchase of your high end system feel like a special occasion.  High quality design, boxing and extras all add up to that. 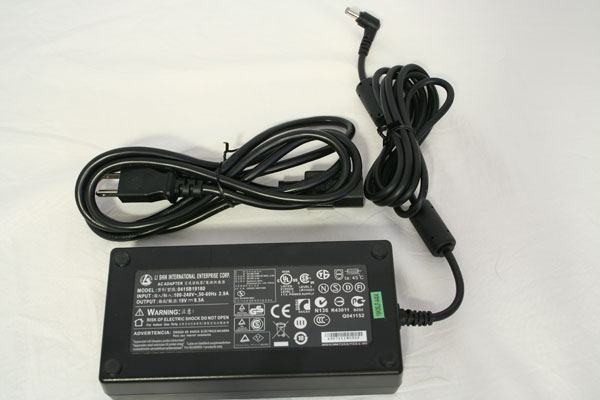 First, let’s look at the power brick for this notebook: and I do mean brick.  The power plug sitting behind the AC/DC converter should give you some sense of scale.  Looking closely at the values on the power supply, the output is rated at 19V and 9.5A, producing a top power output of 180.5 watts.  This wattage is the MOST the system could draw from the power brick though taking the 80% rule into affect, most likely it would top out at 145 watts or so.

For comparison, the Asus Eee PC 4G’s power supply would max out at 18 watts or so. 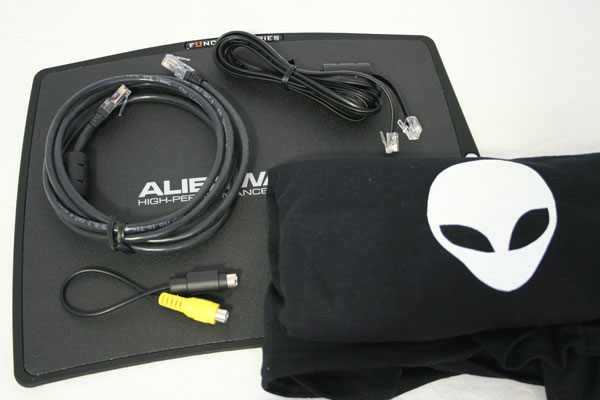 Besides the necessary power connections, Alienware is also providing its users with a bounty of goodies including a Cat 5 networking cable, standard phone cable for the modem, and S-Video to composite adaptor, an Alienware mouse pad (very nice quality, like a Ratpadz or similar) and the ever popular alien head logo T-shirt. 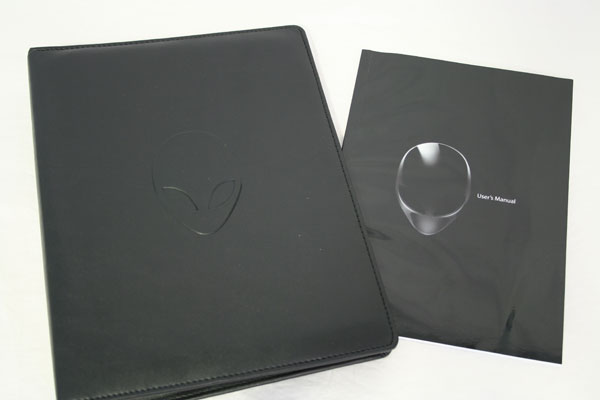 The user manual, warranty information and restore data is kept nice and neat in a leather (or nice faux-leather, I can’t tell) binder with the Alienware logo on the front so you don’t accidentally toss it with the rest of your school garbage.

One thing that we really don’t like in our pre-built systems or notebooks is the bloatware that is seen on most retail models.  Companies like Toshiba, HP and others are notorious for loading up your new computer with software that is usually useless to the eternal drive to make money: those companies pay to have that software pre-installed. 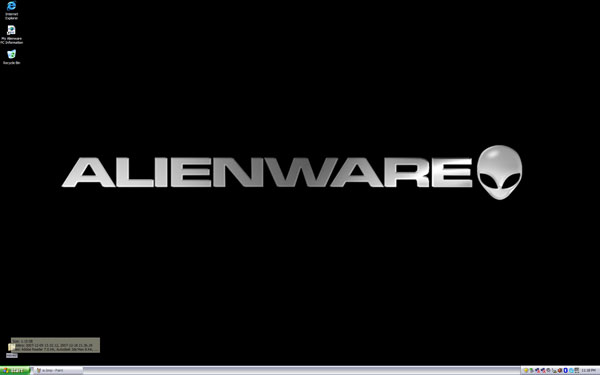 Luckily, Alienware would seem to agree with us.  This is what I was met with when turning on the sample for the first time.  Only three items on the desktop: My Computer, Recycle Bin and a link to a (local) web page that shows all your system details.  In the task bar you only see the standard Windows components plus an audio and Quicktime control panel. 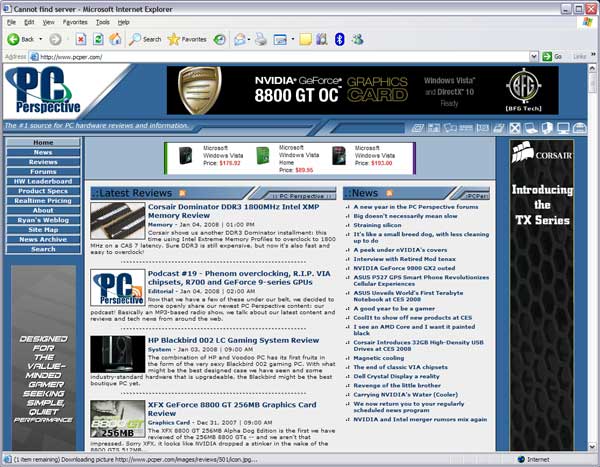 Loading up Internet Explorer, the second most targeted area for that bloatware, shows nothing out of the ordinary – another positive mark! 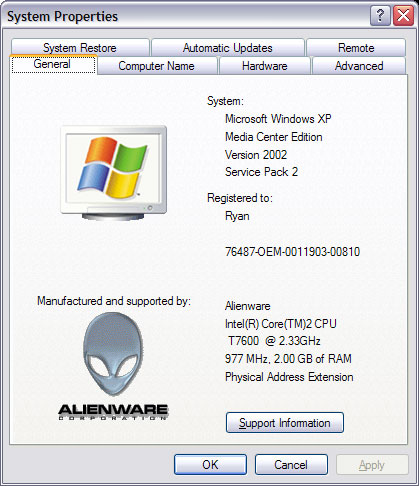 The Alienware m9750 system is built around Windows XP Media Center Edition in order to take advantage of all those media features including the audio/video inputs.  The system is built around a dual-core Core 2 Duo T7600 mobility processor with 2GB of DDR2 memory.  The clock speed of the processor is showing here at 977 MHz, a result of the attempt for battery savings by enabling the Intel power savings features.

The use of Windows XP MCE might seem somewhat quizzical at first, but the reasons behind the move are pretty simple.  First, Alienware had more experience with XP (we got this system some time ago) and graphics performance (especially SLI) is still better on XP than on Windows Vista. 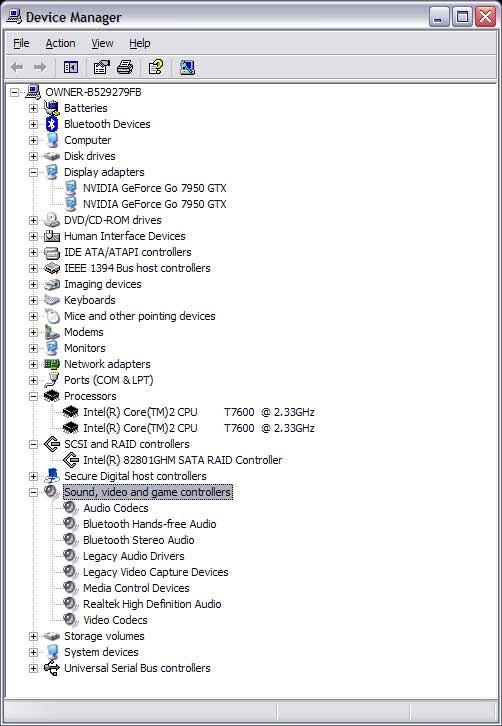 Our m9750 came configured with a pair of GeForce Go 7950 GTX GPUs running in an SLI configuration.  You can also see that support for stereo Bluetooth is built in allowing for wireless stereo headphones to be used with the m9750. 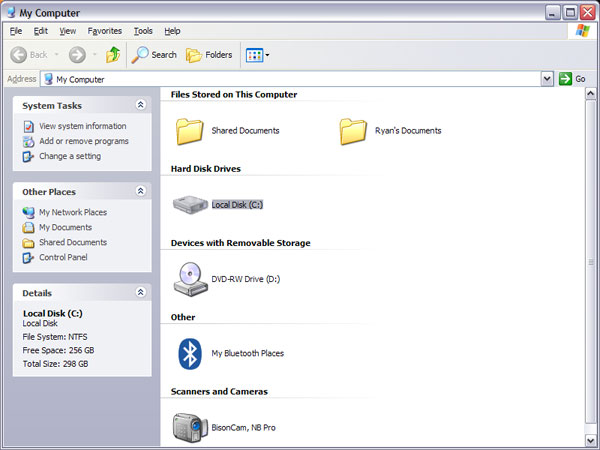 The two hard drives included in our build were 150GB 7200 RPM drives, but placed in RAID 0, it creates a single 300GB drive at top speeds.

Other than that, the system was basically a blank slate ready to be used.  Installing games and applications on this notebook is not an issue – it obviously has the room to spare with 256GB of free space. 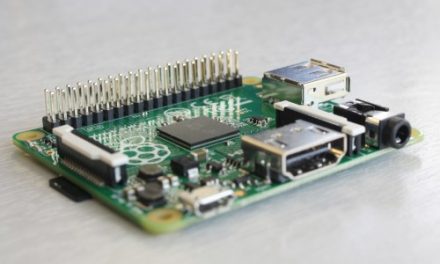 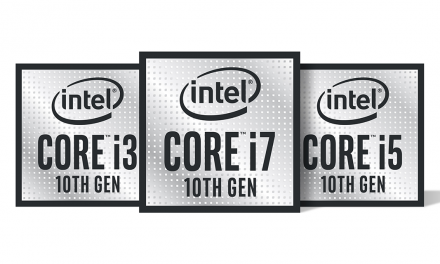 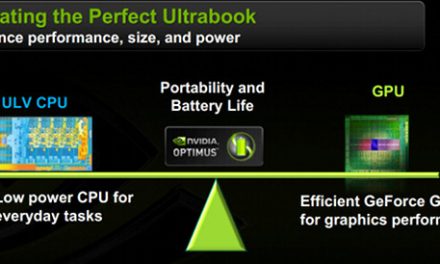