I should start out my testing notes by being very up front: AMD had some requests for us when sending out the components for the CrossFireX testing system.  First, they wanted the system to be showcased on an AMD platform: AMD Phenom processor and 790FX motherboard.  Second, they had a handful of games that they wanted to show the performance and scaling of and asked that we show those titles for this particular article.  Lucky for me, all of the games that AMD asked us to test (Bioshock, Call of Duty 4, Crysis and UT3) were already in my standard GPU testing suite, so that was a given.  After that though, I was told we could do all the testing we wanted on any platforms, games, etc that we wanted.

While some of you might jump up and say that having AMD put those stipulations on us seems unfair or puts this preview in a bad light – I understand.  However, since I am actually playing the games in these benchmarks and evaluations, no timedemos or scripted run throughs, it’s nearly impossible for AMD to be doing any kind of “cheating” with the games and performance.  In any event, we’ll be following up this look with a much more comprehensive and normal GPU review.

The system that AMD provided is about what you would expect: AMD Phenom 9900 @ 2.6 GHz, MSI 790 FX motherboard with 2GB of Corsair DDR2-800 memory and a single Raptor 150GB hard drive with Windows Vista x64 installed.  We used a beta driver revision that AMD provided and were off to the races.

Below is a shot of the test system as it was initially configured: two HD 3870 X2 cards running in CrossFireX mode. 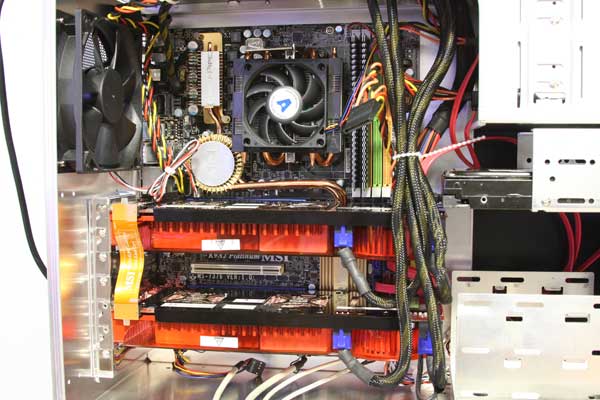 Running these cards is simple and works just like standard CrossFire or SLI – two dual-slot cards connected by a bridge.  Even though the two cards each have two GPUs on them, installation and configuration was simple.

Here you can see the four GPUs showing up in our device manager.

These cards were clocked at 825 MHz core and 901 MHz memory – reference speeds.

Unlike with a single HD 3870 X2, there is now a CrossFire option in the driver that we can check to enable four GPU computing.

Perhaps a more common GPU configuration will be the pairing of a user’s existing HD 3870 512MB card with a new HD 3870 X2 card, effectively getting three GPUs in your system with two graphics cards. 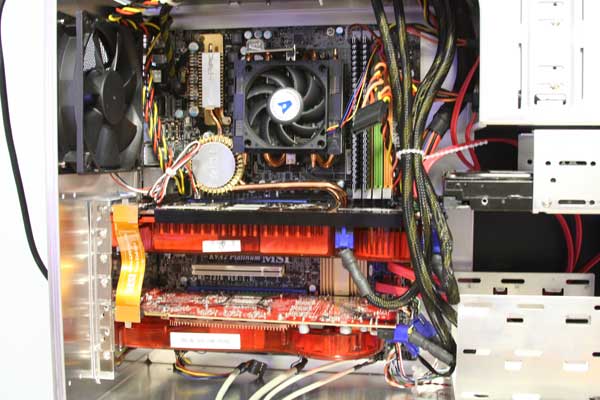 Again the setup is easy; even though the standard HD 3870 has two CrossFire connectors, only connecting one is possible or required.

Here we see the 3870 X2 with the same clocks as those listed above.

But the standard HD 3870 512MB is running at a slower clock rate and higher memory speed.  We’ll see how this affects overall performance in the coming benchmarks.

And finally, the handy CrossFire option is again available.

Another option that CrossFireX enables is the use of four separate graphics board (or three) as we have shown below. 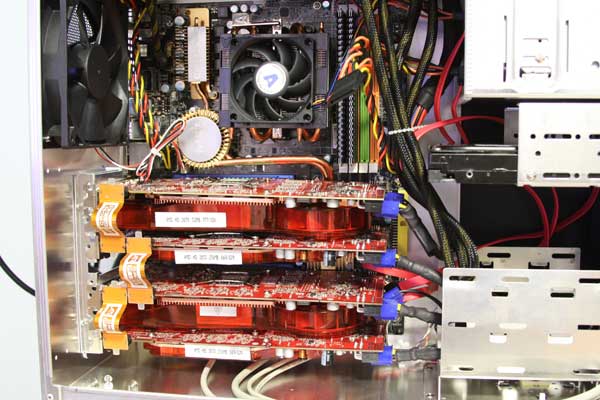 There are two HD 3870s and two HD 3850s here configured for CrossFireX – we didn’t do benchmarks on this setup quite yet will do so very soon.

On the following pages now, you’ll see the results of our benchmarking and testing of the CrossFireX platform preview.  The results will be broken down in an easy-to-read manner so you can see the scaling from a single HD 3870, all the way up to a pair of HD 3870 X2 cards.