What is a GPU article without a little power consumption testing? 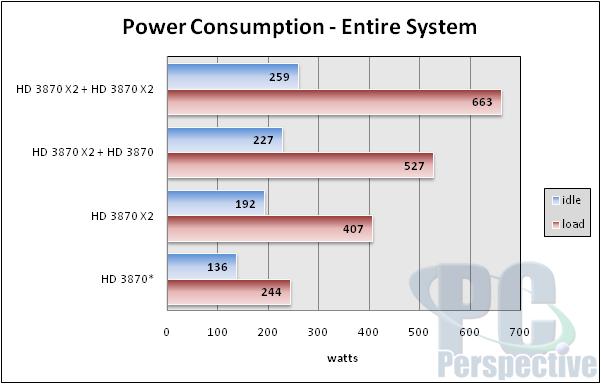 As you might expect, the power consumption of your system increases dramatically as you quadruple the number of GPUs you shove into it.  Our system with a pair of the HD 3870 X2 cards in it peaked at 663 watts while playing Call of Duty 4 – having a power supply that handle 800 watts or above is really going to be recommended here.  Interestingly though the idle power boosts are very manageable and a testament to the 55nm process that has had RV670 riding high.

Looking at the real meat of this initial CrossFireX preview, we have to see how impressed we are with the scaling ability that the software gurus at AMD have delivered.  As Terry mentioned in our opening Q&A, the differences between titles that use DX9 and those that use DX10 is going to be noticeable in the interim moving forward.  DX9 titles are easier to get working with three and four GPUs, at least according to the AMD team, and thus more DX9 titles will be supported with less work.  DX10 games, though they are still somewhat rare, are another issue.  Looking at Crysis and Bioshock, we can see how the fourth GPU isn’t exactly utilized in the way the third GPU is; Terry has already explained the difficulty in this area.

Of the four games I tested for this preview, the only one that saw definite, noticeable performance benefits in-game comparing the three-GPU configuration to the four-GPU configuration was Call of Duty 4.  Crysis also saw a slight gain, though mostly in the minimum frame rate which is pretty important to overall playability.  Bioshock did see a nice jump when going from two GPUs to three GPUs and it looks like for now three GPUs could be a better price/performance solution that four.

We should again note that this is just a preview – we have many more games to test and AMD promises that this selection is just the middle ground of how well the CrossFireX software performs.  We’ll be doing more testing this week on the rest of our titles including Call of Juarez, Lost Planet, World in Conflict and others, so be sure to keep checking back for performance updates!

The CrossFireX as a Platform

One of the main benefits of CrossFireX, and standard CrossFire before it, is that it is a much more open solution that NVIDIA’s SLI.  CrossFireX will run on any PCIe based AMD chipsets including the new 790FX we used in our testing, Intel chipsets such as the X38 and X48 as long as they have enough PCIe slots for the GPUs you have, NVIDIA chipsets and even the recently released Intel Skulltrail platform.  That gives the gamer a TON more options for their system – AMD or Intel processors, nearly any chipset or motherboard.  NVIDIA just can’t say that with SLI: it’s their way or the highway, so to speak.

CrossFireX will also allow for a lot more flexible system building and upgrading for enthusiasts.  Say you already own an HD 3870 512MB card – now you can simply buy an HD 3870 X2 and throw it in your system, install the CFX driver and boom, you have three GPUs working for you instead of one.  If you already have a CrossFire setup with 3850s or 3870s, you can still add to them if your motherboard has room to accommodate.  The only thing that I will not recommend though is pairing up 512MB cards with 256MB cards as the performance penalty you pay for dropping your 512MB cards down to 256MB buffers will likely stimey a lot of your CrossFire gains.

As I have said in my other editorial commentary on multi-GPU systems, the real question mark here will be in 6-12 months, when the RV670 is no longer the top dog architecture.  Will AMD and its driver team continue to support CrossFireX on this platform, making improvements and fixes for new games?  Multi-GPU performance is really all about the software, be in the game itself or the drivers from AMD or NVIDIA, and it takes a HUGE commitment from the GPU vendor to press on with the multi-GPU coding.  NVIDIA has a relatively good history, with the obvious exception of the Quad SLI fiasco, and AMD/ATI’s has been decent as well.

We’ll be eagerly watching how BOTH companies adjust going forward.  We’ve got our eye on you!!

The great news about CrossFireX – all the hardware you need is available today.  All of the GPUs, motherboard and processor (well, not at 2.6 GHz) we showed and tested are for sale right now.  The only thing you are lacking is the driver which will be available by the middle of March I am told; probably before that.  Pricing on the HD 3850 and HD 3870 has continued to impress and the RV670 has been the savior of AMD’s GPU division since it was launched.  The HD 3870 X2 is also available at its MSRP or below and has been since the day of its release.

Our initial preview of AMD’s CrossFireX technology is very positive.  Even though the performance benefits of four GPUs is questionable based on the performance numbers we saw today, the flexibility that allows users to configure three GPUs in CrossFireX mode is much more appealing.  In titles like Call of Duty 4, the benefits of four GPUs can really be seen but in other cases, three seems to do the job just as well.  Either way though, AMD has opened up a whole new world of gaming options for enthusiasts by allowing such a diverse combination of hardware.  The AMD team seems dedicated to this vision of support one, two, three and four GPUs in a single system and if they can keep up on the software end, we’ll all have another reason to put AMD graphics cards in our systems.

Please, join us in the PCPer GPU Forum to discuss this technology and our review!


Use the PC Perspective pricing engine to find the best prices on AMD graphics cards or anything else you need!