This is a pretty interesting design idea: taking the heat that is generated by the motherboard chipset and using it to power the very fan that cools it.  Pic and description from engadget. 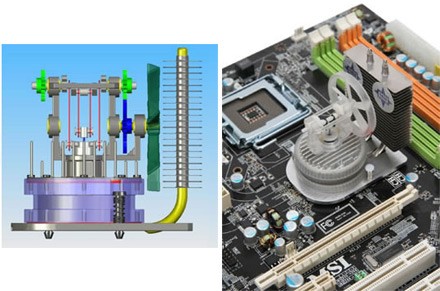 Okay, try not to let your mind get blown by the possible time-space paradox we’re about to illustrate, but MSI’s supposedly introducing a new ECOlution motherboard at CeBIT with an “air powered cooler” that operates on the Stirling Engine Theory to transform the thermal output of its chipset into the kinetic energy necessary to power that same chipset’s fan. Of course, as the fan cools the heatsink it deprives itself of energy, supposedly the piston affixed to the crankshaft pulls back down, giving it another potential surge when its heat rebuilds. Supposedly it works at 70% efficiency, so we’ll just let the thermodynamics geeks in the audience mull over the possibility and audacity of it all — they certainly seem to have given up on Steorn at this point.