While we took an initial look at the 3850 some months ago, we had the chance to do a full review on VisionTek’s 3850 offering. Does it trump other boards based on the reference design, or does the tremendous value of the HD 3850 overshadow all?

VisionTek is a name that has been around the industry for quite some time, but as many well know, it has not always meant the same thing.  The original VisionTek was one of the few board makers that actually produced product in the US.  Unlike most other manufacturers with lines in Taiwan and mainland China, VisionTek produced all of their boards in their US plant in Illinios.  Due to some unfortunate business and ethics decisions, VisionTek had to close its doors.  The Hartford Computer Group acquired the VisionTek brand in 2002 and have concentrated on producing ATI based graphics cards and peripherals.  This was quite the change, as the brand previously had been 100% NVIDIA affiliated, and in fact produced a lot of the reference boards for NVIDIA. 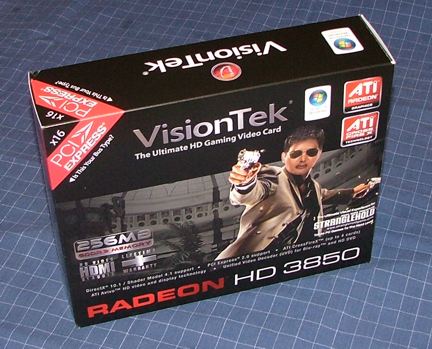 Don’t be fooled by the box, Stranglehold is not included.  VisionTek just thinks that Stranglehold will work nicely with its card.


Since the time the name has been acquired, VisionTek has been kept on a pretty tight rope.  The company appears to be well run, as they certainly have not been causing waves in the financial arenas.  It was not cost effective to produce boards in the States, as the cost of labor as compared to China is pretty tremendous.  So VisionTek has outsourced production but has continued to package and distribute their products in Illinois.

VisionTek ATI/AMD based cards have not been as visible as those from their primary competitors, namely Sapphire, Asus, and MSI, but they are starting to get a more dedicated following these days.  They are also very competitive with price and offer good warranties and support.  They offer a lifetime warranty on the card I am reviewing, and they also offer toll-free technical support 5 days a week.

The graphics division of AMD had a pretty tough year after the release of the very impressive Radeon X1900 series of cards.  While those boards were certainly more than competitive with the NVIDIA GeForce 7 series of cards, there were a few drawbacks concerning heat and power.  The cards themselves were often faster than what NVIDIA had to offer at their respective price points, and the image quality was a step up as well.  Unfortunately for AMD, the R600 architecture was very late in getting off the ground.  Not only that, but it was something of a lightweight in terms of performance when compared to the 8800 series of cards from NVIDIA that had been out for around 6 months by the time it was released.

AMD took its lumps and released their 65 nm HD 2600 and HD 2400 cards, and due to their price/performance/power/heat ratios, the cards were pretty popular with many users and OEMs.  The R600 that the HD 2900 XT was based on was a beast of a chip, but in many ways it was not fully optimized for current usage.  The chip itself was 700 million transistors in size made on TSMC’s 80HS process.  It runs at 740 MHz and was the first chip to support a 512 bit bus to main memory.  Technically it was an impressive achievement, but unfortunately it was too hot, too big, and too slow as compared to the competition. 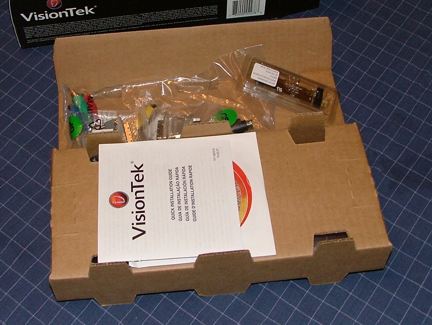 With this budget card, VisionTek just used cardboard to package the product.  No foam here.  However, the unique folding design does protect the card quite nicely.

The graphics guys at AMD did not sit around and mope about their situation, and instead focused on bringing the next iteration of the R6x0 architecture to the market.  It had to be smaller, more feature packed, cooler and power efficient than the previous HD 2900 XT.  The RV670 is a pretty hefty redesign of the R600 chip, and it adds some very nice features to the fray.  It is made on TSMCs 55 nm process, and as such is a full node smaller than the 80 nm R600.  Overall it is about ½ the die size of the older R600.  It also pulls less than half the power of the old R600 when run at comparable clockspeeds.

Size reduction and transistor performance were not the only features addressed with the RV670.  It is the first DX 10.1 compliant chip.  While not a major upgrade from DX 10, it is still significant when dealing with global illumination and other areas in which developers are interested in addressing.  It also adds Avivo HD support for high definition video playback.  AMD does have a leg up in terms of video playback quality, especially with noise reduction turned on.  There are some nasty artifacts with the NVIDIA PureVideo and PureVideo 2 with NR turned on (ghosting of images in dark screens), while the Universal Video Decoder on the AMD part does not show the same issues.

There is one rather unfortunate thing with the redesign though.  The biggest issue that has not been adequately addressed is that of multi-sampling AA performance due to color resolve using the shaders.  AMD claims to have improved the latency in the communication between the render backends and the shader units, but in reality the difference is pretty minimal.  The question we ask ourselves is why AMD decided to go that route?  No definitive answer has ever been given, but I can imagine that in a smoky back room filled with GPU architects someone was asking how to cut down the transistor count and another person suggested, “Why don’t we take out color resolve in the ROPs and make the shaders do it… I mean, we have 320 shader units, don’t we?”  To that there was much head nodding and back slapping, all the while one person was sitting quietly wondering, “Can we make it fast enough to be competitive?”