The RV670 also cuts down the internal ringbus from the whopping 1024 bit affair with the R600 to a much more manageable 512 bit bus, much like the older Radeon X1900.  They have also cut down the size of the main memory bus from 512 bits to 256 bits.  It seems that 512 bit bus giving 105 GB/sec of bandwidth on the HD 2900 XT was simply overkill, and AMD felt they could do more with less in this case.  When considering PCB costs, having a 512 bit supporting product was expensive to produce as compared to a more traditional 256 bit part.  AMD also adjusted the innards of the RV670 to more adequately and efficiently use the available memory, though they are rather quiet on what exactly they have done.  Most likely it was achieved by working on optimizing the texture address units, as well as adjusting the sizes of the internal caches.

Through this all, AMD has managed to take the 700 million transistor R600, improve upon its features and add to performance, all the while cutting it down to a 666 million transistor part which is the RV670.  What was originally considered a dog in the HD 2900 XT form, the new Radeon 3800 series of cards have been turning heads with their price, power, and performance. 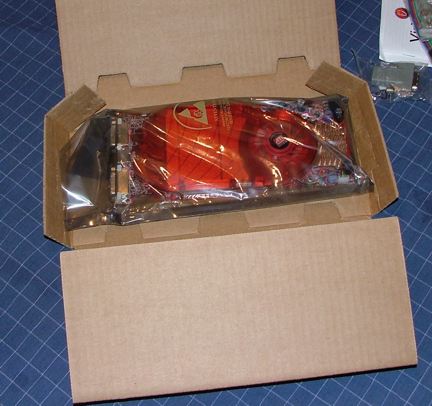 Once the user folds out the cardboard, they are greeted to the lovely sight of the anti-static bag surrounding the HD 3850.  This would probably take some serious beating until it hurt the card.

Just like its older brother, it can work in CrossFire as well as output a HDMI video and audio signal through the included DVI to HDMI dongle.  It is a single slot card that makes hardly any noise, even when things are getting warm under the hood.

In terms of visual quality, the 3850 is identical to the HD 2900 XT.  The anti-aliasing support now features 2, 4, and 8 samples as compared to the older 2, 4, and 6 samples that were introduced with the Radeon 9700 and carried through to the X1950.  Anisotropic filtering is not as sharp as what NVIDIA offers, but it is pretty close.  Only in applications which feature long view distances with repeating textures does any kind of difference pop out.  The programmable nature of AMD’s multi-sample units is pretty interesting, but overall quality in AA is the domain of NVIDIA at this time.  Once we truly consider the performance impact this programmable AA has on the AMD parts, then the NVIDIA unit looks far more impressive.

VisionTek went with the reference AMD design, and in fact it is identical in most ways to the reference boards I received from AMD.  About the only difference is that the VisionTek board is of a slightly newer PCB spin, other than that the components look identical.  This is not to say it is a bad thing, as the original design is chock full of quality parts with excellent build quality.  The boards I have use a mix of polymer and electrolytic caps.  The cooler and fan are the same on both, but they are both pretty heavy parts and they keep the unit nice and cool.

The VisionTek packing is not particularly exciting, but it should fulfill most needs.  Unless of course one of those needs is a free game bundled with the card.  Then the user will be sorely disappointed.  The package does include a DVI to VGA adapter, DVI to HDMI adapter, S-Video to component, and S-Video to composite.  It also includes the CrossFire ribbon.  They have a small manual on how to successfully install the card, as well as the necessary drivers for most operating systems. 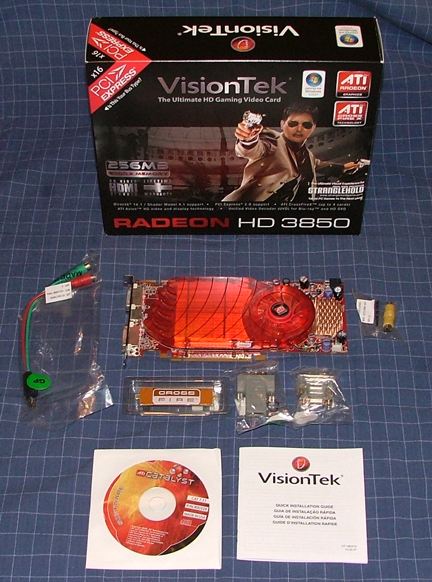 The contents are pretty simple, but they are enough to get most users up and running without a problem.  One of the only basic things missing is a 4 pin molex to 6 pin PCI-E power connector, but most computers these days should have the correct connector on their power supplies.


The package is not exceptionally well fleshed out, but it is not spartan either.  Considering that it is a $169 card, and a pretty fast one at that, we can certainly give VisionTek a bit of slack.  The other two big selling points are the lifetime warranty (whatever the lifetime of the product is) and the toll free tech support 5 days a week for North American buyers.

VisionTek does not bundle specialty drivers, and everything pretty much relies on the reference designs and software from AMD.

To sell this product the company is basically relying on a good reputation for build quality, a good warranty, free tech support, and a pretty low price.  A couple of manufacturers like GeCube are offering mail in rebates bringing the price down to $149 in some instances, but the user gives up the lifetime warranty and toll free tech support.  Plus, mail-in rebates are pretty notorious for not exactly being prompt.