This is a new title based on an optimized SupCom engine.  It features a built-in benchmark that follows around the battles between 4 opponents.  All settings were maxed out with 4X AA and 16X AF enabled.  Both minimum and average framerates were recorded.


Needless to say, this game can get a bit choppy at times.  This is not a big deal, as it is not a twitch game but rather a realtime strategy.  The 3850 suffered less during these slowdowns, but not really by all that much.

Neither of these cards are barnburners when it comes to this title, but again the 3850 rises to the top by a considerable percentage.

I enabled DX10 functionality with this title, but I kept settings at a reasonable 1024 x 768 while testing medium and high settings.  Very High settings resulted in slideshows for both cards, so it was not included in these results.  No AA and 16X AF were enabled.  I used the built-in GPU benchmark to gather the results.


High Quality settings proved to be too much for either cards, but the experience was at least playable on the 3850 at medium quality.  The 8600 GTS was just chugging when it came to any real gameplay, and to get a decent experience the game had to be run at 800 x 600 with medium settings.

To round things off I decided to test Fable, which is an Xbox port using DX9 technology.  It does feature some interesting shader effects as well as a lot of shadowing that has proven difficult for Radeon cards in years past.  All settings are maxed out and I made a manual run-through of the first village using FRAPS to capture framerate information.  4X AA and 16X AF are enabled along with bloom lighting.


The basic story has not changed here.  The 3850 still is a lot faster, and a lot smoother at both resolutions.

The HD 2900 XT was the king of power consumption for the last generation of cards.  It could pull up to 220 watts on a bad day, and that is not exactly something to be proud of.  AMD put a lot of time into making the RV670 a lot more efficient through both design and by using TSMC’s 55 nm process.  I took the power readings of the system (sans monitor) at both idle and load with both the 3850 and the 8600.


Though it is a much more powerful card, the HD 3850 did not pull much more power than the older 8600 GTS.  I was quite surprised by how well the 3850 dialed down at idle as compared to the older card, and being only 4 watts higher at load is something for the AMD engineers to be proud of.  For reference, the 8600 GTS I used here does not use the external 6 pin PCI-E plug. 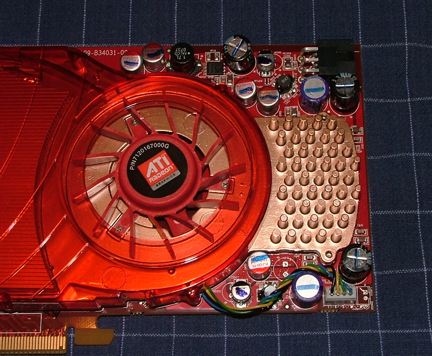 I take a close up look at the power circuitry on the HD 3850.  It is a good mix of poly and electrolytic caps, all of which are quality units.  It is unlikely the electrolytic caps will burst after years of heavy use, as the poly caps are strategically placed to handle the heavier loads and higher temperatures.

This is an interesting endeavor, as the big brother of the 3850 is the 3870 which runs at a nice 775 MHz clockspeed.  I used the integrated Overdrive function to get to near the final clockspeed, but had to ease it down a bit from the recommended speed once I experienced lockups in 3D applications.

When the dust finally settled I was able to achieve a 759 MHz core overclock, with the memory running along at a brisk 1044 MHz (2088 MHz effective).  When running benchmarks the card received a fairly impressive 10% overall performance gain due to the overclock.

The card did get pretty hot to the touch at this speed, and the integrated sensor was reporting temperatures around 85C and higher at load.

For some strange reason I have always enjoyed reviewing midrange products.  While the high end is always fun to see, I know that the majority of people out there buy these midrange cards.  It does provide a challenge to see how to improve performance and make most games run at acceptable levels of quality with cards that are affordable to most users.

The 3850 simply redefines the midrange at this time.  Unlike the previous X1950 boards, the 3850 is actually released well before the competing product from NVIDIA.  This gives AMD a very significant lead when it comes to addressing this very important market, and they have gained a lot of traction by releasing it in good numbers before the end of last year.

Currently the 3850 series is well represented with product, and VisionTek has provided a very minimalist yet quality part for its price.  Throw in the warranty and support that VisionTek provides, and it certainly is one of the more attractive offerings out there.

This card would make a great casual gamer, and because of the low fan noise it would fit in quite nicely in a HTPC environment.  The inclusion of Avivo HD/UVD support makes this a no-brainer for those wanting a good quality card with excellent HD playback and TV support.  The HDMI output with included 5.1 audio is another big plus.

VisionTek looks to make a pretty good card, and they do not charge and arm and a leg for it.  The 3850 itself is a fabulous product which brings last year’s high end performance to mid-range levels.  The RV670 chip has proven to be a great product from AMD, and it is a fantastic part for its price.  Now we just need to wait and see how NVIDIA responds with its upcoming GeForce 9600 series set to go head to head with the 3850 later this quarter. 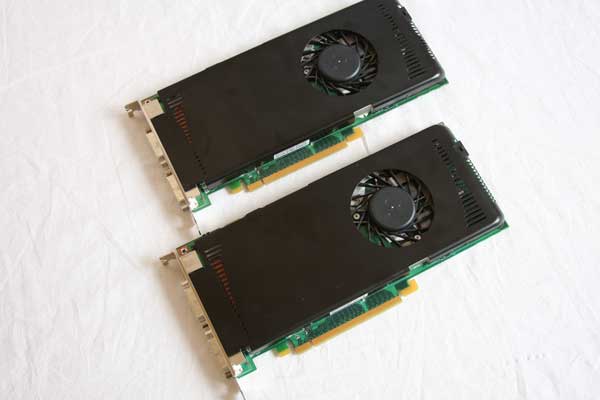