The AMD 780G chipset combines powerful integrated graphics, an improved SB700 south bridge and support for Athlon X2 and Phenom processors to offer by far the best IGP solution we have seen yet. And Hybrid CrossFire might just make 780G worth while for more than you might think.

The first chipset to come from the combined ATI/AMD company was the 690G; a pretty basic but impressive entry into the integrated graphics market for AMD processors that offered good gaming performance while maintaining low power consumption.  Next AMD unleashed the 790FX chipset for enthusiasts aimed at the Phenom processor and multi-GPU systems – unfortunately the Phenom processor hasn’t caught on as quickly as AMD had hoped and because of that the 790FX chipset is laggard as well.

With this generation, previously known as the RS780 and now officially called the 780G chipset, AMD is upping the ante on the integrated graphics market by leap frogging the competition in many areas.  Come see why this release might have you rethinking using an integrated GPU in your next system build.

The AMD 780G pushes the boundaries of chipset performance and efficiency well beyond what competitors Intel and NVIDIA currently offer. 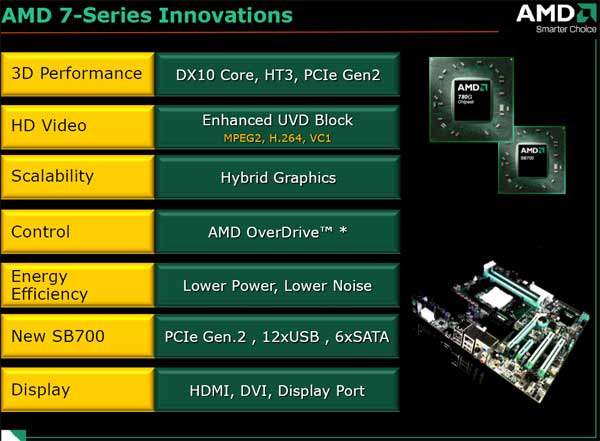 This slide outlines the main areas that AMD has upgraded or modified with the new RS780 chipset.  The integrated GPU on the north bridge is much faster than previous generations and because of that the HD video playback gets a big boost in speed as well.  AMD is also officially unveiling Hybrid CrossFire graphics, a technology I previewed late last year, and is bringing a surprising amount of overclocking options and scalability to an integrated chipset.  AMD’s chipsets have always been very power efficient and we are finally going to see the ATI SB700 south bridge!!  Finally, the IGP will support dual display outputs and motherboard vendors will be able to select from optional HDMI, DVI, DisplayPort or standard VGA connections.

There are technically going to be two different chipsets in the RS780 line; the 780G will support Hybrid CrossFire while the 780V is straight up IGP only and will run at slightly lower clock speeds.  For those interested, the graphics branding on these parts will be Radeon HD 3200 and HD 3100.