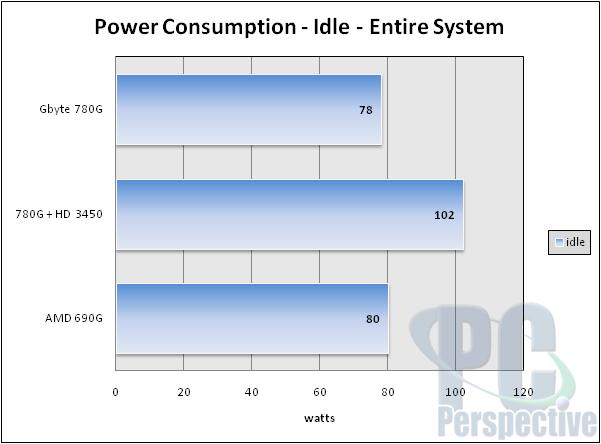 The power consumption on the AMD 780G chipset is indeed impressive; at idle the total system is drawing only 78 watts when attached to our standard testing bed.  With the hybrid graphics setup and the discrete GPU installed, the idle consumption is only increased about 24 watts.  Even when under a full gaming load, the chipset and CPU combine to draw just about 125 watts compared to the AMD 690G which pulls 146 watts.  The Hybrid CrossFire setup only pulls 6 watts more integrated only AMD 690G system.

The performance of the 780G chipset is impressive when taken at both the platform level and when looking at the integrate graphics.  The new SB700 south bridge addresses a lot of the issues that have plagued ATI chipsets throughout the last couple of years while adding in a handful of new features like better RAID support and PCI Express support.  The IGP north bridge is by far the best chipset for gaming and I have to admit I was impressed that it was able to play games like Call of Duty 4 at all, let alone at decent image quality levels.

Adding in the discrete graphics card gives users not only twice the gaming performance but also the ability to run four total monitors off an integrated system thanks to AMD’s new multi-monitor CrossFire support; it comes to the entire CrossFire lineup with the Catalyst 8.3 drivers this month.

The Gigabyte MA78GM-S2H motherboard that we tested today offered up just about everything you could want in a mATX motherboard and would be perfect for a low-end gaming system for a high end HTPC.  By offering HDMI output as well as DVI output and optical audio output, nearly all users should be able to get this motherboard to work in their TV setup in some way.  Adding in a discrete GPU for hybrid graphics will even let you play games reliably at 720p or 1080p, depending on the title, and should make for a great all purpose PC for the living room.

The motherboard and 780G chipset will also of course support all the existing Athlon X2 processors and the new X2 4850e CPU I used in my testing today.  But, don’t forget, AMD’s new quad-core Phenom processors is 100% compatible too so you can upgrade down the road or right now; it’s up to you.  The flexibility of AMD’s AM2 socket is definitely an advantage for AMD users when compared to Intel’s constant socket changes or board requirement changes.

Pricing on 780G chipset motherboards should range from $120 down to $70 or so depending on the feature set that you require for your system.  This Gigabyte MA78GM-S2H motherboard should retail for under $100 according to the data I have seen from AMD and Gigabyte.  Pairing it up with the Athlon X2 4850e, priced at $90 or so and you have a HELL of a barebones system for about $200!

AMD continues to say that 780G motherboards should be available within just a few days of the launch making this one of the first hard chipset launches in recent memory.  As always, I’ll be updating this section throughout the day and week as 780G motherboards and the AMD X2 4850e processors start showing up for sale.

The AMD 780G chipset is probably the most exciting integrated chipset launch I have covered in my 8+ years of writing about the tech industry.  This is the first time that the GPU in the chipset isn’t based on a previous generation of technology thus crippling it right from the start.  And of course, the ability to stretch that performance even further by adding in a discrete GPU and taking advantage of Hybrid CrossFire really allows system builders and DIYers to make a system for themselves or family that can actually play games for a relatively low price.  The meat of the chipset is also strong with the new SB700 picking up a lot of the slack that held back previous ATI chipsets.  If you are on the lookout for a new motherboard for an HTPC that can do some gaming as well while remaining quiet and cool, the Gigabyte MA78GM-S2H using the AMD 780G chipset is the perfect option.

Note to our readers: would you like to win your own FREE 780G chipset??