The AMD 780G got a lot of technical start from the work AMD did on the 790 chipset though the design here is completely new, built from the ground up for efficient IGP use. 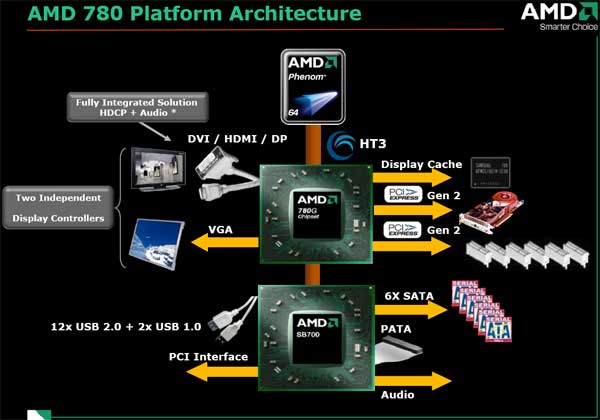 This block diagram shows the 780G north bridge paired with the SB700 south bridge and sporting a TON of features.  The north bridge is a native PCI Express 2.0 chipset that has enough lanes to power two x16 PCIe slots or one of them with a couple of expansion slots for other PCIe cards.  The chipset has full HyperTransport 3.0 support for the AMD Phenom processors and is backward compatible with Athlon X2 processors.  One unique item you’ll see above is the Display Cache option that motherboard designers can choose to add to their design – this is basically a dedicated frame buffer for the integrated GPU and can range from 32MB up to 256MB though AMD claims 32MB is really the sweet spot in the price/performance war. 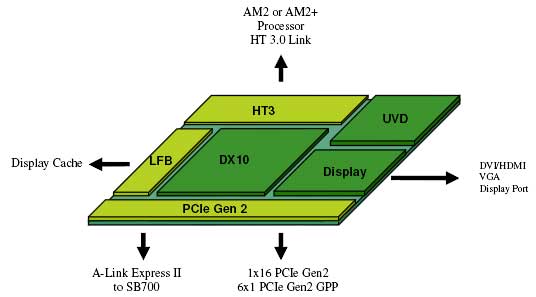 The integrated IGP on the 780G supports two independent display controllers simultaneously; though the motherboards can have more than just two display outputs as evident from our sample Gigabyte motherboard. 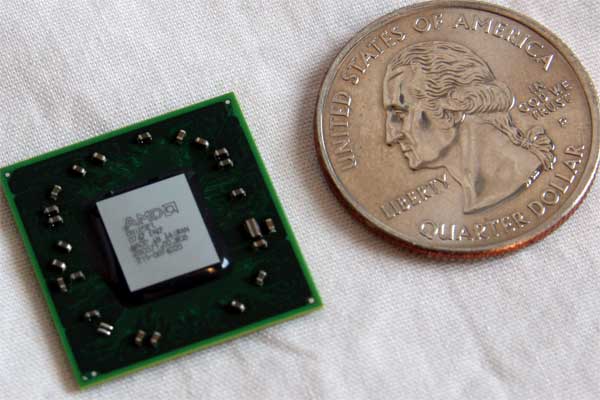 Note to our readers: would you like to win your own FREE 780G chipset??


We don’t usually rip the chipsets off our motherboards to take photos of them, so in this case AMD provided media with some samples of the chips in order to show off their small die sizes.  Built on the 55nm process technology, the first chipset to do so, the north bridge of the 780G is seen here and is indeed impressively tiny.  The north bridge will generate only about 2 watts of heat while at idle and 15 watts under load.

The much discussed but never discovered SB700 chipset is making another appearance with the 780G chipset and sports a PCIe link back to the north bridge as well as all the legacy and connectivity options that a motherboard still needs.  The SB700 supports up to 12 USB 2.0 ports, 6 SATA channels, a single IDE channel, floppy channel, HD audio and legacy PCI slots.  The one thing that that SATA ports are lacking on the SB700 is support for RAID 5, though 0, 1 and 0+1 are integrated this time around. 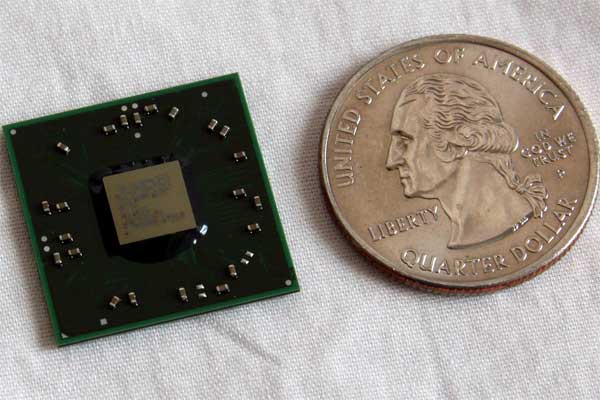 The south bridge is also a very small part and AMD claims it only dissipates about 4 watts in a typical configuration.