After testing performance and weight, it’s time to see how the ASUS notebook compares when it comes to power and battery life. 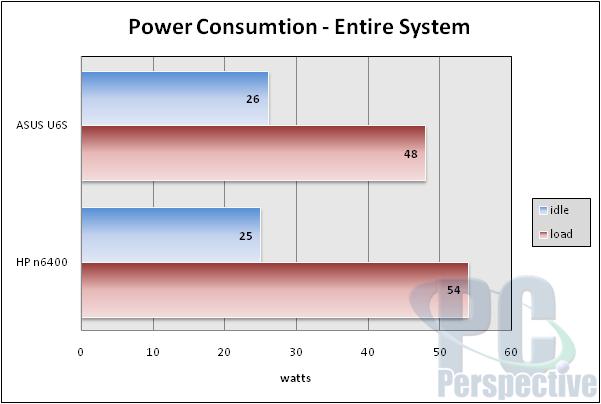 To measure power consumption, I plug the AC adapter into our trust “watts up?” device and remove the battery – obviously full power draw will be higher while the battery is charge so keep that in mind.  Our results show that even with the discrete GPU in the ASUS U6S it pull slightly less power than the HP system at full load in 3DMark06.  The idle power consumption of the two machines are nearly the same at 25 watts or so. 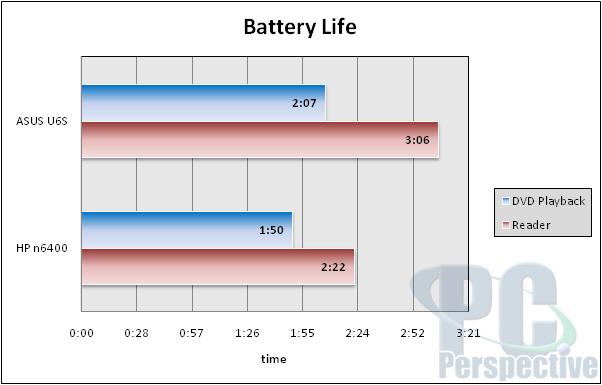 The batteries of the two notebooks are pretty similar in ratings: the U6S 6-cell batter is rated at 4800 mAH (milliAmp-hours) at 11.1V while the HP battery is rated at 5500 milliAmp-hours at 10.8V.  They weigh nearly the same as well.  However, the ASUS U6S machine walks away with the win in terms of productive time without a power connection; the ASUS machine is getting just over 2 hours while playing back a DVD while just over 3 hours when simply reading PDF documents.

Even though the U6S is able to best the HP nc6400, that’s not exactly saying much – I knew the HP machine had problems in this area for some time.  To be perfectly blunt, the battery life of the ASUS U6S is pretty disappointing considering its 12.1″ LED back-lit screen and its ultra-mobility label.  Business users would be hard pressed to get a full movie in on a plane flight and the dream of not having to take your power cord with you to meeting or conferences is pretty much shot down. 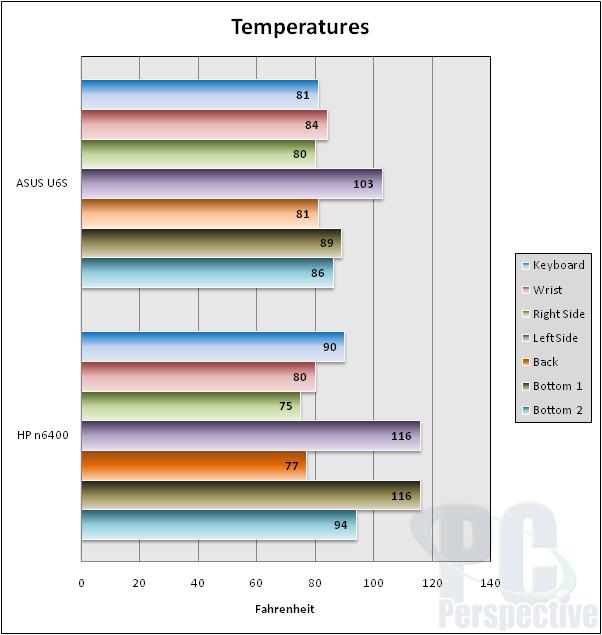 If you haven’t used a notebook computer in a while you may have forgotten the discomfort that can arise from a machine getting a little too hot while resting on your legs – or even how hot the air expelled from a machine onto your mousing hand can be.  My temperature testing is done using an IR thermometer and looks at the hottest spots on the keyboard, wrist rest, right side, left side and rear of the notebooks.  For the bottom, I simply found two of the hotter locations (usually around the hard drive or memory) and used these as well.

The ASUS U6S turned in a much better performance than the HP nc6400 with only a single area registering at over 90 degrees Fahrenheit.  The one area that did was the primary vent on the left hand side of the machine; this is good for right handed mouse users as your palms remain much cooler than those that prefer the mouse on the left.

Also, the fact that the keyboard and wrist rest areas were fairly cool is another positive for users that plan on typing on the machine for extended periods (as I am doing writing this review).

One thing that I don’t have a shiny graph for (yet) is the noise levels of the laptop computers.  While at first that might seem like a rather uninteresting thing to measure, you’d be surprised how annoying a fan can sound in an otherwise quiet kitchen or office.  In general you can relate the amount of noise a system makes to how hot it gets and thus how fast a fan must spin to keep it cool.  The ASUS U6S did a very good job in this respect and was noticeably more quiet after an hour looping 3DMark06 than the HP system was.  I don’t think anyone would have to worry about plopping down on the couch with this system while watching a movie. 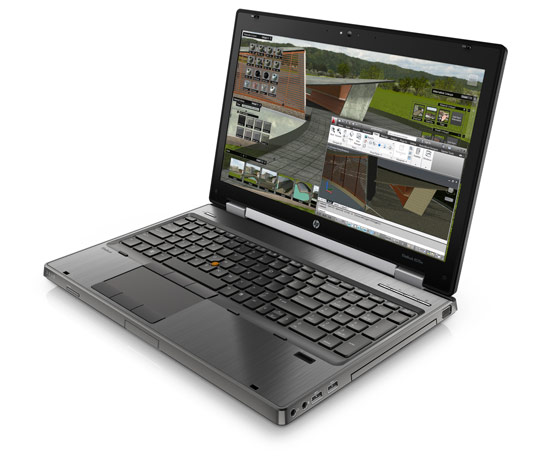