Gigabyte sent us their Intel X48 motherboards quite some time ago actually – but again Intel was asking people to hold off on selling the X48 motherboards until last month.  The X48-DQ6 motherboard follows in the spirit of the X38-DQ6, which we had previously reviewed in early October. 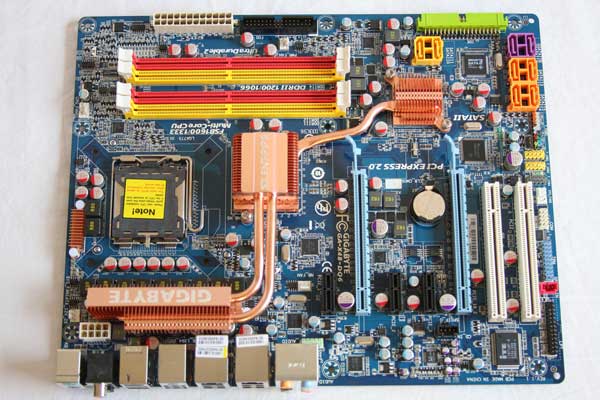 
The Gigabyte X48-DQ6 motherboard is a traditional design that is both feature rich and light on the gadgets and gizmos. 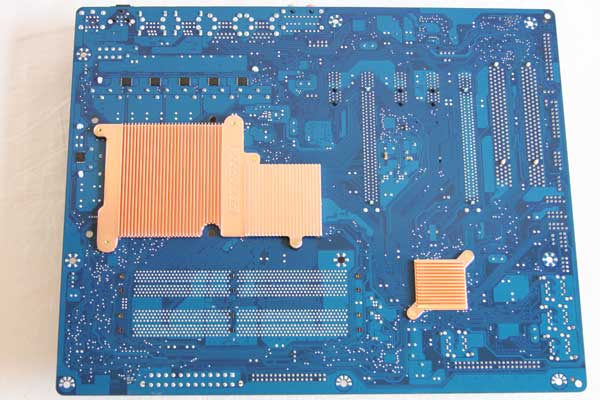 The back of the motherboard shows Gigabyte’s implementation of PCB cooling and getting the heat off the rear of the CPU and chipset. 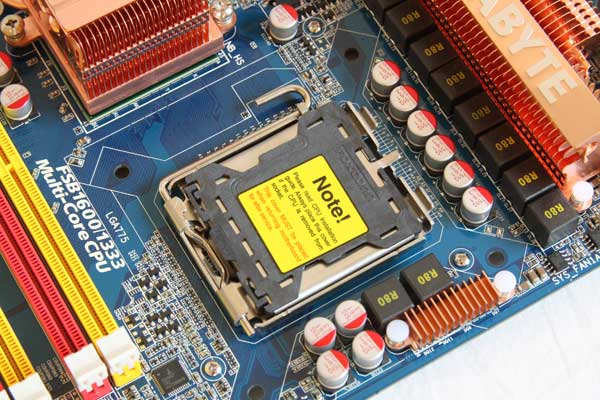 The CPU socket is fairly open with the capacitors and MOSFETs at appropriate heights and spacing to allow for most cooling options. 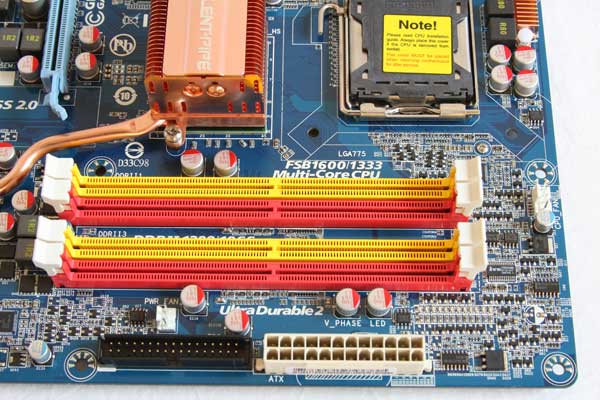 The Gigabyte X48-DQ6 motherboard uses DDR2 memory instead of DDR3 memory and this is an interesting decision by Gigabyte.  I am actually impressed that they were willing to make this choice rather than going with the traditional “higher numbers are better” mentality and instead went with the much more cost-efficient DDR2 option.

If you are looking for a DDR3 option, that is the X48T-DQ6 from Gigabyte. 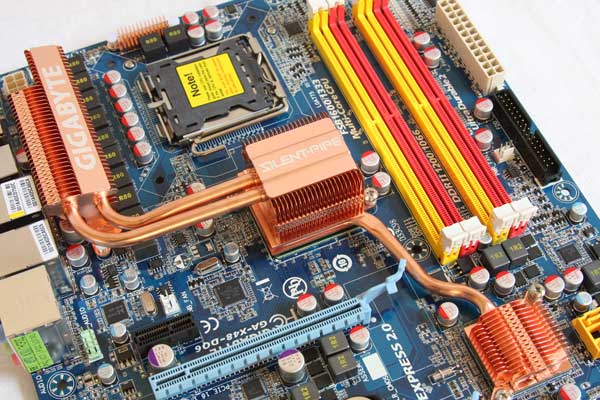 For chipset cooling Gigabyte has gone with the now mainstream heatpipe solution.  Responsible for removing the heat from the north bridge, south bridge and CPU power regulation areas, this simple design is completely passive and is actually very effective.  I would recommend that you have good airflow in your case as well as using a standard heatsink/fan combination on the processor to help move air through the fooling fins on the heatpipe for best performance.  If you decide to use water cooling that does not move air around the CPU socket of the board, a more robust air flow system in your case might be a good idea. 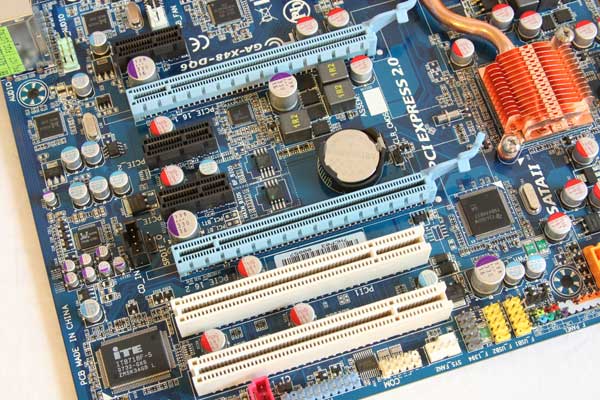 The expansion configuration on the X48-DQ6 is superb; it offers two full PCIe 2.0 x16 graphics slots, three PCIe 1.0 x1 slots and two legacy PCI slots.  What’s even better though is the layout of these options.  Even if you have two graphics cards that use dual slot coolers, you will retain a single PCI slot and two PCIe slots for expansion capability.  Too many times have we seen designs that take out all your options on this front!

On the mention of multiple graphics cards, we should note that Intel’s X38 and X48 motherboards support CrossFire on AMD GPUs only – NVIDIA still does not permit SLI on anyone’s chipsets but their own (with one minor exception). 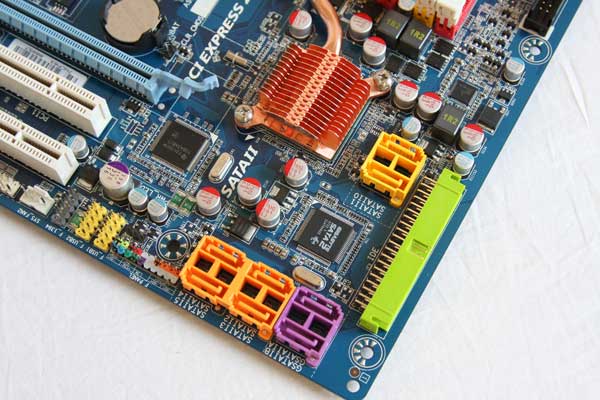 At the bottom of the motherboard we have eight total SATA connections; the six orange ones are provided by the Intel ICH9 south bridge while the two purple ones, along with the green IDE channel, are supplied by the Gigabyte branded JMicron SATA2 chip.  The placement of the ports is superb and will not be interfered with by any extra long graphics cards.

There are also headers for additional USB 2.0 and Firewire ports along the bottom of the motherboard. 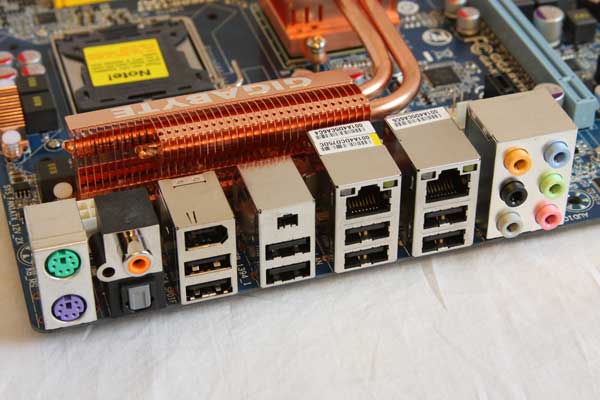 The external connectors on the Gigabyte X48-DQ6 are expansive!  There are no less than eight USB 2.0 ports right on the back of the motherboard along with two Firewire connection, two digital audio outputs, 8-channel analog audio output and dual Gigabit Ethernet ports. 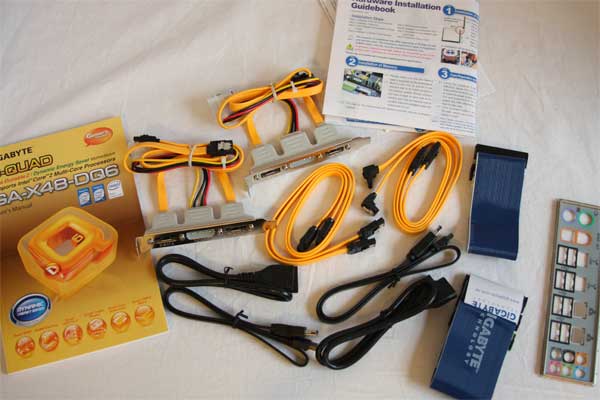 Gigabyte stuffs the X48-DQ6 box with all kinds of accessories.  There are four SATA cables along with two SATA power adapters for just about all your expansion needs as well as the single floppy and IDE cables.  They have also included two back panels that support up to four eSATA connections.