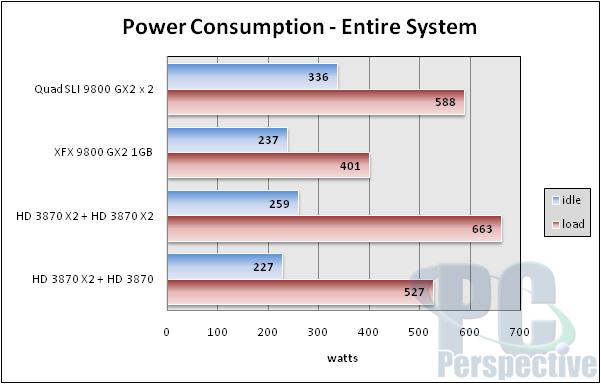 While it is not surprising that Quad SLI setup uses a lot of power, it is to see that the two HD 3870 X2 cards use much more power than the Quad SLI configuration under our full load tests.  At idle though, the AMD cards are much more efficient.

The performance of the NVIDIA GeForce 9800 GX2 card, first launched last week, was actually pretty good.  It didn’t win every gaming test hands down, but it did win enough to be called the top performing part available for those with an open budget.  We were definitely anticipating testing and playing with the first Quad SLI configuration in a couple years but after finally getting to use it, I am obviously very let down by the results that it provided.

Of all the games we tested, I’d only give a positive review of Quad SLI on Lost Planet, Crysis and maybe Bioshock; other major titles like Call of Duty 4, Call of Juarez, UT3, Company of Heroes and World in Conflict either saw performance that was barely faster than a single 9800 GX2 or in some cases Quad SLI was slower.  Maybe that extra week that NVIDIA held back Quad SLI should have been extended to get more work done on the drivers because that is quite obviously the culprit.  We already knew that programming drivers for multi-GPU configurations was hard, AMD already admitted as much in our CrossFireX preview, but rather than be open with the media NVIDIA seems to have put on a “our product is great” facade that only left a sour taste in my mouth.

It’s VERY possible that NVIDIA will address and fix some, if not all, of these games and issues in coming driver releases.  I have already heard rumors that a newer driver revision will help with a couple of titles; but we can’t review we MIGHT happen.  I can only test the hardware that is given to me with the drivers that NVIDIA sees to fit to provide.  And at this time, performance of Quad SLI is just plain bad. 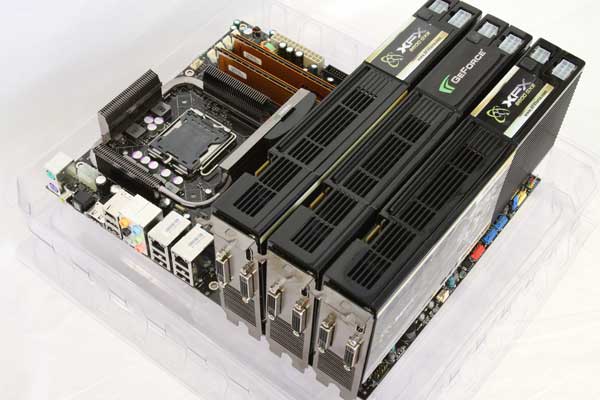 
That brings up the question: why?  Why is Quad SLI performing so poorly in all these cases?  Part of it is definitely addressable in driver fixes and software, but I can’t help but hypothesize that the G92 architecture might be partly to blame.  Looking at the 8800 GTX and 8800 Ultra of yester-year the larger 768MB memory size seemed odd at first but now appears to have been a saving grace for the architecture when running these DX9 and DX10 titles at resolutions like 2560×1600.  The G92 has a more narrow memory bus of 256-bit versus the G80 cores’ 384-bit wide bus and this is very likely another culprit.  Would upping the G92 frame buffer to 1GB address this problem??  I’m not sure, but I’d be MORE THAN WILLING to test it out.

Not only does NVIDIA’s Quad SLI technology seem like a let down in performance, it lacks many of the features that we lauded about with AMD’s CrossFireX technology.  First, users have much more flexibility with CrossFireX than with SLI – you can take your existing HD 3870 512MB card and pair it with another 3870 or an HD 3870 X2 card, essentially give you the ability to run 1- , 2-, 3- and 4-way GPU configurations expanding on existing, and reasonably priced, graphics cards.  NVIDIA’s Quad SLI is ONLY available with two $600 GeForce 9800 GX2 cards.  Would you like to take a single 9800 GX2 and add it to your 8800 GT or 8800 GTS you bought last month?  Nope, can’t do it even though NVIDIA has a 3-Way SLI technology that ONLY works with 8800 Ultra and 8800 GTS cards.

Another feature I would have liked to see with Quad SLI is the ability to use multiple monitors with your multi-card setup without having to resort to opening up your driver and turning them on or off.  AMD addressed this with their CrossFireX technology by automatically disabling the monitors when a full screen 3D application loads and returning to the previous state upon exit.  NVIDIA either can’t or didn’t include something that seems relatively simple.

First the good news: if you want to setup an NVIDIA Quad SLI solution today, you can do it.  The GeForce 9800 GX2 cards are widely available, and in just 7 short days have dropped from $599 to as low as $549 from some vendors.  This is good for new buyers, annoying for those that already shelled out the cash and interesting for those that monitor the market such as myself.  Are the 9800 GX2s not selling well?  Was there suddenly a $50 drop in cost to make the cards?  Is someone expecting something better very soon??

The bad news is that these cards will cost you $550-600 and thus getting Quad SLI will cost you about $1200.  And that new 8800 GT or GTS or 9600 GT you bought is useless in that case; yet another reason great support options like the “step up” programs from EVGA, and now BFG Tech, can be so important to enthusiasts.

UPDATE: I just saw that these cards are showing up at Newegg.com:
Final Thoughts

NVIDIA has missed the mark with their launch of Quad SLI on the 9800 GX2; an incredible single graphics card has been shoved into a technology that we all wanted to see work but that just is not yet ready for a spotlight.  With just a couple of exceptions, performance on the Quad SLI system was uninspiring and was frustrating more often than it was fun to play on.  There is potential though!  NVIDIA needs to take a tip from AMD and not just address performance scaling across more titles but integrate usability features that will help users deal with multi-GPU issues like monitor configurations.  You can be sure that I will continue to bang away on Quad SLI as the driver releases keep coming, but for now, this is something that companies like Dell and Alienware want as system pushers and anyone else should save their cash.