The 174.53 driver that we used in our initial 9800 GX2 testing and is available online for you all to use with your 9800 GX2 cards already supports Quad SLI.  Nice to have a stupid delay this time… 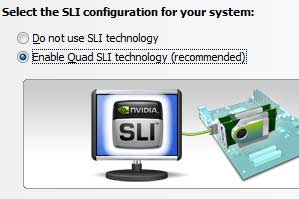 Enabling Quad SLI is just as a simple as turning a switch in the driver control panel.  Note that NVIDIA still cannot match AMD’s CrossFireX technology with the ability to automatically switch between single-display/gaming mode and the multi-display/desktop mode. 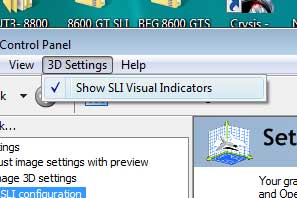 NVIDIA does still allow you to get a visual indicator of your Quad SLI performance in action with this option in the driver.

Our testing system will compare a couple of different sets of GPU configurations.  In some tests, we’ll be comparing both the single 9800 GX2 and the Quad SLI dual 9800 GX2 test beds against AMD’s CrossFireX with a 3-GPU and a 4-GPU configuration that use a single HD 3870 X2 and a standard HD 3870 512MB card and two HD 3870 X2s respectively.  You can get a lot more information on CrossFireX in our review of it here.  The other testing configuration compares the 9800 GX2s with a single HD 3870 X2 card (dual GPUs) and the NVIDIA 8800 Ultra 768MB card.