AMD’s triple-core processors are finally available to the public and are based on the B3-stepping that no longer has the dreaded TLB and performance issues. Can these sub-$200 processors convince you that three cores are better than two? When is getting that fourth core more valuable?

It was WAAAAYYYY back in September of 2007 that AMD first posted a press release about the pending release of the first triple-core processors based on the AMD Phenom brand.  Of course we all know the story about the Phenom CPU release, its TLB problem that weighed it down and the delay of the revised B3 stepping cores that fixed the major errors that we reviewed just last month.  Those steps finally out of the way AMD has given the go-ahead to release the Phenom X3 series of triple-core processors to the masses.

Is it worth making the plunge to a new Phenom X3 though?  And where does it fall in the value priced line up from AMD today?

The new AMD Phenom X3 processors that are being released today are based on the new B3 stepping of parts (8×50 models) that began shipping last month and as such will exhibit none of the well documented TLB issues the Phenom series was known for early.  Internally known as the “Toliman” core, the architecture remains largely the same as well and of course they still use the 940-pin AM2+ socket. 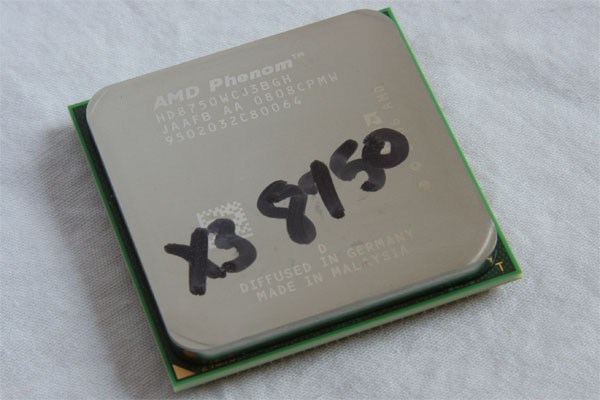 To all outward appearances the Phenom X3 series looks the same – the only change is in the model number listed on the heat spreader.  While we don’t have any direct verification on this, we are 100% certain that underneath that silver metal you would find the same exact die as the quad-core Phenom X4 9×50 processors.  Though four physical cores are present, one of them is disabled during the manufacturing process to make this a 3-core configuration.  This also means that the Phenom X3 processors have 1.5MB of L2 cache (512KB on each core) yet retain the full 2MB of L3 cache that is shared among the trio.

Why would AMD disable a core to make a triple-core part rather than a quad-core?  More than likely AMD is simply using this as a way to retain revenue from otherwise useless wafer dies.  Say a single die of four cores is tested, three of them work at 2.4 GHz while one of them only will run at 1.2 GHz or not at all, simply because of manufacturing issues that crop up.  Rather than throwing that part away AMD is now able to disable that bad section and sell it as one our reviewed Phenom X3 8750 parts.

AMD had previously released a pair of X3 processors, the 8600 and 8400, though they were only available to a few big-time OEMs that wanted to sell cheap-o AMD systems.  My guess is that not many were sold as most of us were waiting on the B3 stepping to get ironed out.  Now AMD is releasing a three-pack of triple-core processors to the channel: an 8750, 8650 and 8450.  The frequencies of these chips are listed above but the top end model, the X3 8750, runs at 2.4 GHz on a 1800 MHz / 3600 MHz northbridge clock and bus speed leaving the Phenom X4 9850 as the only official AMD part to use the faster 2000 MHz memory controller.

All three of the X3 8×50 processors launched today fall into the 95 watt TDP scale so obviously they are being forced to bin the processors to reliable reach the 2.4 GHz clock rate.  The 65nm process technology parts are using SOI technology and retain a 450 million transistor count on a 285 mm^2 die.

The latest version of CPU-Z correctly recognizes the CPU as a Phenom 8750 with all the appropriate information including the three-core configuration.

The cache tab of CPU-Z shows the Phenom X3 8750 does indeed have 3.5MB of combined L2 and L3 cache.  We were originally speculating whether AMD would need to cut out any of the L3 cache due to the loss of a single core but that was obviously not the case.