Testing the power consumption of processors usually leads us to interesting information and with the Phenom X3 8750 that was definitely the case. 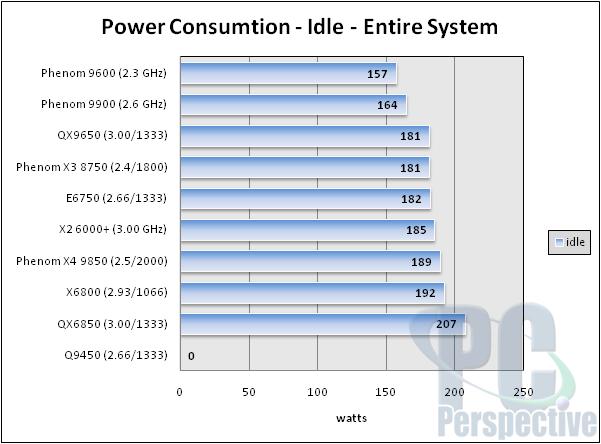 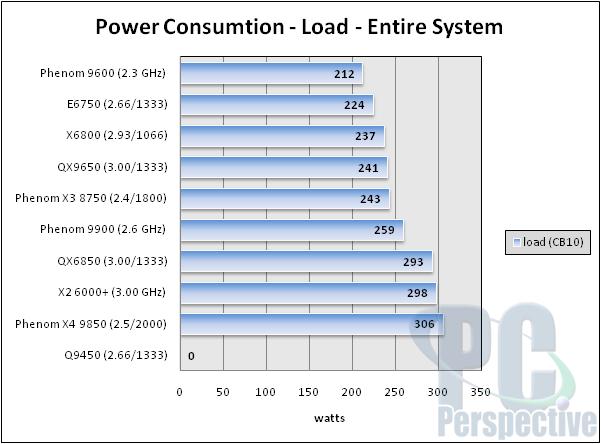 I was expecting the X3 8750 to use less power than the quad-core X4 9850 CPU but the results are better than I expected.  The new triple-core part used 8 fewer watts while at idle and 63 fewer watts when at full load.  Of course we have to balance that with the fact that performance is also less impressive on the X3 compared to the X4 – it’s all a personal preference.  I could see the X3 line making a good choice for a high performance yet lower power HTPC box.

Unlike the Phenom X4 9850 processor, the X3 CPUs are all multiplier locked; this makes overclocking the system a bit more involved as you’ll have to step up the internal bus speeds to get it right.

Able to hit 2.7 GHz without touching the voltages


Overclocking with the Phenom X3 8750 was actually quite exciting.  I was able to 2.7 GHz by bumping up the bus speed to 225 MHz without touching any other settings in the BIOS.  At frequencies over that I had to adjust the CPU voltages slightly – but the end result was a stable 2.94 GHz system that was impressive fast!  For example: at 2.974 GHz the X3 8750 received a score of 1452.02 in POV-Ray compared to the 1192.71 score at stock speeds – that is a 21% performance gain with some simple BIOS tweaks.

If the majority of X3 processors can overclock the way our sample does, the budget pricing on them will seem a whole lot cheaper; we’ll have to wait and see how the community reacts once the CPUs start reaching customer’s hands.