Just last month we were speculating that a dual-GPU graphics card like the AMD Radeon HD 3870 X2 could be coming down the pipe but using the slightly slower AMD 3850 GPU.  Turns out we were right and in fact we already have an ASUS EAH3850 X2 1GB card in house for testing: 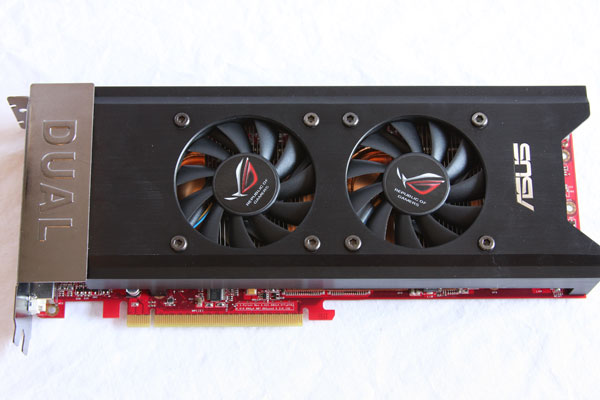 The specifications for the ASUS EAH3850 X2 1GB card should look pretty familiar: 670 MHz core clock, 830 MHz memory clock with each GPU being allocated 512MB of GDDR3 memory.  For all intents and purposes, this is EXACTLY the same design as the AMD HD 3870 X2 cards – since the single GPU HD 3870 and HD 3850 cards varied only on clock speed and memory sizes.

Unsurprisingly, this new graphics card looks a lot like the custom-built Radeon HD 3870 X2 card that ASUS released earlier in the year, though by own accounts with some mixed opinions. 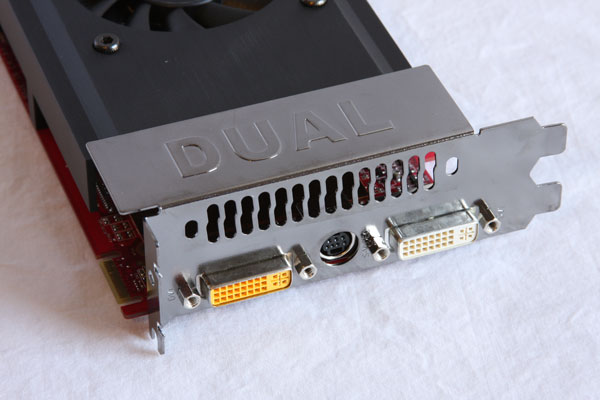 This card supports two DVI outputs and a single HDTV output.  The yellow DVI connector will allow you to output to HDMI with an included DVI-to-HDMI adapter. 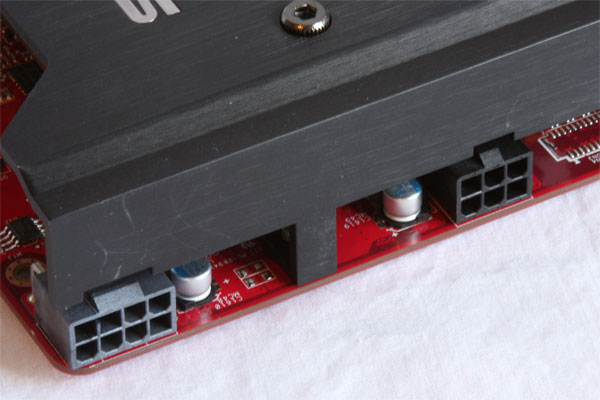 While the single HD 3850 cards only require a single 6-pin power connection this ASUS 3850 X2 card requires both a 6-pin and 8-pin connection. 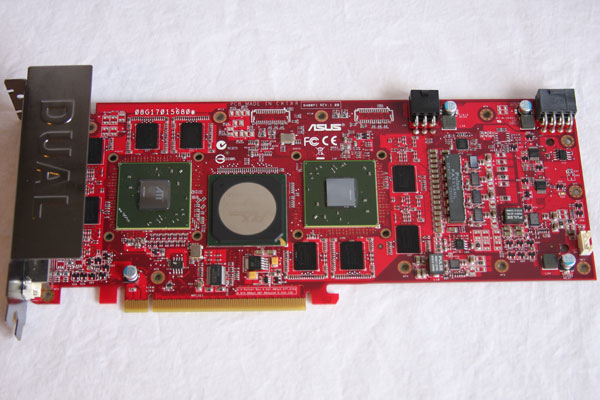 And under the fan and heatsinks we find two Radeon RV670 GPUs and a PLX PEX 8547 PCI Express switch chip.  The PEX 8547 is a 48 lane PCIe 1.0 device for chip to chip communications; we obviously know that the 3850 X2 (as well as the 3870 X2) card is a PCIe 1.0 card but in reality that isn’t making much of a difference in terms of real-world GPU performance today.

The latest version of GPUZ doesn’t quite recognize it completely, but we get the general overview pretty well.  The memory size and bandwidth are listed on a per-GPU basis; the card really does have 1GB of total frame buffer with half allocated to each GPU.  The GPU and memory clocks are running at half speed at the Windows desktop in order to save power and heat.


I ran a couple of quick tests, one of which was 3DMark06, just to get something to report and see if the card was stable.  I didn’t have any issues with the card (at least so far before our full review) and the score seen above is pretty impressive.  For comparison, a single HD 3870 card gets a score of about 10,400 while the HD 3870 X2 card pulls in 13,300 or so.


The estimated price on the ASUS EAH3850 X2 1GB card is $349 and it should be available starting sometime next week.  That price tag places the card between the HD 3870 single-GPU cards (some of which have come out with 1GB of memory as well) and the dual-GPU HD 3870 X2s.  This is indeed an area that AMD needs to address as they have no other GPU options for gamers in the $250-$350 range.  Hopefully we’ll see the HD 3850 X2 1GB models from more vendors causing a price drop closer to $300.  But for now, we are eager to get a full allotment of time with this card and report our results!  Check back soon!!

If you have comments, questions or suggestions on what to test for our full review, stop in this thread of our forums to let us know.

UPDATE: It turns out that Newegg.com is already selling these cards for the $349 price tag.