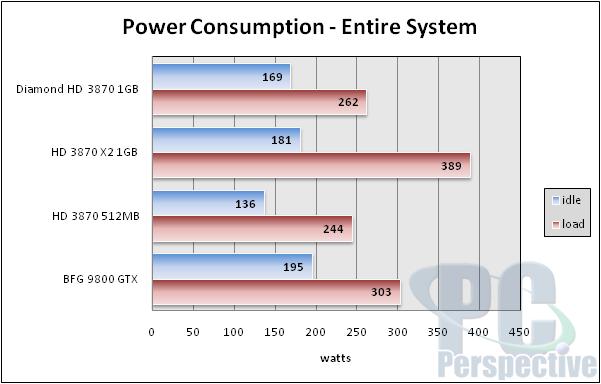 The new Diamond HD 3870 1GB model does use slightly more power than the reference 512MB version at both idle and under a full load – we pretty much expected this.  Overall power usage is still lower than that of the BFG 9800 GTX card as well and significantly lower than the dual-GPU HD 3870 X2 card.

The Diamond Radeon HD 3870 1GB card performed pretty well in our various gaming tests even though its relative results compared to our reference 512MB version of the HD 3870 weren’t nearly as impressive as we’d hoped.  In a couple of cases, mainly in Bioshock and World in Conflict, the extra frame buffer made a noticeable impact on our gaming experience and allowed us to play much more comfortably at the 1920×1200 settings than on any other single-GPU AMD graphics card.  In the rest of the titles we played through the 1GB card offered no benefits over the 512MB versions – and this was surprising in cases like Call of Juarez that are heavily dependent on memory subsystem performance.

When we compare the new Diamond 1GB HD 3870 card to the 1GB HD 3870 X2 card we see basically identical results to what we mentioned above.  The HD 3870 X2 is still the top performing AMD graphics board and its use of dual 3870 GPUs each with 512MB of memory easily outpaces the single GPU Diamond card with 1GB of memory in nearly all instances.

The NVIDIA 9800 GTX graphics card can be found for around the same price as the new Diamond HD 3870 1GB card but has many more performance advantages in our testing.  With the exceptions of Call of Juarez and World in Conflict, the BFG card is actually a better performer across the board even with just half of the total frame buffer to power it.

One thing the Diamond Radeon HD 3870 1GB card has going for it is the bevy of features that AMD saw fit to include with the GPU from the start.  This includes the ability to convert the DVI ports to HDMI outputs with the included adapter as well as natively passing audio through the HDMI port via the integrated sound codec built into the cards as well.  NVIDIA doesn’t offer this and still requires users to pass it through with a physical cable connection. 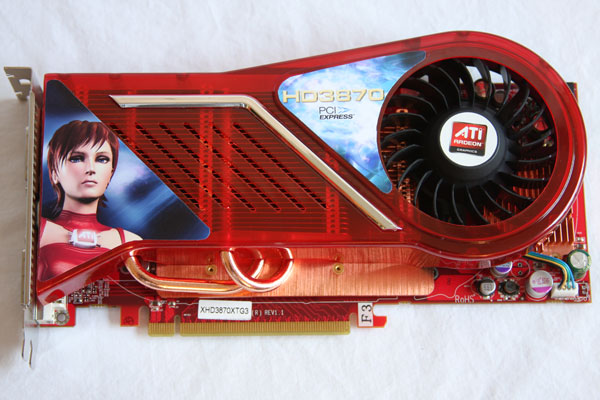 Also don’t forget that with the HD 3870 you can combine as many as FOUR of these graphics cards into your system with CrossFireX technology.  I imagine not many users will actually go through with that kind of monetary commitment on GPUs at this time but if you are wealthy and gutsy the option is there – and can be impressive!

Obviously then the Diamond HD 3870 1GB card is priced low enough compared to the X2 cards to warrant its existence but the price of the NVIDIA 9800 GTX cards is a little too close for comfort.  The performance advantages of the 9800 GTX might just push people to spend the extra cash, or even save some cash and hit up the $175 HD 3870 512MB card.

The Diamond Radeon HD 3870 1GB graphics card would make a good choice for just about any user, but it probably isn’t the best one.  The performance differences between it and the 512MB version of the same GPU that sells for much less are pretty small unless you are playing a ton of Bioshock or World in Conflict.  The NVIDIA 9800 GTX also makes choosing this card difficult since you can spend a bit more money and get some much better gaming performance in a whole host of titles.  In the end though we are thankful to see companies like Diamond taking risks like this and trying to improve and expand on AMD’s current crop of cards even if it doesn’t pan out as well as they (and we) had hoped.