Even More Benchmarks for the VT HD 3870

I am sure this one comes as a surprise to most.  Warcraft has been well known to be most definitely easy on graphics cards.  Until the release of Burning Crusades, that is.  There are several areas in WoW that are now quite tough on low end and midrange graphics cards, and can give even the high end a bit of a workout.  While the shader content is not exactly cutting edge, the amount of objects populating these new areas reaches new levels and can eat up a significant amount of performance from any video card.  Oh yes, it is also one of the most played video games in the world.  All settings were maxed with 4X AA and 16X AF enabled.  A manual runthrough was recorded with FRAPS in Terokkar Forest. 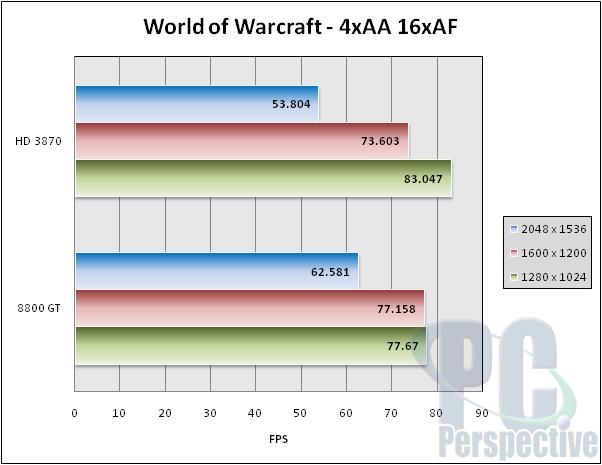 The mixed results are actually quite interesting.  At 1280×1024 the HD 3870 takes a significant lead, while at every other resolution the NVIDIA card handles it a bit better.

Though it is now two years old, this is still one of the most visually striking titles out there.  When first released it would hammer on hardware, and only now are we comfortably playing this game at the detail levels we originally craved.  Highest details where appropriate were used, with lower settings for shadow filtering, detail, and view distance.  HDR and 4X AA were enabled through the game settings and the graphics card control panels.  16X AF was also enabled on both cards.  A manual runthrough was captured with FRAPS in an area just west of the Imperial City. 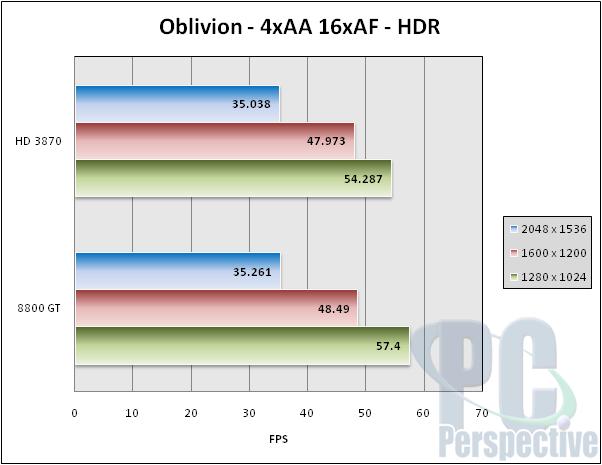 The two cards are surprisingly well matched in this application.  One would originally think that the 8800 GT would far outpace the HD 3870, especially when AA was enabled with HDR.  It seems the interplay of these settings is something the HD 3870 handles better than just AA alone.

This is another older title that is an Xbox port to the PC, and has the added utilization of DX9 functionality throughout.  It is still a good looking title with plenty of shadowing and lighting effects, as well as plenty of scene complexity throughout.  All settings are maxed out with 4X AA and 16X AF enabled.  A manual runthrough was captured with FRAPS. 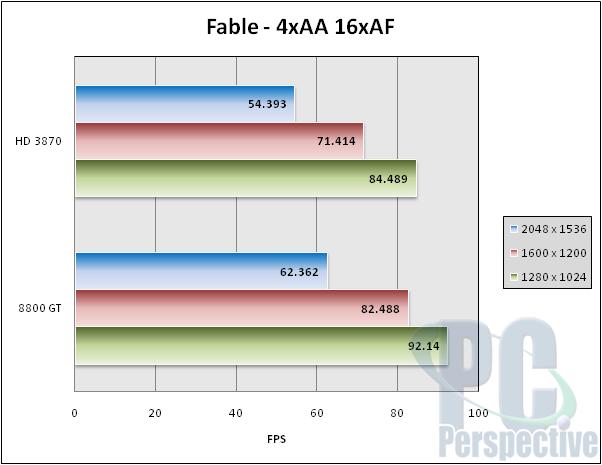 The 8800 GT again stakes out its claim to top performance in this title.  The HD 3870 still is not all that far behind though, and it certainly provides a smooth gaming experience up to the highest resolution.

The expansion/follow-up to the visually impressive Supreme Commander features a refined and expanded graphics engine which can produce more eye-catching effects as well as not bog down nearly as much when hundreds of units are represented on screen.  Settings were maxed with 4X AA and 16X AF enabled.  The built-in benchmark was used to replay a realtime battle. 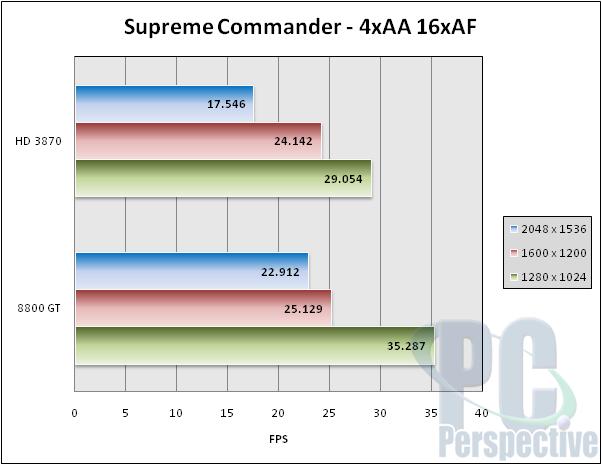 No great surprise here when the 8800 GT takes the majority of the tests.  The HD 3870 does not suffer too badly though, and at 1600 x 1200 it gives the 8800 GT a run for its money.  Actual gamplay was pleasant with both cards, but AA and some details had to be turned down or else heavy engagements would bog down.

This Unreal 3 based title has been turning heads and eating up recreation hours since it was released.  This DX10 titles features stunning visuals in a vibrant world that simply overwhelms players now and then.  All settings were maxed out with global illumination enabled in DX10 mode.  AA is disabled and 16X AF is enabled.  A manual runthrough was captured with FRAPS. 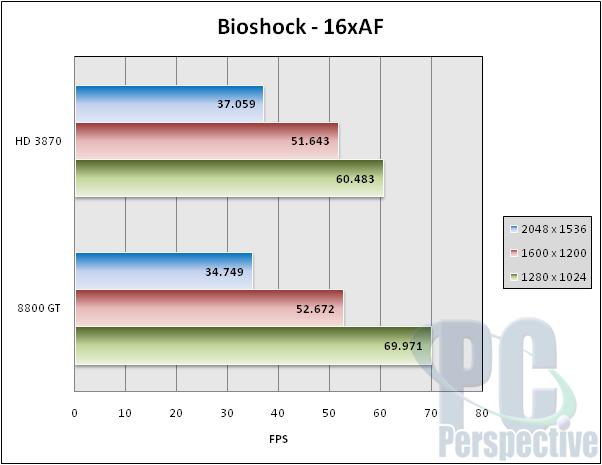 We see a rather odd occurrence here.  At low resolution the 8800 GT is the fastest, but at 1600 x 1200 they are essentially the same.  When we hit the highest resolution, the HD 3870 takes a respectable lead.