As I stated before, overclocking this card was pointless.  The currently available BIOS for this card does not allow for overclocking, and it could have negative issues with fan speed in regards to GPU temperature in some situations.  In a well ventilated case as well as sitting alone on the open testbed, I never experienced issues with heat on this card.

Compared to the older HD 2900 XT, the HD 3870 sips power and does not moonlight as a space heater.  Both the HD 3870 and 8800 GT would hit upwards of 85C under load, the HD 3870 was consistently far quieter than the 8800 GT.  At those temperatures the smaller fan on the 8800 GT would spin up to uncomfortable levels on the open testbed.  I tested power consumption using the Kil-A-Watt power meter and recorded max and min draw.

At idle the HD 3870 is pulling fewer watts than the competition, but once things heat up then they are neck and neck.  Both companies have done a nice job in cutting down the power consumption for their cards as compared to the previously released products.

VisonTek does make a pretty nice card, and their prices are not out of control.  It falls in line with most other 3870 cards on the market, and the addition of a non-standard cooling design does make it more attractive to some users.  The inability to overclock the card is a problem though.  Some enthusiasts will want to pass it by just for that reason. 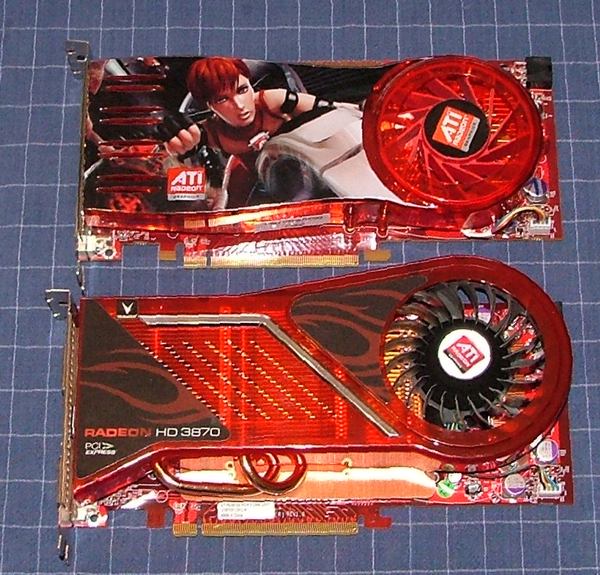 Now we can finally see what this card is like vs. the reference design.  It is a larger fan with more blades, and the heatsink is far larger.


The HD 3870 does get awfully close to NVIDIA GeForce 8800 GT performance in quite a few applications, and it does so with generally less noise.  From what I have seen, it is slightly faster than the 9600 GT in most instances.  There are a couple where the other card is faster, but once AA is disabled the HD 3870 leaps ahead of the competition.

The primary advantage the HD 3870 has over the competition is the outstanding math ability that the 320 SPs give.  In code that is exceptionally shader heavy, the HD 3870 excels.  We can see throughout testing that as resolutions climb, and the content features a lot of shaders, then the performance of the HD 3870 seems to scale a little bit better than the competition.  I would imagine in such scenarios the HD will simply kick around the 9600 GT which features “only” 64 SPs. 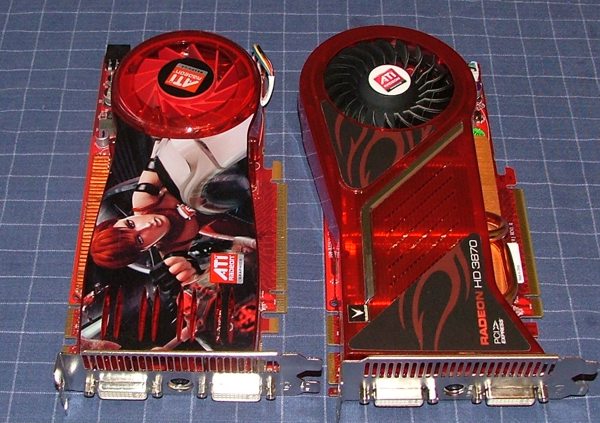 From this angle we can really see how much of a difference exists between the reference (left) and the VisionTek card (right).


The bottom line is that the HD 3870 is a very good card for a very good price.  And the rumored price drops should be going into effect pretty soon to keep the HD 3870 flying off the shelves.  These reports state that the HD 3870 should hit around $159 to $169, and considering what the user gets for that money, it is an incredible deal.  This midrange card can play all of the current games on the market at high resolutions with AA/AF enabled.  Never before in the history of gaming cards have we seen such proficient and powerful cards at these price points.  It is truly a tremendous time to upgrade if a user’s video card is of the HD 2600 or GeForce 8600 variety or below, much less if the user is running something really old like the X800 series or GeForce 7 cards.

The HD 3870 is not just a one trick pony.  It does feature the full UVD suite and video playback is impressive to say the least.  HD content looks great, and plays back without issue.  Considering how quiet this fan is on the VisionTek card, it would make a very powerful addition to the HTPC.  AMD and VisionTek have a very impressive product that should keep many a user happy and content with their video card purchase.