Timeline of Relevant Information in this Debate
July 2006 – AMD buys ATI
While at Computex in Taiwan in June of 2006, the rumors of the AMD/ATI merger were rampant though I thought most of it was simply overzealous news gathering.  However, once Intel started to discuss the possibility of a combined AMD/ATI entity, we took note and sure enough the deal went through.  What at first seemed to be a merging of two poorly performing companies struggling for a way to survive the move has quickly become one of the most important relationships in the future of computing.

Sept 2006 – Intel shows off Terascale for the first time
While the idea of graphics working on Intel’s Terascale project wasn’t a focus at the time, Intel’s first demonstration of an 80-core processor was the first step in their public demonstrations of highly parallel computing.

Nov 2006 – AMD discusses Fusion plans
Not long after the merger of AMD and ATI was finalized, the new company began to tout its plans for the future of computing revolving around an idea called “Fusion”.  What essentially boiled down to combining a high-end processor with an integrated graphics core is a progression in the move to a single, monolithic chip with similar benefits to adding the PC’s memory controller to the processor.

April 2007 – Intel Larrabee hinted at GPU
Intel first started discussing the Larrabee architecture as a graphical computing product early in 2007 though analysts and editors such as ourselves were obviously thinking this route to begin with.  Not just focusing on gaming, however, is one of Intel’s keys to seeing early success with the product.

Sept 2007 – Intel buys Havok
The first sign that Intel is serious about the future of gaming on its hardware was this purchase of the dominate physics API for both PC and console games.

Jan 2008 – AMD backs up on Fusion plans slightly
AMD’s plans for Fusion were pushed back a bit for reasons that the company has never really clarified.  My speculation is that both process technology hiccups and improved performance in IGP-based chipsets were a factor.

We would be remiss if the first thing we mentioned about AMD’s current status in the market was a very poor financial outlook.  The company has been bleeding money for a couple of years now and though Hector Ruiz, current CEO, has promised investors that the company would be profitable by Q3 of 2008 I wouldn’t bet my mortgage on it quite yet.  AMD has talked about going “fab light” in a way that would help alleviate some of the costs of chip production and some rumors are even circulating that AMD would consider splitting the chip design and chip product facilities completely.  In early April the company announced that it was going to be cutting 10% of its workforce in order to help meet financial goals.  Phil Hester and Bob Brewer, former AMD CTO and VP of Strategic Marketing respectively, have stepped down in the last week as well putting another negative spin on the company’s future.  Obviously this is a company with quite a bit of internal turmoil and a significant lack of investor trust. 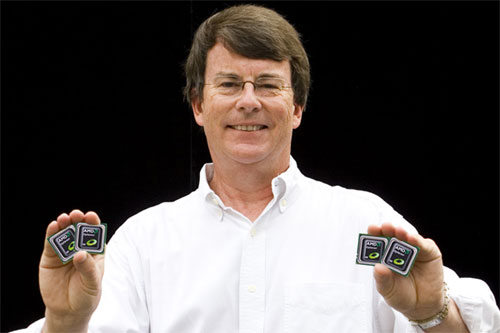 Former AMD CTO Phil Hester, one casualty of the war


If we step away from personnel and finances and just look at products, AMD isn’t doing that bad.  From a graphics perspective AMD currently has its best lineup of products in 24 months or more with the RV670-based designs of the Radeon HD 3000-series GPUs remaining competitive with solutions from NVIDIA.  The HD Radeon 2000-series of cards was a big letdown for AMD both in terms of technology and sales since gamers and system builders were hesitant to include such a power hungry solution in their computers that didn’t even best NVIDIA’s much older G80 architecture.  The Radeon HD 3000-series parts are very similar to those 2000-series parts but a move to a smaller 55nm process technology and some tweaks in the design allowed AMD to move into a much better power/performance envelope.  AMD still can’t claim the performance lead over NVIDIA, but the current line of GPUs is strong. 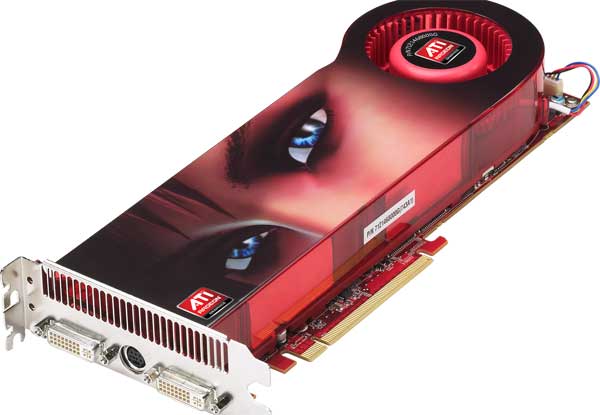 
While the world of AMD GPUs has been on the upswing over the last two years, the same cannot be said of AMD’s CPU division.  While the success of the original Athlon, Athlon X2 and Opteron processors were stunning, which allowing AMD to increase market share across the board in desktop and server environments, the reception to the Barcelona core processors has been mediocre at best.  AMD is currently unable to get clock rates on the K10 design high enough to compete with top Intel processors and the initial launch of the Phenom and Opteron (Barcelona core) processors was muted by an overly publicized TLB erratum.  While the bug was definitely an issue for enterprise customers it was never shown to be a problem with consumer level products in the wild, but Phenom suffered for it anyway.  Thankfully the revised B3 stepping of both Phenom and Opteron processors are shipping giving AMD a “fixed” CPU for the first time since K10’s release.  In both desktop and server environments the parts are priced competitively to compete with Intel’s CPUs and while they can’t claim to have the performance lead, just as with their current GPUs, Phenom and Opteron are worthy rivals to Xeon and Core 2. 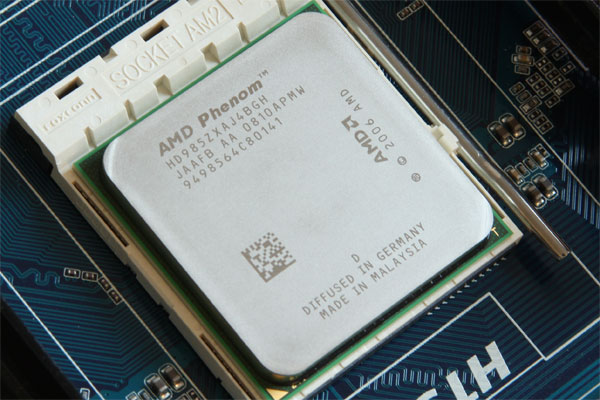