Running Hybrid SLI and Hybrid Power is as easy as installing the correct chipset driver and display driver in your system.  The software to switch between power configurations will be automatically enabled when the system detects both a compatible chipset and graphics card in the system. 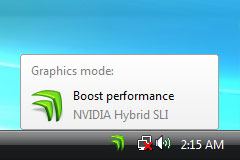 Upon rebooting after installing the driver I was met with this notice: we are in Boost Performance mode which means the discrete GPU is powered up and running.  This is the mode you’ll want to use for gaming. 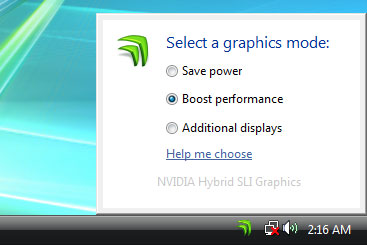 You can change between the three available Hybrid Power modes by using the NVIDIA icon in your taskbar very easily, and without the need to reboot.  The “save power” mode does just what you think it would – disables and powers down the discrete GPUs and runs solely off the integrated graphics of the 780a SLI chipset.  The “additional displays” mode enables both the mGPU and dGPU to allow you to utilize monitors off of both of them. 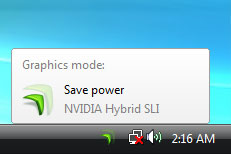 Here we are in “save power” mode and you can see half of the NVIDIA icon is grayed out to indicate the status change. 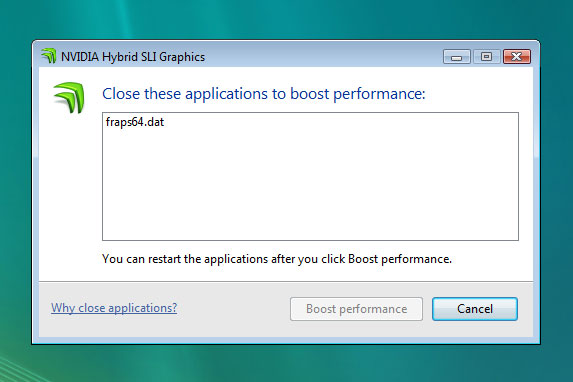 The only hiccup comes when you are running 3D applications and want to switch between modes.  Anything like that will have to be closed before the transition can take place – here I had Fraps up and running when trying to switch between from “save power” to “boost performance” mode.

I do have to say I was impressed that NVIDIA was able to get this transition working without a need to reboot the system.  Considering that ATI beat them to the punch on switching between CrossFire/standard modes as well as supporting multiple monitors in multi-GPU mode (which NVIDIA still doesn’t support) this is a good “first” for NVIDIA’s driver team.

Putting Hybrid Power to the Test


First in our series of Hybrid SLI tests is to see how the “passing through” of the graphics data from the primary rendering discrete GPU to the integrated GPU affects overall gaming performance.  For this test I played through Call of Duty 4, Crysis and World in Conflict several times in both configurations and saved the playback data using Fraps. 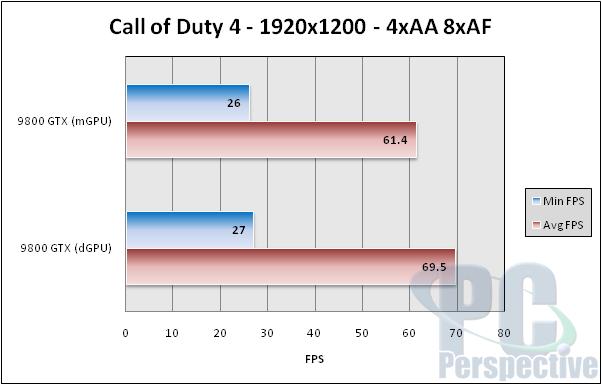 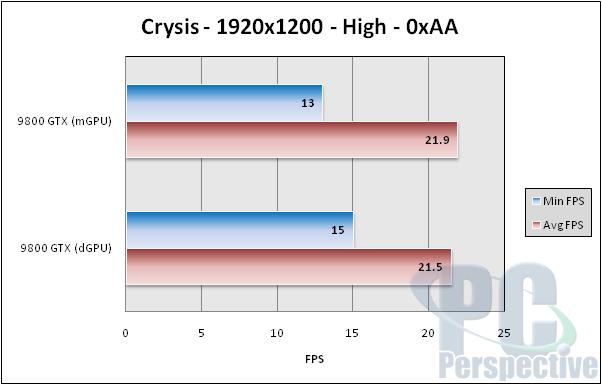 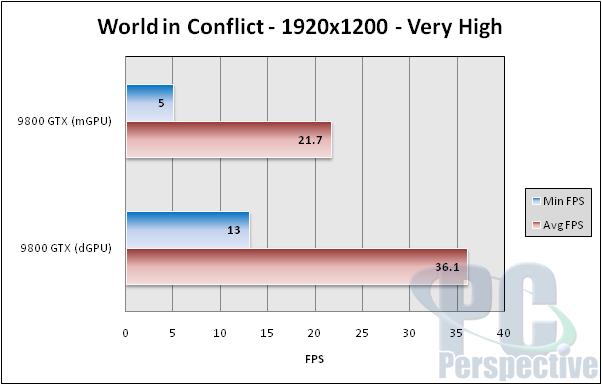 Our results here aren’t incredibly impressive – in Call of Duty 4 we saw a noticeable drop in our average frame rate though the performance was still more than acceptable at the 1920×1200 resolution.  Crysis performance is nearly identical but World in Conflict saw a VERY big drop in performance.  The question is why?   While NVIDIA isn’t saying exactly my guess is that because WiC is incredibly CPU bound at any resolution, the amount of processing required for the mGPU to accept the frame buffer output, store it and then display it is bringing about these adverse effects.

**UPDATE 5/8/08**  At the request and repeated insistence of NVIDIA, we decided to retest our performance results above; NVIDIA said they had seen no problems with the Hybrid Power over the mGPU as dramatic as we saw here.  We retested all three titles at got some slightly different results; at least on the one title that stood out: 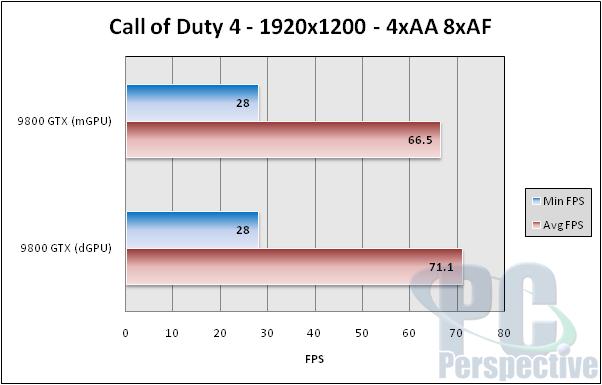 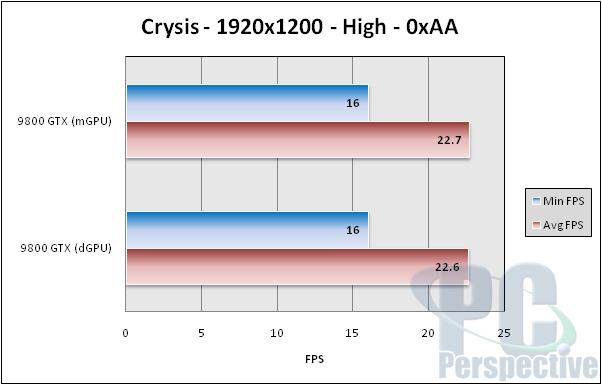 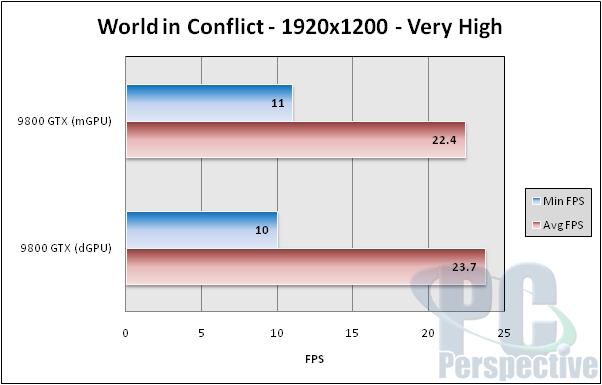 From these results you can see that Crysis and Call of Duty performance remained the same as in our original tests posted on launch day.  The World in Conflict results show a dramatic change though – rather than have a 50% decrement in performance going from having the monitor connected to the discrete GPU to having the monitor connected on the integrated GPU we saw performance nearly identical in both situations.  It turns out that the root of our problem was with the WiC 1.0.0.7 patch and how it handles resolution changes and really had nothing to do with NVIDIA’s Hybrid Power implementation at all.

Our apologies to our readers for the mix up, but we are glad to have the actual results seen above.


What about NVIDIA’s claims of amazing power savings?  Does that pan out as advertised? 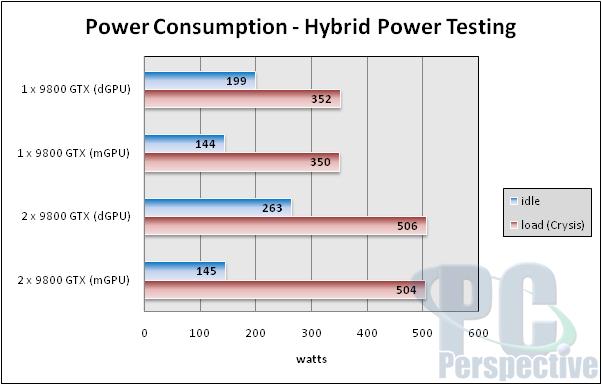 This time NVIDIA is able to deliver: by enabling power savings in the Hybrid SLI driver the discrete graphics cards are essential hidden from the power supply.  With a single 9800 GTX installed we saw an idle power consumption of 199 watts when Hybrid Power was disabled though when we enabled it with the monitor connected to the integrated graphics idle power was only 144 watts – that’s a 55w (or 38%) drop.

Overall, my experiences with Hybrid Power on the nForce 780a SLI chipset are positive.  The performance differences between having the monitor connected to the discrete graphics card and the integrated mGPU were slightly upsetting but the power savings from the technology are incredibly impressive.  I could easily see this being something I would integrate into my personal box – using 55 watts less power (and heat) in the summer months while just doing standard computing would be a welcome change.

Look at all the colours!