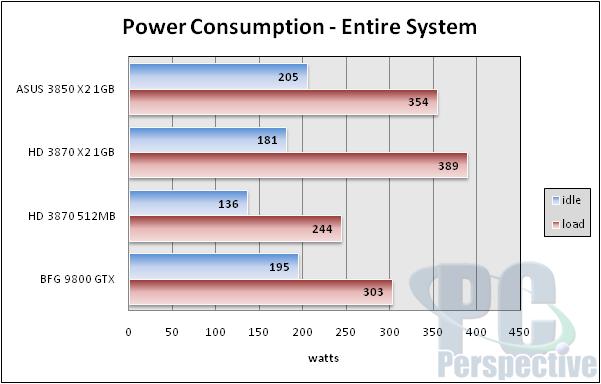 The power consumption of the custom built ASUS EAH3850 X2 graphics card turns out to be pretty good.  Even though the idle power consumption of the lower performing HD 3850 X2 is higher than the idle power of the HD 3870 X2, we can probably account this to the custom design that ASUS has done with AMD’s products.  AMD obviously had more time and engineers working on that very specific problem that ASUS either didn’t have time for or didn’t bother to worry about.  At load power consumption though, the HD 3850 X2 uses less power than the HD 3870 X2, as we expected; the difference is 35 watts or about 10% lower than the Radeon HD 3870 X2.

Looking at the competition from NVIDIA’s 9800 GTX card, the HD 3850 X2 card from ASUS is significantly lower – and again we expected this.  A single GPU that has similar performance to a dual-GPU card should be more power efficient.

The ASUS EAH3850X2 1GB graphics card performs much better than expected and considering the cards we were comparing it to, and should easily find a home in many enthusiasts’ PCs.  When we compare the ASUS HD 3850 X2 1GB card to its neighbors from AMD’s own line of GPUs, it rests between the higher performing Radeon HD 3870 X2 card and the lower performing Radeon HD 3870 512MB card.  The HD 3850 X2 and HD 3870 X2 cards (from ASUS or other vendors) are basically the same underlying technology – two RV670 GPU cores on a single PCB with a PCI Express bridge between them to offer CrossFire performance with a single card.  The only differences are the clock speeds of the GPUs and on-board memory that give the HD 3870 X2 its higher positioning in AMD’s product stack.

Because of these similarities the two products perform just as you’d expect – the ASUS HD 3850 X2 1GB card has an incremental performance drop in relation to the clock speed differences.  The single GPU Radeon HD 3870 512MB card doesn’t fare nearly as well and is in fact just about totally demolished by the ASUS HD 3850 X2 card.  At the beginning of the review I was saying that it was a big positive for AMD to get a product in the stack between the single-GPU HD 3870 512MB and the dual-GPU HD 3870 X2 1GB but it turns out rather than lying in the middle the HD 3850 X2 is really much closer to the 3870 X2 overall.

This doesn’t make the card any worse off, it just means that AMD’s pricing and product line doesn’t get as big a lift as we were hoping. 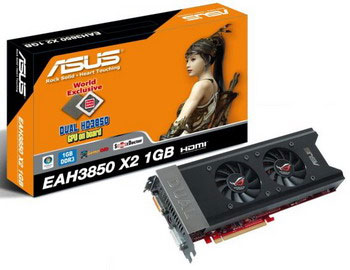 I mentioned earlier that as for NVIDIA competition the new GeForce 9800 GTX was the most likely candidate in terms of pricing.  As it worked out it and the new ASUS HD 3850 X2 card are actually pretty tight in performance as well – which was of course the goal from ASUS and AMD.  There are still some games where NVIDIA’s GPU is better (Call of Duty 4, Company of Heroes) but there are just as many where the ASUS 3850 X2 wins instead (Bioshock, Call of Juarez) and the rest are pretty much ties.

To paraphrase from previous discussions: One thing the ASUS Radeon HD 3850 X2 1GB card has going for it is the bevy of features that AMD saw fit to include with the GPU from the start.  This includes the ability to convert the DVI ports to HDMI outputs with the included adapter as well as natively passing through the HDMI port via the integrated sound codec built into the cards as well.  doesn’t offer this and still requires users to pass it through with a physical cable connection.

Also don’t forget that with the HD 3850 X2 you can combine more graphics cards into your system with CrossFireX technology.  This could be pairing this ASUS model with another of the same, another HD 3870 X2 or up to two single-GPU 3870/3850 cards.  I imagine not many users will actually go through with that kind of monetary commitment on GPUs at this time but if you are wealthy and gutsy the option is there – and can be impressive!

As of this writing the ASUS EAH3850X2 card is already available online for a price of $315 with a $30 mail-in rebate.  You can find basic reference design Radeon HD 3870 X2 cards online for about $400 or so – cheaper if you hunt around a bit.  The bad news might be that you can find some GeForce 9800 GTX cards for sale below $275 as of today and that price should be falling in the weeks ahead.

The pricing structure of the ASUS HD 3850 X2 card tells me that it needs to come down – but just a bit – to really be a hot seller.  If we could get this card in the same price range as the lower end of the 9800 GTX spectrum there is no doubt that the enthusiast fan base would eat it up and users that might have already invested in a single HD 3850 or HD 3870 card would have another reason to try out the world of CrossFireX.

The ASUS Radeon HD 3850 X2 1GB turned out to be a surprisingly competent graphics card that augments the gaping hole between the HD 3870 X2 and the HD 3870 in the product stack.  ASUS is the only card vendor currently selling this product design and its likely they will remain so as the life span of the RV670 creeps along.  But with the aggressive pricing ASUS has put on the product (that hopefully becomes MORE aggressive) the 9800 GTX from NVIDIA has a new, and very competent, competitor.  If ASUS and AMD can get the word about this custom ASUS-built Radeon HD 3850 X2 it might breathe new life into AMD’s GPUs this spring.