While we are very used to seeing bickering between companies like NVIDIA and ATI, AMD and Intel and Microsoft and Sony, one segment of the PC market that has been surprisingly quiet over the years has been the manufacturing vendors like MSI, ASUS and Gigabyte.  Well that all seems to be behind us now as a “day time melo-drama” of sorts has broken out between two companies that were at one point last on the brink of merging.

Some time earlier this month Gigabyte held an event in Taiwan (that we were not privy too) that invited some international press to the Gigabyte offices for a technology preview.  Gigabyte used this time to demonstrate their new line of motherboards based around the P45 chipset, their power savings and their overclocking abilities.  Geoff over at the Tech Report had a very good write up of the event from a technical perspective; something we wish there were more of in this story.

Gigabyte apparently also took this opportunity to hit on some issues they have with ASUS’ marketing and products; after all with a room full of attentive press that you have spent thousands of dollars gathering, why not?  This article over at TGDaily goes into the detail that Gigabyte’s presentation provided, basically calling out ASUS for lying about their power savings technology and showing how Gigabyte’s was superior.  Gigabyte also claimed that ASUS was lying about using Japanese capacitors among other things. 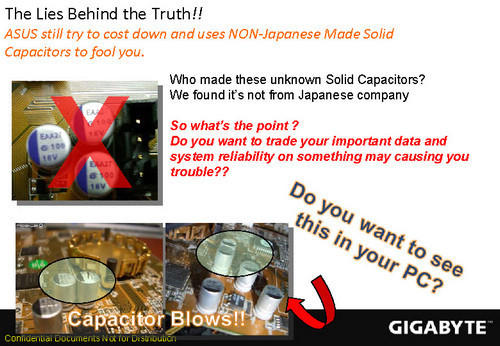 
The next part of the story is like an incredibly nerdy version of The Bourne Conspiracy.  As I have heard it: an editor from a major online review site left the Gigabyte after-hours party to go to the ASUS offices and meet with ASUS personnel.  Other than that, there a bunch of rumors of the editor taking Gigabyte products to ASUS, telling ASUS all about the information that Gigabyte was presenting and of the accusations they were making.  Gigabyte was acceptably upset about the implied problems since they paid for this editor to come over to Taiwan in the first place.  I won’t get into the ethics of any complaints any deeper than that; just judge it as you see.

Now is where it gets fun: both Gigabyte and ASUS are apparently getting lawyers involved in all of this.  Gigabyte is upset that ASUS would “lure” a journalist from their event with the purpose of industrial espionage and they are also considering action against the website in question for their actions.  ASUS is also throwing some starving lawyers some cash complaining that Gigabyte was slandering them at the event in Taiwan and that the websites reporting that information are also at fault.  ASUS has gone as far as to post an “official statement” about it on their site:

It has come to our attention that a certain Taiwanese Motherboard Manufacturer has made false claims against ASUS motherboards. These claims have given rise to false information being communicated in both the mainstream media and technology channels. ASUS wishes to clarify the issues and so avoid any further confusion.

After investigation, it is clear that this company in question made use of a sponsored gathering of local and international media to deliberately spread information that we consider both untrue and without credible verification. This “disinformation” is not only extremely damaging to ASUS but also completely misleading to the consumers.

ASUS reserves the right to take legal action against any individual, organization or corporation which creates or spreads such rumors.

First, let me say that is ALL pretty ridiculous from an outsider’s perspective.  Gigabyte’s claims are pretty much without merit against ASUS since the journalist left willingly from the Gigabyte event; if anything Gigabyte simply needs to make their own internal recourse against that publication as they see fit.  ASUS’ claims of being slandered are more approachable if they could somehow prove what Gigabyte said and showed at the event (which seems likely since we have already seen these slides).  ASUS’ move to get the websites involved in the legal action simply for “spreading such rumors” is a REALLY bad move and will do nothing to improve ASUS’ image with the online community that has supported it for years.  To think they would actually attempt to sue “site X” for reporting on what data they were shown takes us down a very messy path indeed.

As for the source of all this bickering – the power savings that each motherboard manufacturer actually provides compared to the competition, well that is TBD.  Since I haven’t spent enough time with ASUS’ EPU product yet, implemented on their upcoming P5Q series of motherboards, I’ll have to reserve a technical judgment for later.  But let me say this: motherboard vendors are obviously stretching for a way to market themselves if they are reaching this far into the bag of tricks.  How much do users value the savings of a handful of watts of power while their system is idle?  My guess is less than either ASUS or Gigabyte would like to admit but we’ll soon see for sure once I have put both platforms through the wringer.

In the end, this powder-puff battle between Gigabyte and ASUS will hopefully blow over soon or both sides will find a significant drop in enthusiast support I’m afraid.  And this is why avoid those soap operas…

A Radeon a LANParty 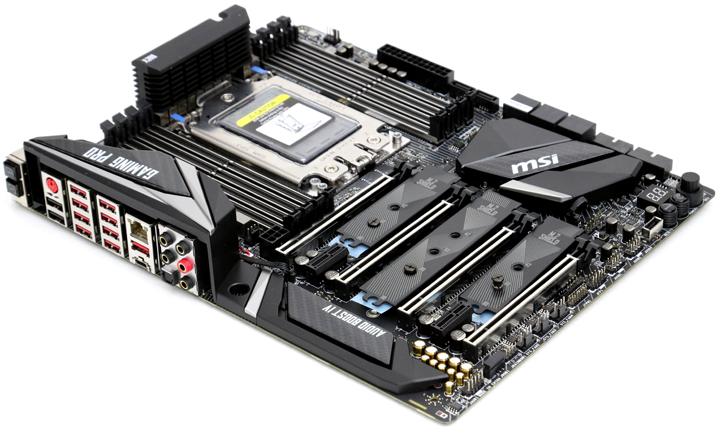