After first getting information on NVIDIA’s acquisition of RaySpace earlier today, we have some more fantastic news for NVIDIA GPU users and fans of the Folding@Home project. 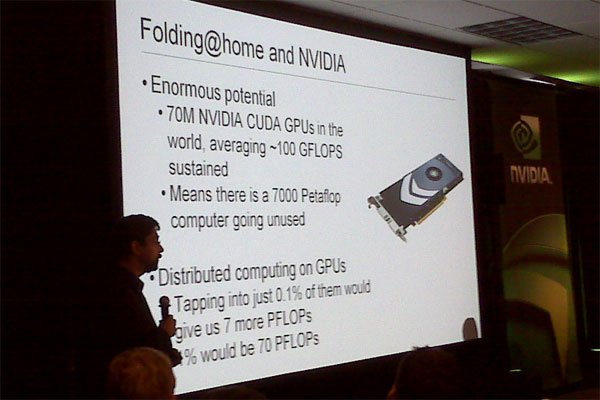 Yes, it’s finally coming – the NVIDIA GPU client we have all wanted since first seeing and tasting the power of the ATI GPU Folding@Home client.


Vijay Pande, the man behind the Folding@Home project, was on hand to demonstrate the first showing of the NVIDIA GPU client. 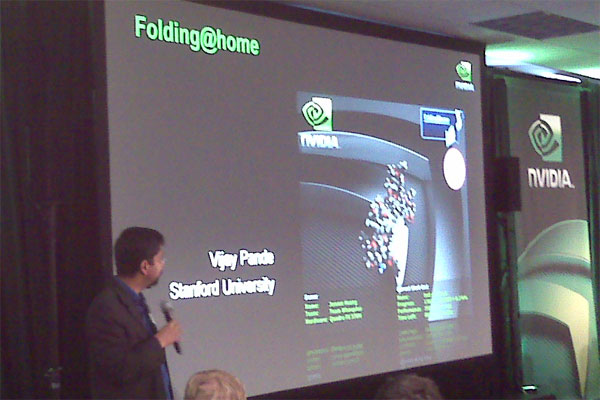 Apparently we aren’t allowed to talk about specifics on performance of the client, mostly because the numbers we saw were based on an “upcoming NVIDIA GPU”.  I don’t think I’ll be spoiling anything by saying the new GPU was incredibly fast and the upcoming GPU will be faster than any Folding client today including the PS3; you will be impressed.

Regardless, the fact that NVIDIA is finally joining the Folding@Home community is great news – especially for our own PC Perspective Folding Frogs team!  Vijay also discussed the creation of the OpenMM, a platform API that will be used to allow other molecular calculations be easily distributed to various computers and will have integrated support for both NVIDIA and AMD GPUs as well as modern CPUs.

If you want more information on the Folding@Home project, a stop by our Distributed Computing forum should have all the answers you need.