AMD launched the GAME! initiative this week as an attempt to show how AMD-branded hardware can set a standard for the PC gaming platform and bring better PC gaming to the mainstream, non-enthusiast community that might not know about different hardware components. But can an AMD-created standard live up to those goals?

Late last week AMD met with some in the media to discuss a new initiative they are starting with the world of PC gaming.  You may have heard or been to the Game.Amd.com website that acts as a portal of sorts for new gaming content, gaming news and of course, AMD gaming hardware in the form of CPUs and GPUs.

AMD started off the discussion by countering the popular theory that PC gaming is on a downturn and that consoles are in fact the death kneel of the industry. 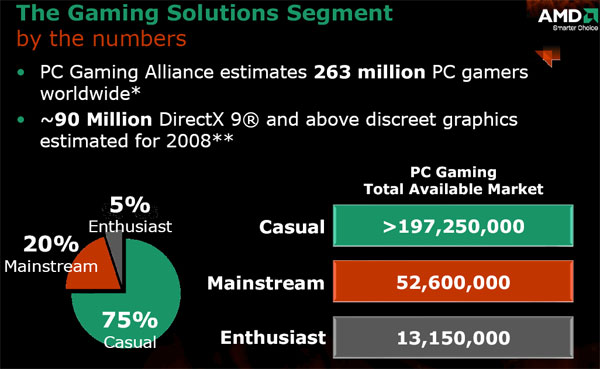 This slide breaks up the PC gaming market that continues to grow according to numbers provided by a DFC Intelligence report, into three different segments.  The “Enthusiast” segment is the one we are all familiar with and probably a part of: those that see games like UT3 and Crysis and must-own titles while playing Lost Planet or Company of Heroes on a regular basis.  The problem for AMD (and NVIDIA for that matter) is that this segment has been stagnant for a while; it is the “Mainstream” and “Casual” gamers segments that dominate the total market and are growing.

The goal for AMD with the new GAME! initiative is pretty simple: make it easier for PC gamers to buy a system or components that will competently play most modern titles at reasonable quality levels and frame rates. 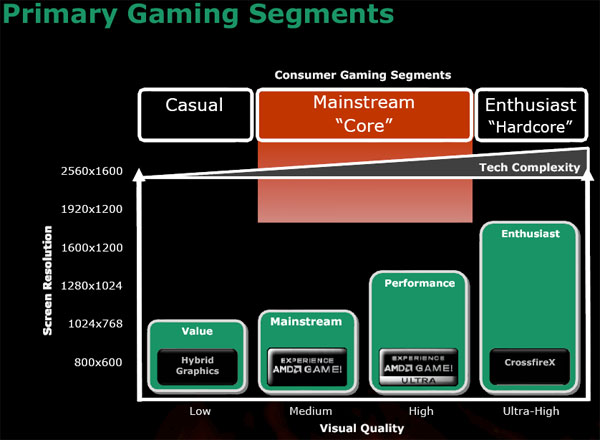 AMD already thinks that the “Enthusiast” segment is saturated and doesn’t need the assistance that the “Mainstream” gamers require to really adopt higher end gaming hardware.  The problem is, as we have well known for a long time, is that PC gaming hardware can be a much more complex problem when compared to the simplicity of console gaming.  It is this middle segment that the AMD GAME! initiative hopes to address with a couple of pseudo-standards to point potential gamers in the right direction.

In order to provide a simple, logo based answer to the question “is this hardware good enough?” AMD will be testing hardware from their platforms to see which of their components meets their predefined quality levels.  The AMD GAME! initiative also makes a play at the “balanced PC” approach that NVIDIA has been touting recently to get a good CPU, chipset and GPU in your gaming machine.

Along with the new AMD GAME! initiative come a pair of new logos to be on the lookout for: one will signify that you are buying a complete AMD GAME! compatible system while the AMD GAME! Ready logo (above) will be placed on compatible components to indicate that purchase these and building a system using it will allow you to meet AMD’s minimum requirements for a GAME! Ready system. 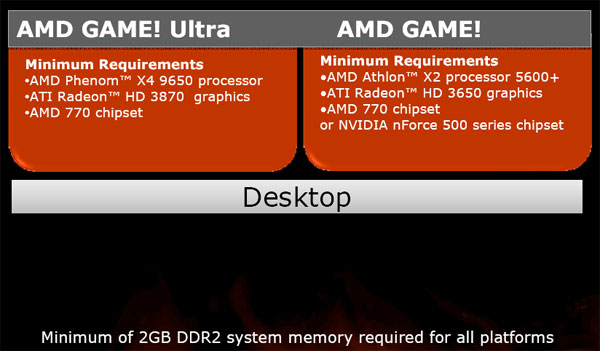 As of today there are two standards by which AMD will be promoting AMD GAME! systems: AMD GAME! Ultra and AMD GAME!  As you might guess the Ultra platform is more powerful and features an AMD Phenom quad-core processor, a Radeon HD 3870 GPU and an AMD 770 chipset motherboard.  The lower-end AMD GAME! system only requires an Athlon X2 5600+ CPU, Radeon HD 3650 graphics and allows for either an AMD 770 chipset or NVIDIA nForce 500 series chipset.  Both desktop platforms require at least 2GB of system memory as well.

The specifications on these two platforms are actually very reasonable and the GAME Ultra! setup is not unlike our selections in the Mid-Range System on our Hardware Leaderboard.  It is nice to see AMD allow the use of NVIDIA’s nForce 500 series of chipsets in the AMD GAME! level to include more pre-existing systems out there rather than just cut it off completely for 100% AMD-based components.

What do these two levels of gaming system translate to?  Here you can see a collection of games that AMD has used to contrast titles from family gaming to FPS gaming; making sure these games meet minimum frame rate averages of 30 frames per second at 1600×1200 or 1280×1024 (for Ultra and standard AMD GAME! levels respectively) was AMD’s goal.  There is a decent array of titles used here and the methods by which AMD goes about this measurement seem relatively fair: a well balanced set of games and standard game testing practices.

One question that immediately came to mind while sitting and starting at this information was: will it actually help?  One of key problems with the PC gaming market (and that AMD agrees with) is that the variances in hardware, drivers, vendors and software make compatibility an issue and lead gamers into negative experiences that sour the PC as a gaming platform.  AMD’s goal was to try and prevent that issue by creating GAME! that would attempt to set certain standards for PC in order to guarantee a quality gaming experience.  However, you’d be foolish to think that AMD was going to spend their money and resources to quality Intel processors or NVIDIA GPUs into this “standard” – and that’s the major issue.  Instead of creating a “standard”, AMD has created a “competing standard”.

What the industry really needs, and what gamers would ultimately want, is for a non-corporate entity, say like the apparently-completely-useless PC Gaming Alliance (of which AMD is actually a member), to independently create these standards as a partnership between AMD, Intel, NVIDIA and the software creators themselves.  Instead we have AMD GAME!, NVIDIA’s sure-to-be-upcoming take on the “balanced PC” and, oh, don’t forget Intel’s penchant to create new platforms themselves.

Another problem lies in how these AMD GAME! and AMD GAME! Ultra standards will be updated.  AMD said that they will continuously re-evaluate the hardware on each platform to see if the newer game titles require an updated GPU or CPU, for example, but they didn’t exactly have a plan on how to implement those changes.  Initially they seem to indicate that the logos and names would be the same after a hardware change – but then how would a user differentiate between previous generations?  Might we see AMD GAME! Ultra 2.0?  Or AMD GAME! SUPER DUPER Ultra?  And how often will changes be made?  Consoles can be successful in this area because the hardware platform remains the same for 5+ years while PC gaming hardware is constantly in flux – if AMD GAME! is updated every 6-12 months, can it still be useful for gamers and developers?

We should not overlook the fact that while the constantly changing PC hardware from different vendors with different drivers is a problem for PC gaming, it is also what makes PC gaming so much more rewarding to those that truly embrace it.  PC gamers get the technologies that consoles won’t see for many years, often at a price premium of course, and get to see revolutionary titles like Crysis before dedicated console gamers have a clue.  There is a balance needed between the two extremes of console and PC and while AMD’s GAME! initiative is a strong move in the right direction; I simply cannot be excited about a proprietary solution to the problem. 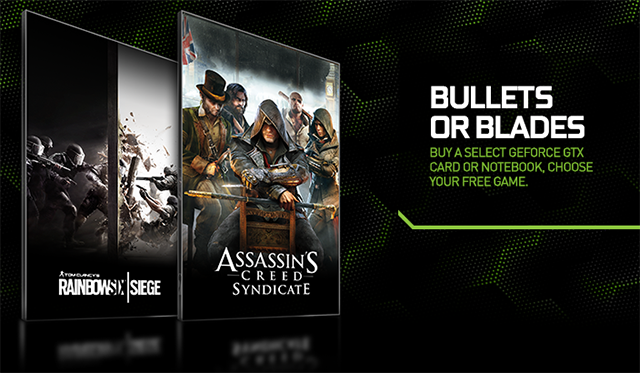