VIA took this chance, with the introduction of the Nano processor and platform, to update the mini-ITX form factor that they created with a 2.0 revision. 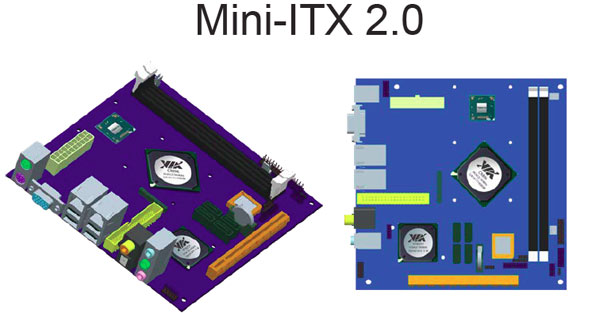 Most of the physical characteristics of the design remain the same: 17cm x 17cm PCB footprint, a focus on tight power consumption and high levels of feature integration on-board.  The design is an evolution in the most basic sense and is essentially an attempt by VIA to “call out” Intel for closing down mini-ITX on their platforms.  With phrases like “no artificial restrictions on features and performance” and “freedom of choice for graphics and operating system configurations” in the VIA presentation, it is obvious that the company is more than slightly miffed about Intel’s decision to come in, use the standard they created, and close it down.

And while there isn’t anything that VIA can actually DO about it, they can be sure to market their products and work with partners that also see their point of view on these types of things.  And who else is currently in a pissing match with Intel?  Exactly. 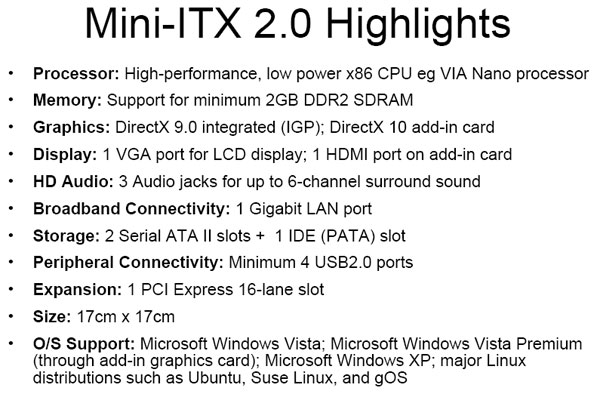 The list of features that VIA’s open mini-ITX platform offers is pretty impressive: you can see they are leaving it open for C7, Nano or future processors, the boards MUST support 2GB of memory though it isn’t apparent if that means two DIMM slots or not, IGP or optional DX10-ready add-in graphics, 6-channel audio, Gigabit networking, SATA and PATA storage and much more. 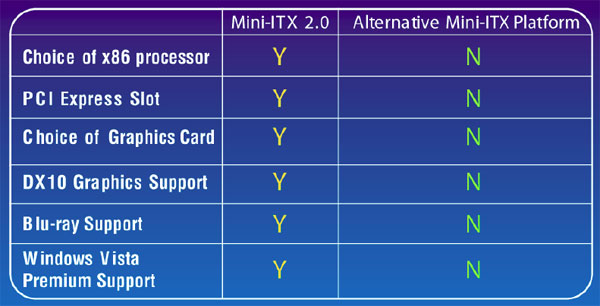 This final slide provided by VIA shows the “high points” for the mini-ITX 2.0 open standard that VIA is creating compared to the “alternative” option that is obviously referring to Intel’s Atom mini-ITX.  The features that are notable are the ones that mention “choice” as well as support for HD video content, Vista Premium OS and DX10 graphics support.

Many people were expecting VIA and NVIDIA to announce a merger, or for NVIDIA to announce their plans to develop an integrated GPU chipset for VIA’s Nano processor.  Neither happened of course, but I think the latter is a lot closer than either company will divulge to us right now.  It would make sense – using a DX10-ready IGP solution would put Intel on the hot spot once again and the combined VIA/NVIDIA platform would be able to return to the single-board principle that it was really meant to be.  Maybe by this time next year VIA and NVIDIA will be ready to announce a much more encompassing business agreement…?

The gloves are officially off, and two out of three of Intel’s competitors are holding hands once again to work on a competing platform for the Atom architecture.  VIA’s mini-ITX 2.0 initiative has a lot of potential and I am eager to see what users of the technology, including creative enthusiasts and OEMs, develop with it.  I will be holding my judgment on the two products until after I get a hold of BOTH Intel’s and VIA’s options and compare them side by side.  Open platforms are an important part for the good of the community, but power and performance are just as important; until we get hands on with both we won’t be taking either company at their word.


Be sure to use our price checking engine to find the best prices on notebooks, and anything else you may want to buy! 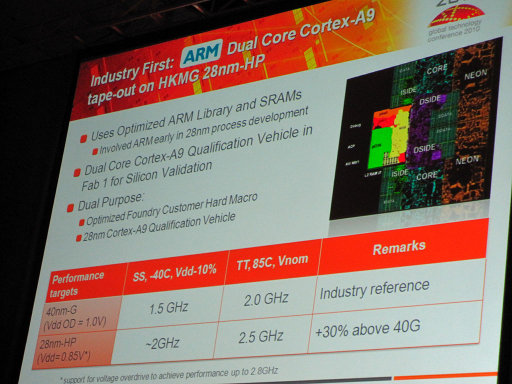